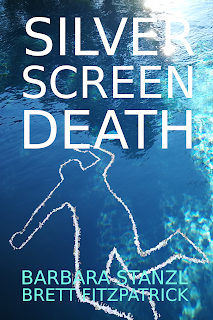 There is a long tradition of authors releasing their books one chapter at a time. During the 19th and early 20th centuries, this type of serialized novel dominated the market. Authors gradually revealed their works in installments, published either independently or within larger periodicals, over the course of several weeks or even months. Charles Dickens’s The Pickwick Papers ushered in this literary format’s era of influence not only in England, but across Europe. Alexandre Dumas and Leo Tolstoy both produced serialized works.

Carrying on this proud tradition, we are publishing Silver Screen Death chapter by chapter, so you don’ have to wait months for it to be completed before you can start enjoying it.

Silver Screen Death is a modern, fun, exciting crime story that keeps you guessing to the very end, and there is plenty happening to keep you entertained in every single chapter. It’s all killer and no filler.

The file is being hosted at Fetchapp, which is one of he few digital download platforms with a free tier to their services. Just hit the "Buy Now" button below, then Fetchapp takes you directly to Paypal, where Silver Screen Death (chapter 1) can be downloaded for just 99 cents.

Once you have downloaded the ebook to your phone, you’ll need an app to read it with. This article recommends a few. I like Lithium, (which is also free) but an ebook reader is very much a matter of taste.Use whatever reader you want, to enjoy the exciting crime thriller - Silver Screen Death.

Remember, click the button and you will be taken to Fetchapp, where you can download chapter one of Silver Screen Death for 99 cents.