I had a go at Second Life today 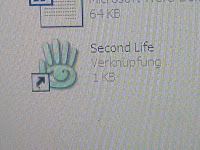 I do most of my web work in a couple of hours on Saturday while my girlfriend is at work in the local British Bookshop. I nip out and meet her for lunch as well, so I have only a few hours a week to work on my web prescence. I was talking to a student yesterday who shares the same goals as me of one day getting enough work through the internet to have that as your main source of income. We were talking about various things related to this subject, like social networking sites and Office Live, when she mentioned that she was experimenting with Second Life.
I'm in two minds about this idea but I decided to give it a try. I was not enourmously impressed after my first go. I created an Avatar but I couldnt get him to walk forward. I managed to get him to turn but a few MB of information seemed to flow from and to my computer just to do this. I compared what I had achieved to my goals. Tell people about me and my company, leave links to my site in places where the Google spiders are likely to find them and most importantly get translation work which is the bread and butter of my site.
I achieved none of this and only narrowly avoided giving out my credit card details to pay pall so they could use it for what they called "unlimited access" and they would have charged me to do this. Another of my overiding guidelines is that I should not have to spend mony. Only a few thousand of the claimed 3 million members were on line and I just thought this was more of an attempt to turn the World of Warcraft or one of those other multi player games into a Sims type more accessible version, this other stuff about it being the future of E-commerce seemed to be Hype to me.
I must warn you though that I thought the whole internet phenomenon was a passing phase.
Lunch with my girlfriend Babsi (the other half of www.spiralcat.co.uk) at Cafe Kafka today on the other hand was lovely, well worth a visit by any tourist to Vienna. 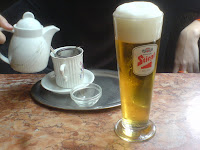 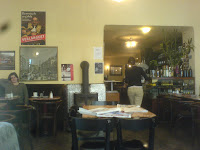