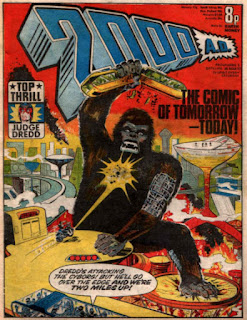 This page is where I collect all the posts I have written about the grande dame of British comic books, a publication named 2000 AD, and some posts about related titles, such as its glossy, high-brow, European-style stablemate Starlord.

2000 AD was first published in 1977 as a swift cash-in project on the back of the huge popularity of Star Wars, and even though it had built in obsolescence with its then futuristic title, and even though the smart money was on it disappearing after a few issues, it is still with us.

At the time of writing, the publication has reached 2117 issues, and I intend to read all of them. All. Of. Them. And, not only that - I intend to write a blog post about every single, motherf**ing one of them. I don't have any particularly good reason to do this, nevertheless it shall be done.

Some of that journey will be a lot of fun for me. I remember reading some of these issues when they were first published, so there is a nice taste of nostalgia, and there are some absolute classics, featuring creative talents who went on to become giants of comic book writing and art.

Some of this journey will not be much fun, because 2000 AD, like any long-running publication, has some periods in its history where it lost its way. There are some diabolically bad issues out there to be read, and I shall read those ones, too.

Anyway, now that the project has been outlined, here is a listing of the posts I have written thus far. Most posts are about 2000 AD, but some posts are about the various short-lived sister titles and are slotted in among them, at the appropriate point in the chronology.