I keep wondering if I should be doing recaps of comic books from now instead of returning again and again to the comic books of the late 1970s. In fact, I'm not even reading all the comic books of the late 1970s, it is one particular publication that I keep coming back to, a British sci-fi anthology comic book launched to cash in on the mania for futuristic stuff that was kicked off when Star Wars hit the screens. I write a lot about 2000 AD, reading it was a very formative experience for me, and I still read it today. I have a 2000 AD page where I link to all the issues I have talked about on this site. 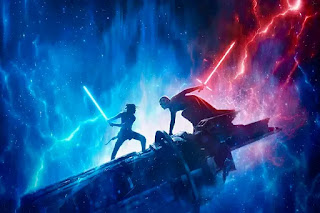 On the other hand, Star Wars is still with us, it's releasing number nine in the saga this Xmas. And, if the world is still obsessed with Star Wars, maybe it isn't so strange that 2000 AD still has a special place in my heart. So, with those rationalizations and justifications out of the way, let's take a look. 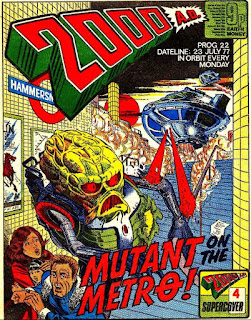 And, oof, but the cover is bad. The art on the cover of this issue certainly wouldn't find a place on a mainstream, professionally produced comic book of today. Ironically, many of the artists on 2000 AD of the time were producing art of a higher standard than you would see now – some of it inside the very issue. I think the problem is that instead of showing some action from within the comic book, starring one of the titles idiosyncratic and inventive characters, the cover is showing a generic piece of sci-fi action from a tiny short story on the editorial page. I can only assume they are trying to attract less sophisticated sci-fi fans with images they might be used to from the kind of 50s invasion stories popular before Star Wars changed the genre forever. I doubt it worked, and the sooner they stop trying and go back to the usual type of showcase cover for one of the strips inside the comic, the better.

Invasion is still the first story being presented every issue, and this week's installment is pretty interesting. It is drawn by Pino, who is a huge talent, and features a 3D protein printer that produces slabs of steak you can't differentiate from the taste of cow meat. That's a pretty optimistic prediction for 1999, even for a writer in the late 70s doing futurology for a time 20 years in the future. The story itself is a solid chunk of action-oriented malarkey. There is, however, one scene where it is strongly implied that the hero tortures an enemy soldier to death for information. I should note that 2000 AD is a problematic fave, and the story lines are often deplorable, as this one definitely is.

My heart beats a little faster with joy when I see that the next story is Shako. This is part of a short lived fad for stories about murderous animals that briefly came into being because of that other blockbuster movie of the late 70s, Jaws. This story isn't about a shark, though, it's about a polar bear. It is as entertainingly bloodthirsty as a B horror movie mixed with a less high-brow and pretentious version of The Terror. We also find out what is in the top secret capsule that Shako has eaten - the ostensible reason the C.I.A is hunting him. It turns out to be a viral weapon that liquefies bones, which is a powerful echo of one of the preoccupations of the time. This story came out at around the same time as the investigation into the strange death of Frank Olson and rumors of what he was working on were becoming more widely spread. This story is just great, and one of the characters is an Inuit, so I guess we score one for diversity. More importantly, Shako's body count just keeps climbing. He kills at least three people this episode, playing with some of them the way a cat plays with a mouse before they die.

After Invasion, which is a contemporary insurgent warfare story, and Shako which is killer-animal horror, next comes an actual sci-fi story. It is in the future sport genre, and it makes even wilder predictions about the future than Invasion's 3D meat printers. Here we see VTOL airliners the size of cruise ships, which is cool, but even at the time must have seemed unlikely. It's a shame that a story that is so progressive in its portrayal of the black players of the Harlem Heroes team, the protagonists of this strip, can be so retrograde and outright racist in its portrayal of the Japanese team they're playing. It makes what would otherwise have been a pretty cool episode into a very tough read.

Next comes the first real sci-fi story, in Dan Dare, but unfortunately it is space opera as pantomime. Alliances shift, people are captured and escape, just to be captured again, and escape again. With an entire galaxy to play in all we ever see are one or two locations and five or six characters, and they are ludicrous. A mutant made by stitching two people together and a mandog among them.

Next comes Mach 1, a story about a super spy who is an agent of British imperialism. This week he is protecting an oil installation in a fictional North African country from attacks by 'superstitious natives'. It turns out that the religious objections of the local population are being stirred up by their ruler, who wants the British out so he can sell the oil rights to 'eastern countries'. However, instead of cutting a deal, Mach 1 can't abide the way the local bigwig treats a serving girl, so violence, as always in Mach 1 stories, ensues. It is pure macho bullshit, of course, but the story does have weird geopolitical echoes that are still very relevant today. The one really jarring element, that I doubt would be seen in a comic book now, is the oil company is allowed to continue operations at the end of the story, after the local ruler has been killed, and everyone cheers the happy ending. I think that would be a little 'on the nose' for a modern reader.

Judge Dredd comes next, with art by Gibson who is a wild, sometimes almost cartoonish, talent but I do like his take on Mega City One and its Judges. Where Mach 1 is an agent of British imperialism, Judge Dredd is a terrifying vision of a fascist paramilitary police officer with the power to be judge jury and executioner. The difference between Mach 1 and Judge Dredd is that Dredd is satire. In fact Dredd is satirizing exactly the authoritarian tendencies seen so clearly in, Mach 1, the strip right before it. They both express a certain view of law, order, and power politics, however, so how much Dredd is presented as satire rather than hero also varies from strip to strip, and writer to writer. Here he is presented as a hero, even while using extreme violence (including burning down a hotel) to prevent mutants invading over the city's walls. It's problematic, but thought provoking, and the artwork is great. Make of 2000 AD from this era what you will (I can't unreservedly recommend it) but it does have something to say.