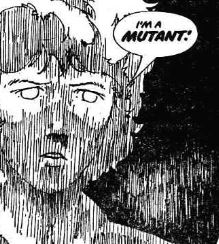 Here we have a cover that, for some reason, I remember to this day, even though I didn't buy this particular issue of the comic book back when it was first published. I guess that means the cover did its job, catching my attention and I seem to remember it even got me to open the comic up. I remember thinking long and hard about whether I should invest the 15 pence that the comic cost, and then... finally... deciding against it. Even though I have never bought every issue, I do love 2000 AD and I write a lot about it on this blog. Reading it was a very formative experience for me, and I still read it today. I have a 2000 AD page where I link to all the issues I have talked about on this site. 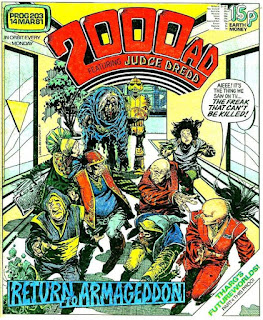 Like I said, I remember my eye was drawn to the cover by the art and I was intrigued by the title of the story chosen to feature that week, Return to Armageddon. It was a new word to me and I remember mispronouncing it in my mind as Armeegudon. It sounded evocative to me, like a story about an astronaut trying to get back to a planet he had lost somehow. I couldn't reconcile that idea with a cover depicting a robot and a mutant chasing people down an office corridor, which is what the cover looked like to me. The cover is by an artist I really like, Jesus Redondo, and it was fascinatingly strange, but as already stated, I did put the comic back on the rack in the end and that's where my memory ends. I probably went to the counter and spent my money on a Starbar or a copy of one of the Marvel Pocket Books instead. Life was full of tough choices for a kid in the very early 1980s on a limited amount of pocket money.


Flipping open the cover, the issue starts with Strontium Dog, which is drawn by another great artist, Carlos Ezquerra, and it is an important story called Portrait of a Mutant. It tells of events from Johnny Alpha’s past, the things that made him into the character we already knew very well after numerous appearances in the comic.

Johnny, it is revealed, is the mutant son of a politician called Kreelman, who has risen to power on a tide of intolerance and xenophobia, here in the future aimed at mutants rather that immigrants, the homeless, etc. of our own time. It is a parable that has timely echoes for the current political world of demagogues using intolerance and xenophobia to make their fortunes. These are powerful forces, and all too attractive to unthinking brutes with precious little else to offer. I think we all know who I’m talking about **cough** Trump **cough**.

We start this week's installment with the politician father slapping around his own son, just to underline what scum the man is. He also threatens his wife with the same, as the young Johnny Alpha is taken and locked in a tower, like a fair-tale princess.

He escapes and joins the mutant resistance, but of course he can’t tell them that he is the son of Kreelman, so this is when he gives himself the name Alpha. It isn’t a bad story, and I do like it, but compared to what you would usually read in a Strontium Dog strip - which is basically a space western - it’s a little dry. 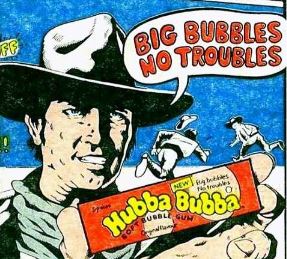 Next comes an advert for Hubba Bubba bubble gum, and I have to admit that the nostalgia of old candy advertising is no small part of the pleasure of reading these ancient comic books. As I remember, Hubba Bubba was pretty good as bubble gum. You could blow enormous bubbles with it, though you had to put the time in and practice, and the flavor faded very quickly.

The next strip is Return to Armageddon, the one from the cover, and the art by Redondo is gorgeous. The story itself, unfortunately is just weird and muddled. My love of Redondo’s work comes from when he was doing the art for Mind Wars, which was a much superior story. 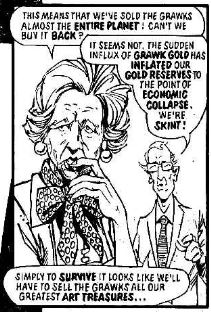 The next story is a Future Shock. A future shock is a one-shot, self-contained story that starts and ends in the same issue and usually has a twist ending. I was never a big fan of Future Shocks and this is not a great one. It goes on for page after page, and hinges on a twist based on the economics of visiting aliens flooding the Earth economy with gold and a bad pun on the word reservations. It was so bad it made me groan, but it does have a very nice caricature of Margaret Thatcher, who was Prime Minister of the UK at the time, unfortunately for the country. 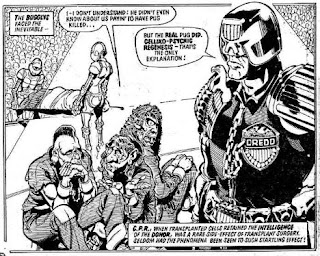 Finally we get to one of the dependable star of 2000 AD, Judge Dredd, but this strip is having an off day, too. It is a weird story about a rock group having plastic surgery to look ugly, and find fame. It's drawn by Ron Smith, and his weird bulbous drawing style makes the ugly characters look even worse. It is all a far cry from the cool and stylish visuals I like in a sci-fi story.

Dead last in the lineup of strips comes Meltdown Man, which is a weird story that is something like Alice in Wonderland meets Flash Gordon. A human is sent to a weird world of talking animals and has adventures. It never really rises above the level of okay, but it does manage to fall below.

After reading through this slightly substandard issue again after all these years it is no surprise to me that I ended up putting it back on the rack and spending my money on a Marvel UK comic book instead.