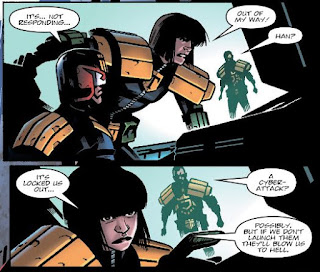 I write a lot about 2000 AD on this blog because reading it back in the 1970s and 80s was a very formative experience for me. In fact I have a 2000 AD page where I link to all the issues I have talked about on this site, and I've written a book collecting the posts. I haven't been a regular reader for a long time, but that might be changing. After getting back into reading this comic book last issue, which was a jumping on point full of new stories, I was very interested to see where all these new comic strips were going. So, let's take a look... 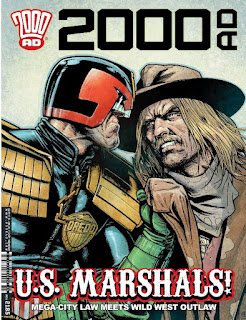 Dredd is on the cover this issue, but it is an uninspired composition. Just two tough guys, one of which we haven't gotten to know yet, squaring off and giving each other the stink eye. It looks like something from the cover of a wrestling magazine. 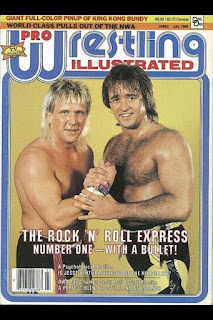 Luckily, the art of the actual story is much better. It is more skillfully rendered and more atmospherically lit, and there is a whole bunch of action. The Dredd story is first up and it starts with a storm. This storm then escalates to an explosion at Weather Control, and then to the threat of nuclear war over three pages of beautiful, futuristic art. Just as it seems the story might be something along the lines of the classic Apocalypse War, a whole bunch of Psi Division stuff is thrown into the mix. The psionic stuff isn't my favorite part of the Dredd universe, but I'm still liking this story, probably because of the beautiful art. 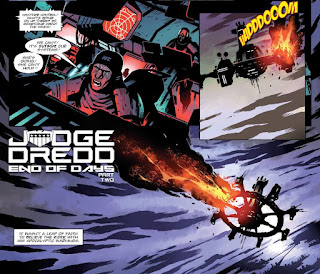 Sinister Dexter comes next and it is much less impressive in the art department. It's all close ups of talking heads against blank gray backgrounds, which isn't super visually engaging. Oh boy, the heads do a lot of talking. 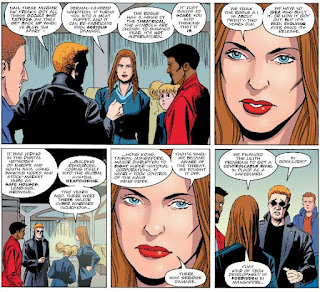 There is panel after panel stuffed with exposition, and it isn't even good exposition. It's like a Shadowrun module written by the least talented game master in your gaming group.
Then comes something very strange, the first installment of a story called Full Tilt Boogie. The art is extremely stylized, with some iffy looking people. One image of an Asian man even looked a little like a caricature. I hope maybe the artist's lack of skill at drawing human faces is to blame rather than racism, so we'll give it the benefit of the doubt for now.

Anyway, the spaceships and technology is great looking, like some of the work done by Moebius. The story starts in a very cosmic, old-school space opera kind of way, but unfortunately it quickly becomes very hard to follow. Maybe I can work out what is going on later, I hope so because I am intrigued.
Part two of The Order is next, which continues a generic-feeling alternate universes story. I'm a little checked out with it already. The team fought off a phalanx of robots without any hint that anything was at stake at any point. I never felt like anyone was in any danger at all. Maybe that is because the paintings are quite flat and lifeless, but more likely it's the writing.

And then comes The Diaboliks, which has a striking black and white art style. This shares the problem that the main characters are never in danger from the herds of mooks sent to fight them. It's about as exciting as the fights in an Asterix strip, where Asterix and Obelix knock out hundreds of centurions.
Of the five stories presented in this issue I liked the art of three, though only one had a truly engaging story, and yet I feel like I might have jumped back on board for the first time in many a long year. To end, just a reminder that the best way to support this blog is to buy one of my books. Simply go over to Amazon, or Kobo and get one.
Labels: 2000 AD British Comic Book Prog Slog