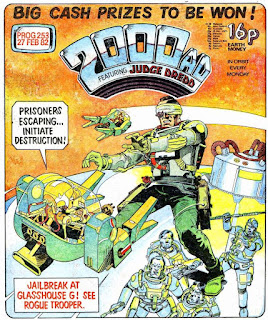 This issue has a rare cover by Colin Wilson. He's usually a dependable artist, especially at these kind of near-future drawings using photographic reference, rendered using clean lines, but there is something lacking in this image. The problem here is probably that he has to rely more on his imagination than usual. As a cover, with the strangely misshapen robot and lack of interest in the background, it is undeniably poor. 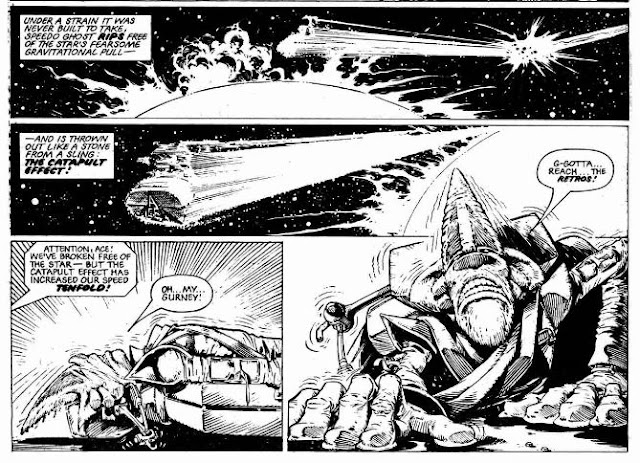 Ace Trucking is fun, but it is good that it us intended to be humorous because it plays fast and loose with physics. The slingshot maneuver it shows is no kind of space navigation that could actually happen. The spaceship actually turns ninety degrees as it escapes the gravitational pull of a star. 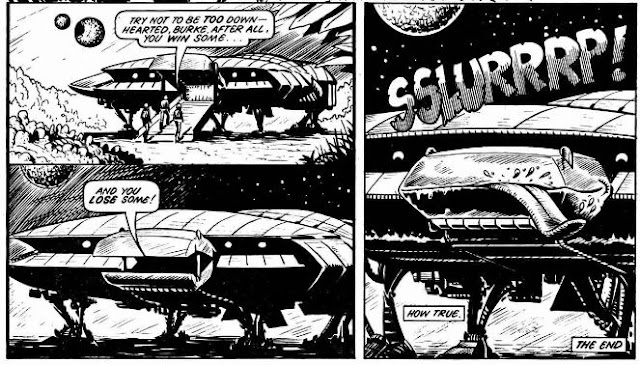 Then comes another Tharg's Future Shocks, once again written by Alan Moore, and once again, not hugely good. It is more of a joke than anything else, and not a very funny one. It's about a shape shifter pretending to be a spaceship, to eat the crew. I've snipped off the last few panels, which makes the story seem like it might be okay, but it isn't. 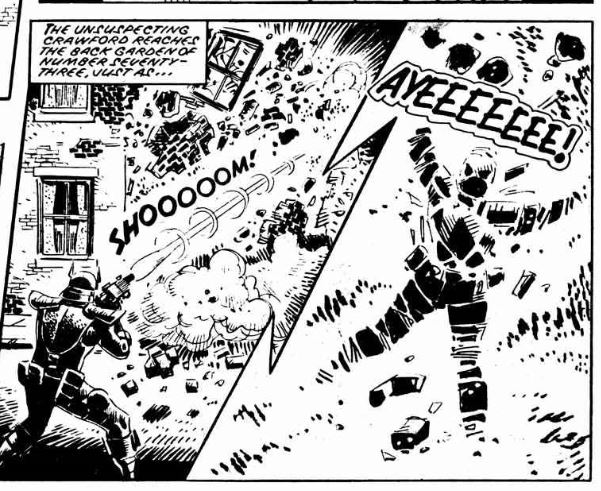 The next strip is Mean Arena, and I'm really enjoying it right now. It is completely stupid and bonkers, but a lot of fun. Matt Talon, this issue, uses a sonic blaster to take out a house and inadvertently kills one of his teammates. And they don't even stop the game. This is a really gladiatorial future sport, and the property damage is gleeful. 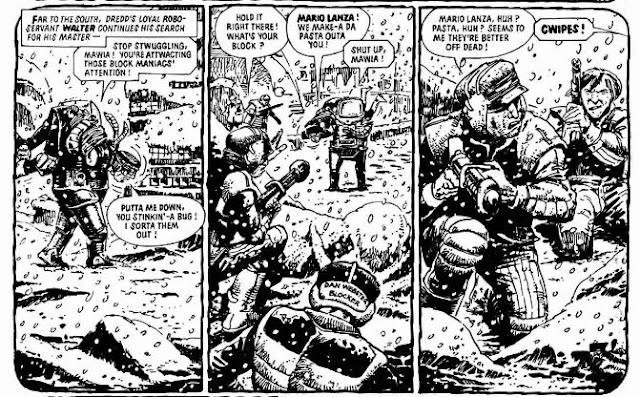 The Judge Dredd strip is still the slog that is the Apocalypse War, this issue with extra annoyance in the form of Dredd's robot servant and housekeeper. As a kid, I liked Walter the Robot, but I certainly don't now. His housekeeper is an even more annoying character, an offensive Italian mama character, but right now infected with Block Mania virus that makes her into a murderous loon. The story is a tough read, but there is a nice touch, where Dredd sabotages weather control, and it suddenly starts snowing. The images of Mega City One in the snow are actually quite beautiful.

Next comes Nemesis the Warlock, and mostly it just makes me wish it was being drawn by O'Neil instead of Redondo, all except one panel where he draws Torquemada's Imperial Starship, which is little more than a sketch, but looks great. Redondo is so good at drawing spaceships and action for space opera, it's a shame that he isn't given more opportunity to do so. 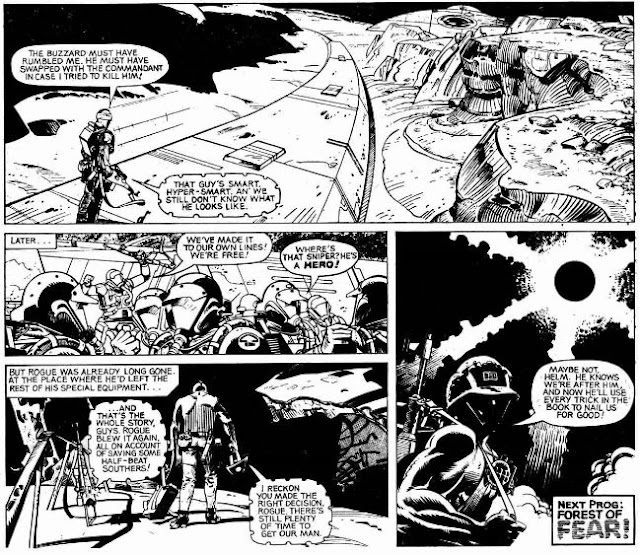 Then comes the story from the cover, and Wilson is much more comfortable drawing technology in small panels. He is also very evocative in his use of deep shadow, and in depicting a wasteland planet. It is beautiful stuff, even if it is just in the service of a brainless war and action story. 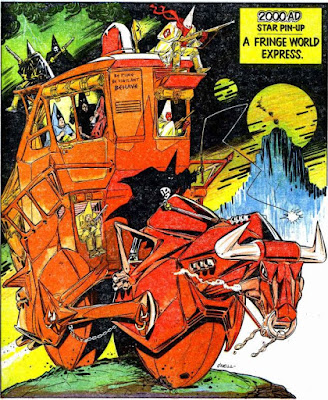 Finally, on the back cover, we get a single image drawn by O'Neil, and it is wonderful. It tells more of a story than the actual episode of the strip inside the comic, with its weird, giant spider shenanigans. It's a shame that all we're getting out of O'Neil right now is the occasional poster, because this is the golden age of Nemesis the Warlock, and the more work O'Neil does on it, the better. It's a lot of fun to just gaze at this image and let your imagination run wild. It's easy to imagine the kind of undeveloped and dangerous border world where transport like this might make sense.