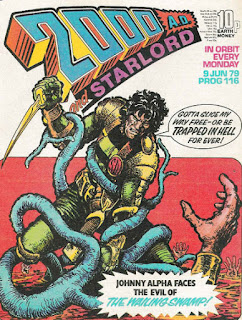 If you are a comic book collector, there is a good chance that you preserve your comic books in slabs of plastic, but this is a habit you may want to rethink. It’s actually very rare for a comic to retain its value, much less go up in price, no matter how well you protect them from the ravages of time. But don’t worry that doesn’t mean you should throw your comic books away. You can keep them, and one day read them all over again... just for fun. 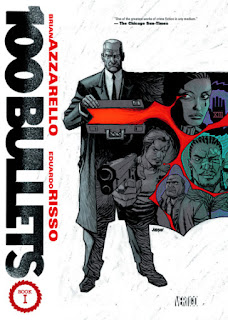 This makes a lot of sense for some titles that really lend themselves to being reread. In 100 Bullets, for example, the events in Atlantic City happen multiple times from different perspectives, so rereading the comic book is considered especially rewarding. 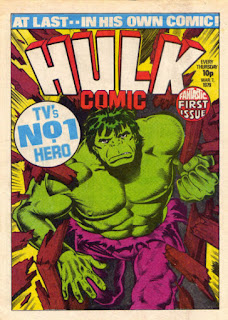 Also, we all have those comics that click with us at such a deep level that we can't help but keep returning to them. For me, that is a select list of old-time comic books that includes Starlord, 2000 AD, and Hulk Comic. On this blog, I write a lot about 2000 AD, because reading it was a very formative experience for me, and I still read it today. 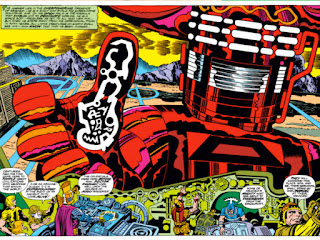 Lastly, for obvious reasons, no new Kirby stuff is being drawn, so the only way to enjoy it is to hunt out back issues and gaze in wonder at it there. Similarly, Mike McMahon’s current drawing style is very different now to what it was in the late 1970s, so to see his art in all its early glory, you have to look at back issues of 2000 AD, and that’s what I have been doing. I have been reading issue after issue of this ancient comic book, and writing blog posts about the fun I have. I have a 2000 AD page where I link to all the issues I have talked about on this site.


I have now reached issue 116 of 2000 AD in my journey, and it looks good. The cover is a work of art by Ezquerra, featuring one of the perennial heroes of 2000 AD, Johny Alpha, from the Strontium Dog story. He is hacking at blue vines that look like some abstract sculpture, with a macho snarl on his face. He and the blue vines are at the center of a red pool with hands reaching from the water, which looks like something from a surrealist painting. It is an intriguing cover with a hero in an action pose, which is all you can ask from a comic book cover. 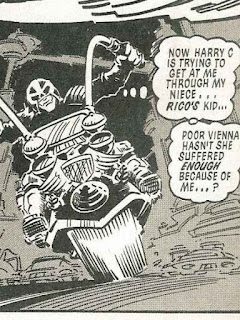 The first story this issue is another classic 2000 AD hero, Judge Dredd, but unusually he is drawn by Ian Gibson, and I have to say I like it. Gibson has a very sketchy and immediate style that adds excitement and interest to even pedestrian stories, like this one. 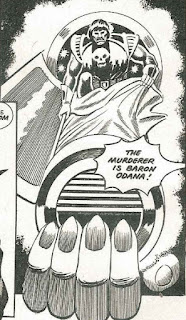 Next comes Rick Random, a short lived story written by Steve Moore that I remember liking. Steve Moore is said to have shown writer Alan Moore (no relation), then a struggling cartoonist, how to write comic scripts. He also wrote for Marvel UK, including stories for Hulk and Nick Fury, Agent of S.H.I.E.L.D. in Hulk Comic, my favorite from those long-ago days, alongside 2000 AD of course. The art on Rick Random is also very evocative and unusual, and I was quite disappointed that it wraps up so quickly, without being given more of a chance. 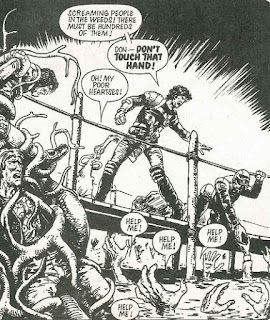 This issue’s Strontium Dog sees the story get back on the rails after a couple of issues where the story has lagged a little. Strontium Dog brakes the rules of the strange alien swamp he is stuck in and, as punishment, a huge serpent emerges to attack him. It’s actually quite sophisticated and unexpected in the story, and beautifully drawn by Ezquerra, as always. 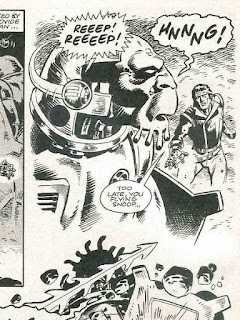 Next comes Dan Dare, which is paced very slowly. It is like they are experimenting with the very modern concept of decompression. Decompression is a stylistic storytelling choice characterized by a strong emphasis on visuals, which, usually leads to slower-moving plots. The style reared its ugly head in American comic books of the 1990s, and has been the cause of considerable controversy and debate among comics fandom ever since. This Dan Dare continues a battle with a monster we saw last time, and the battle isn’t over by the end of this issue. It is beautifully drawn, but they are dragging things out a wee bit too much. 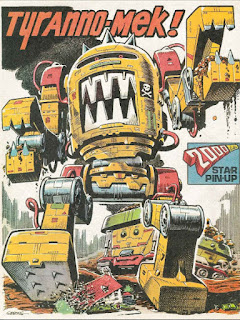 On the back, there is a poster of a giant robot called Tyranno-Mek, who we met a few issues ago in prog 100, and he is beautiful. Here we see him stamping on a puny human’s dwelling. This is not a classic issue of 2000 AD – not every issue can be – but it is still a lot of fun and the art is great. I absolutely enjoyed reading it again after all these years.