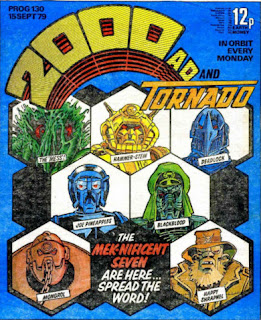 Reading 2000 AD in the late 1970s  was a very formative experience for me, and I have a 2000 AD page on this blog where I link to all the issues I have already talked about. This time, it is the turn of issue 130 of 2000 AD, which was published way back on the 15 September 1979, and it has a classic cover. It shows head shots of the robot cast of the ABC Warriors strip. The robots are drawn by Mike McMahon at the height of his powers, and with just the few pen strokes available in each hexagon, he gives every robot a unique character.

I love the graphic design of the cover, with a solid background of blue and an abstract pattern of hexagons dominating. I’m salivating to read the actual strip, just as I couldn’t wait to read it way back in 1979, when I was a kid. We have to wait though, because the first strip is...

A Judge Dredd story drawn by Gibbons that relies on outrageous Italian gangster stereotypes that have no place in any imagining of a future American megacity. At one point, one of the mob bosses says:

Don’ mess it up diss time.

And I groaned in annoyance. There is the nice idea that a head and brain can be kept alive and placed atop an android body, which is very pleasantly futuristic, but it is not enough to redeem the lamebrained storytelling.


The next story, Blackhawk, is so vanilla – despite having a black lead character – that I remember not being able to bring myself to read it back when I first bought this comic book, at least four decades ago. And, all these years later, with the longer attention span and greater concentration of adulthood, I still can’t make myself read it.

I also remember that I didn’t mind the substandard episode of Judge Dredd, or the waste of space that was Blackhawk. I was only reading 2000 AD for ABC Warriors at this point. And ABC Warriors is the next strip... yay... but not drawn by the same artist as the cover... boo. 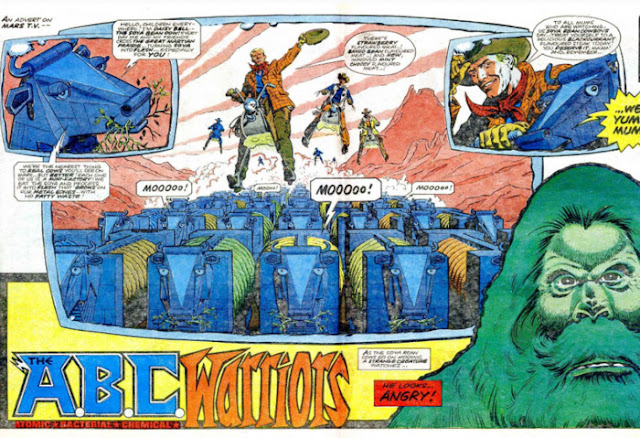 I remember my disappointment at seeing the disciplined penmanship of Gibbons, instead of the sketchy brilliance of McMahon that we got a glimpse of on the cover. I soon got over my disappointment though, because it is a ripsnorter of a story by Pat Mills. It is about robot cows taking over Mars in the future, the way real cows have taken over our planet today. Each cow is a mini-robot factory that trundles across Martian wastes, eating soy beans and growing fake meat on their metal bones. I’m a vegan these days, at least I try to be, and I wonder if the seeds of this were sown way back then. 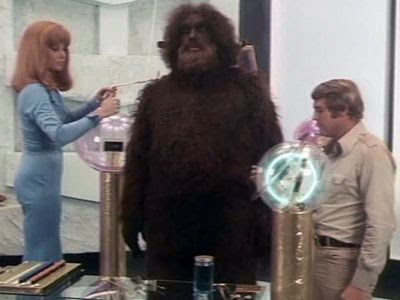 The story gets even better when a bunch of Big-Foot-looking monsters turn up. Big Foot was so popular back in the late 70s, it’s just amazing to remember. The Legend of Boggy Creek came out in 1972, claiming to be a true story of the beast who was roaming the woods and creeks of Fouke, Arkansas. Then Andre the Giant played the Sasquatch on The Six-Million Dollar Man, but Big Foot was a bionic robot from another planet, and not a native of the American Pacific northwest. He took orders from an alien played by Stefanie Powers, and was a strong and resourceful a combatant. Great stuff.

The ABC Warriors story isn’t perfect. I suppose the writer was thinking of native tribes and indigenous peoples when creating the murderous Big-Foot-alikes, which isn’t cool. These monsters are called cyboons and the writer’s attitudes to them are like those of writers of old-school Westerns, where the native Americans are portrayed as savages.

After ABC Warriors, the next stories, The Mind of Wolfie Smith, and Disaster 1990! are both a waste of space. But I will keep reading this thing as long as the ABC Warriors keeps appearing in it. Hopefully, Mike McMahon will be back on art duties – inside the comic book as well as on the cover – soon.