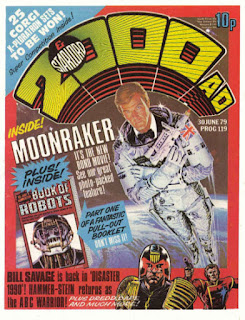 Again I'm writing a post about 2000 AD, an issue from many years ago, because reading this comic book was a very formative experience for me. I have a 2000 AD page where I link to all the issues I have talked about on this site.

You can see how old this issue is from the cover, where we have Roger Moore, in his starring role in the Bond movie, Moonraker. This is the 007 movie that was bit by the late 70s sci-fi bug. In the movie, Bond investigates the theft of a space shuttle, with stops in Venice, Rio de Janeiro, and the Amazon rainforest, and finally... space.

According to Wikipedia: The film’s producers had originally intended to film For Your Eyes Only, but instead chose this title due to the rise of the science fiction genre in the wake of the Star Wars phenomenon. Budgetary issues caused the film to be primarily shot in France, with locations also in Italy, Brazil, Guatemala and the United States. 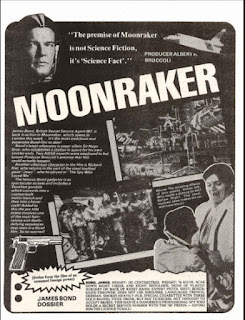 Despite mixed reviews, it eventually became the highest-grossing film of the 007 series with $210,300,000 worldwide, a record that stood until 1995's GoldenEye. Bond movies leave a bad taste in my mouth now, for lots of reasons but mostly 007’s misogyny. But back in 1979 I could not wait to see this thing. I was particularly pleased that the villain Jaws was back.


Along with all the excitement about the new Bond movie, this is also the issue where 2000 AD lost its original logo. I love the original logo, and I hated this replacement, though even worse ones would grace the covers of issues to come later, so this one now looks pretty good in comparison. 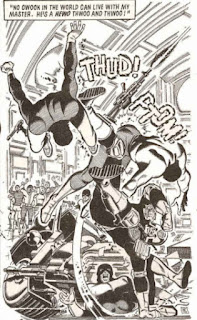 The first story this week, as almost every week, is the star of the comic book, Judge Dredd. This installment has the artist Ron Smith giving us his interpretation of Dredd as a superhero. This isn’t my favorite incarnation of Dredd - I prefer him as the tall, skinny, figure drawn by Mike McMahon – but I respect Smith’s art, and appreciate his love of superhero’s.

Along with the new logo we get a new strip this week called Disaster 1990. It starts with action, and it looks well drawn by our old friend Pino, who drew Ro-Busters when it was at Starlord. It’s a story of a giant flood, not caused by global warming - I’m not sure many suspected that would be a problem back in 1979 - but caused by a nuclear explosion melting the North Pole.

Things then sour a bit when we are treated to a chunk of lame-brained sexism. The lorry driver hero of this comic strip only watches the news because all the newsreaders are women. This is a weird example of British sexism but, even though I was a kid and didn’t really understand what was going on, I do remember the fuss. A blog about women’s film and TV history fills in the details: ...a particular form of licentious sexism greeted Angela Rippon and Anna Ford, when employed as newsreaders. Articles in the popular press discussed Rippon’s lips, the twinkle in Ford’s eyes, fantasized about them reading the news in black leather and, of course, called for their legs to be on view.

After this reminder of 70s sexism, the first installment finishes with London getting inundated, which is nicely drawn, but I already have mixed feelings about this strip. 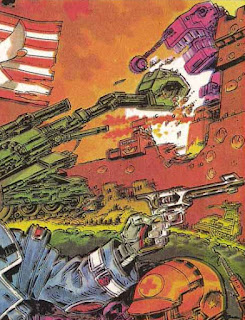 Just as I’m wondering why I’m reading old comic books from the late 1970s, something amazing arrives, the first installment of the ABC Warriors. These early episodes are classics, and have been reprinted numerous times. The artist on this one is by Kevin O’Neil, and while his figures are about as dynamic as Abercrombie and Fitch catalog models, the detail in the vistas he draws rewards scrutiny. In the background of the very first frame, for example, we have a giant tyrannosaurus robot with a wrecking balm attache to its snout – awesome. I loved the ABC Warriors, and read this strip over and over again, burning the art and story into my brain. I even remember that the color pages in my comic were printed with messed up registration, just like this scan of the issue I found on the internet. 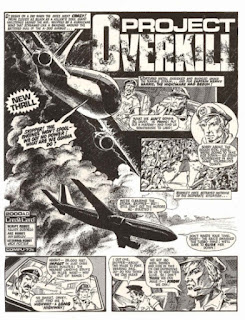 Then we get something called Project Overkill. ABC Warriors is burned into my memory, but I had completely forgotten the existence of Project Overkill. The story starts out quite intriguing, with strange figures dressed in hazmat suits kidnapping the passengers from a plane after an emergency landing. The pilot gets knocked out, comes round after a 48 hour blackout, and reads about his plane crashing, and no bodies being found. All really quite intriguing in a Lost-style mystery box kind of way. The art is by Ian Gibson, and it is great and is a good fit for the story. 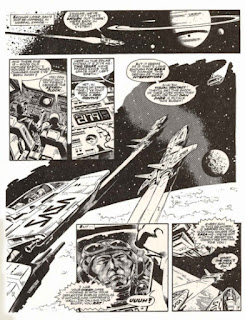 There is some more nice art in Dan Dare, by Dave Gibbons, including some very nicely designed space fighters. We see them swooshing in formation from one side of the page to the other, in nicely rendered detail. Dan Dare isn’t the most exciting strip, but it has improved since Dare escaped the swamp planet he has been stuck on.

And then this comic book is over. I can’t wait for the early installments of ABC Warriors to unfold over the coming weeks. This is going to be an absolute treat, if my memory is any guide.