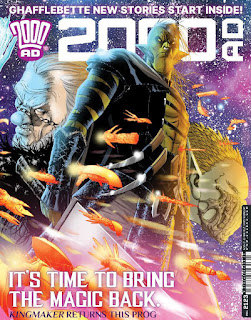 This week's cover initially looked awful, to me. At first I thought it was yet another Tharg cover, but when I worked out it wasn't, I saw that the central character has a manga-style giant sword. I was all set to hate it entirely, when I saw that the red shapes sprinkled across the image are tiny, tiny spaceships, hidden in plain sight. Any story with spaceships in deserves a chance, in my book, so I'll try and be open minded. 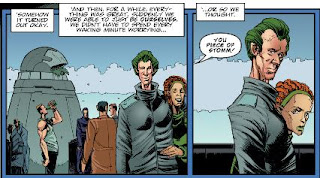 The first story, as usual, is Judge Dredd. Dredd has earned his position as "front dog" with decades of great stories, but this isn't one of them. It's all exposition, and no action. The whole thing is a heavy-handed story about immigration, which I guess is admirable, but In don't think it worked very well. The art wasn't very inspired either. I got no sense this story was happening in a future city, where people were wearing future fashions.


Next up is a story called Dungeons & Dating, which starts with an action splash and then goes back in time. Apparently:

Which made me smile.

The art by Neil Googe is great, if a little comic strip, Calvin and Hobbes style. I was admiring the art when the story made me smile again with a cinematic reaction shot as one of the character realizes he's been drugged. The writing is by Gordon Rennie and Emma Beeby, and I'm impressed. Humor in comic books is a very tricky thing to get right, but so far I'm enjoying this.

Next is that weird thing from the cover, called Kingmaker. The story and art are a little generic, in fact a lot generic. It was like a Dungeons and Dragons session written up, and made into a comic book. Generic fantasy, followed by more generic fantasy. I was wondering where the spaceships i glimpsed on the cover had gotten to, when the story swiftly swerved to horror and sci-fi. I don't know where this story is going and I don't know if it is good, but it is certainly intriguing.

Grey Area is next, with some nice sci-fi vehicles - I do like a sci-fi vehicles - but the story, if indeed this strip has one, is lost on me. It just seems to be random hard asses doing random things. The lady hard ass is dressed in a swim suit, and there's a pile of noodles, or maybe an explosion, at the end. This is referred to as a godstar weapon. Weird, impenetrable, sexist, but pretty to look at. I have very much soured on Grey Area. It's getting to the point where I am hate reading it now.

There's still just enough of interest to keep me coming back to 2000 AD, though. This was hardly a classic issue, but it was engaging and intriguing enough.