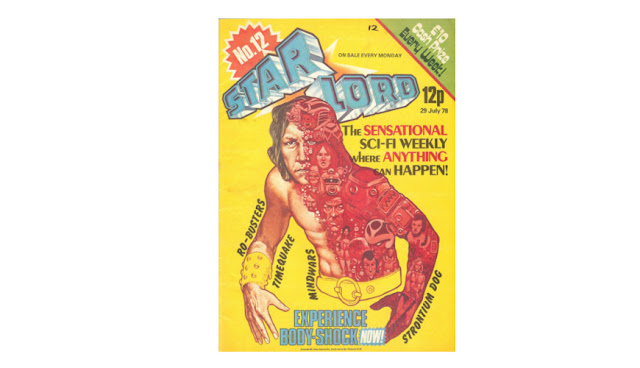 This is the twelfth post I’ve written about rereading an old comic book from my youth. This whole thing was prompted by scans of the entire run of the comic turning up on a website called Starlordcomic.com, allowing me to experience them again years later. It is actually a pretty frightening span of years later, as this issue of Starlord came out way back on the 29 July 78, about 40 years ago.
This is issue 12 of Starlord, and it was bought for me when I was on the way to a football match with my father. We were walking across Sunderland, from where he had parked his car, to Roker Park, to actually see the game. It’s a pretty grim walk, even in July, as you can see in this old video of Sunderland. It was shot in 1974, but not much had changed by 1978.

For some reason, dad popped into a newsagents, and I checked the racks for comics while he was buying a newspaper or whatever. I still remember seeing the latest issue of Starlord, already on display, and I was immediately tempted to buy it. I felt a little guilty getting it from the little shop dad hag gone into, because it wasn’t my usual newsagent, but I soon got over that. It was the new issue of Starlord and I had to have it.

It took some persuading to get dad to purchase it for me, understandably when you look at that the cover. Dad looked at this art, with its bold use of color and strange, sci-fi dude, and he asked if I really wanted this particular comic, instead of one of the more traditional-looking ones on the rack. It was certainly different to any of those other comics, which were the typical collection of funny titles, such as Whizzer and Chips, football titles like Tiger, and war titles like Battle. But, to his credit, he bought it for me.

I don’t remember, but I probably read it at the back of the concrete stands, ignoring the football match he had brought me to see. I never did get into football, but my love of sci-fi was already burning strong. I loved all thins sci-fi, and Starlord was some of the best sci-fi being published in the UK at that time. The unusual cover of this issue of Starlord, for example, is a nice example of 70s surrealist futurism. It’s an example of that intersection of pop-psychedelic surrealism and the space-age that was responsible for illustrations that were often better than the pulpy sci-fi novels within. I particularly like the guy’s leather wrist strap, because these were very popular with kids of the time. 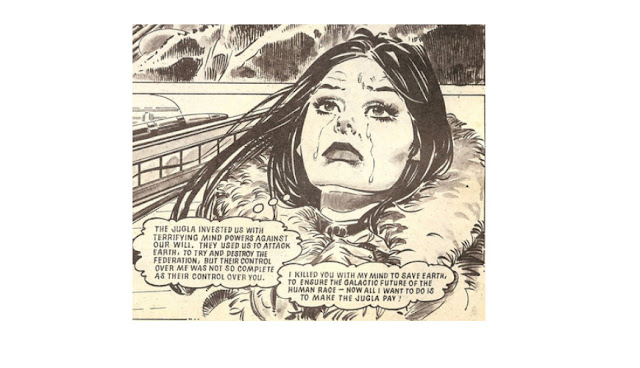 As usual, the first story in the comic is Mind Wars, and rereading it after all these years, I’m struck by the fact that it is even better than I remember. It has the usual fault of a serialized comic of the period, which is that a hell of a lot happens every week. Each episode has enough action to fill maybe three episodes of a modern comic. This week, Mind Wars starts with a longshot of a space port, followed by a closeup of the heroin, Ardeni’s face. The spaceport is bleak and empty and Ardeni is wrapped up in a fur coat with tears in her eyes as she watches the coffin of her brother being blasted off into space. It is very effective storytelling, and it reminds me of the video for Knowing Me, Knowing You, the hit single by Swedish pop group ABBA. It was released as a single the year before, in February 1977, but it is still very much of the time. 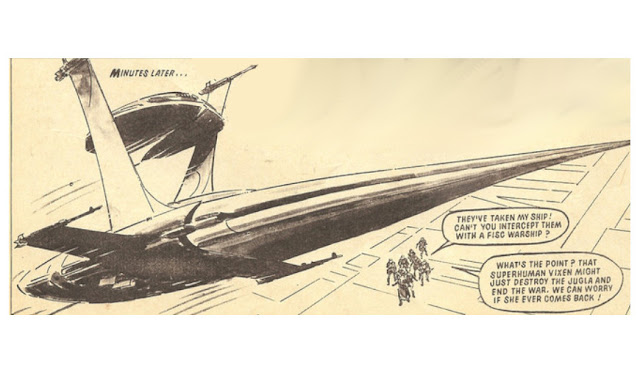 Ardeni also gets a new spaceship this week, the Vegan Belle, and it us a very nice design. The cockpit is placed between the back two vanes, or heat sinks, or whatever they are, and is not connected to the rest of the body at all. 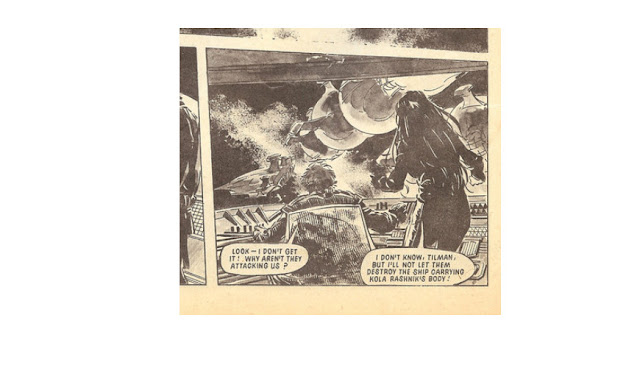 And there is a great image of Ardeni and her pilot, Tilman, looking at recently arrived enemy spaceships. Redondo’s washes of ink and confident lines really make you feel that you are on the bridge of the Vegan Belle, just behind the two heroes of the story. And it’s not just the spaceship, everything in Mind Wars this week is just sumptuously drawn and designed, from clothes, to locations, to the technology.


After Mind Wars comes another classic strip, Ro-Busters, and this week is the pay-off to several weeks’ worth of build up, where we have constantly been promised a robot rebellion. The bloodletting is now in full swing, and only Ro-Jaws and Hammerstein can stop it. Unfortunately Hammerstein was reprogrammed last week and forced to kill Ro-Jaws. Thankfully, after a bang on the head, Hammerstein is a good guy again, and Ro-Jaws, being a robot, can he jump started. Though here is some kind of time limit that isn’t explained in too much detail, and this is done just in time to save his life. 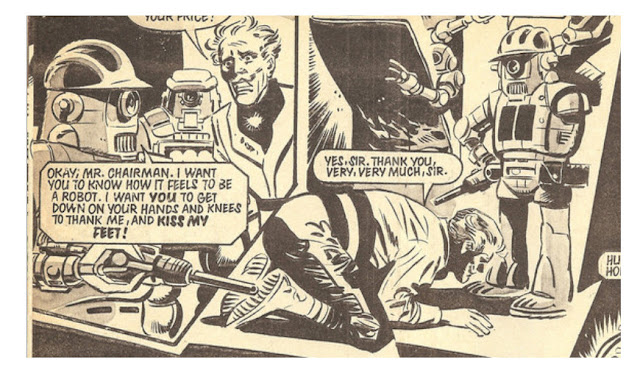 There is a great scene where the Ro-Busters refuse to rescue the humes unless they kiss the robots’ feet. Then the loyal robots take on the blood-thirst rebels. The robot vs robot action is superbly staged, and drawn with real vitality, as robots fight each other, the Ro-Busters in defense of their masters, while the revolutionaries are trying to kill them.

The rebellion is crushed and the old order soon reasserts itself. The humans are back in charge, and waste no time getting back to bossing their robots about. This gets Ro-Jaws and Hammerstein fantasizing about a real robot revolution that will leave humans extinct. 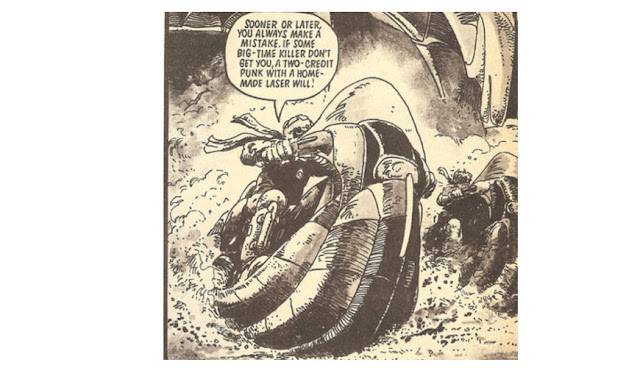 Next up is a Strontium Dog story, drawn by Ezquerra. On the very first page, our hero, Johnny Alpha, makes a classic entrance, striding in from the desert in chase of some lowlife. It’s an interesting episode of the strip, which spends a lot of time letting Johnny just hang around, being cool and saying macho things. He even has a cool, futuristic dirt bike, with a sled body instead of wheels.

This excellent, slow-paced episode is followed by something very different. Next up is a strip with a lot of running about, shouting, and shooting, with lots of huge text boxes to explain what is happening. It is a story called TimeQuake, hands down the worst of Starlord’s ongoing strips, at least thus far.

The back cover can’t come soon enough for me, and it is number two of the new Hardware Profiles the comic is doing. This one isn’t as interesting a model as the tank from last week. It’s just a rocket, but the skill on show is awesome. There are little lights on the rocket gantries that make it a very dark and moody image of future technology, combined with cars that were already old when the comic was published. It’s a nice end to a great issue, and I can’t wait for more. I’m already looking forward to the next issue.
Labels: Prog Slog Starlord