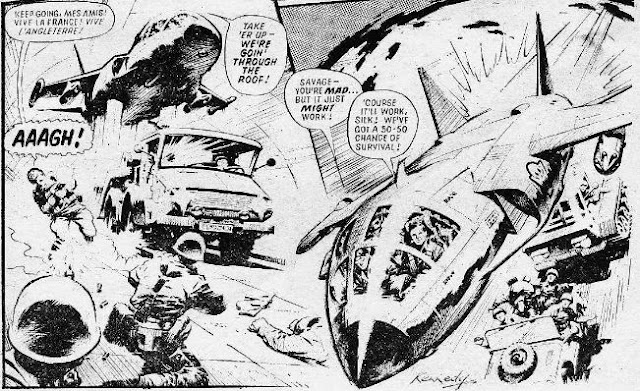 I’m still gradually reading my way through the entire history of a comic book called 2000 AD, and it is a comic book with a long history. It is a weekly British sci-fi anthology comic book that first appeared way back in February 1977. I am still in 1977 with this issue, number 36, so I still have about half a century’s worth of comic books yet to read. I’m also blogging about them as I go so something tells me that, even if the comic book wasn’t still being published, it is a task I am never likely to finish. But maybe gaining closure isn’t the point, maybe it’s all about the journey. I have a 2000 AD page where I link to all the issues I have talked about on this site. 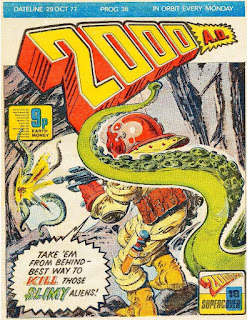 Any way this week’s cover is by César López Vera, who was from Madrid and was the very definition of an artist who was acraftsman rather than... well... an artist. He worked for an agency called Selecciones Ilustradas through the mid to late 1970s, and seems to have mostly been knocking out horror and fantasy illustrations. He certainly doesn’t seem to have had much interest in making this cover look anything but extremely generic. It’s more of a sketch than a finished piece, though I imagine it worked fine to announce the title as sci-fi on a crowded late 1970s rack of comic books. 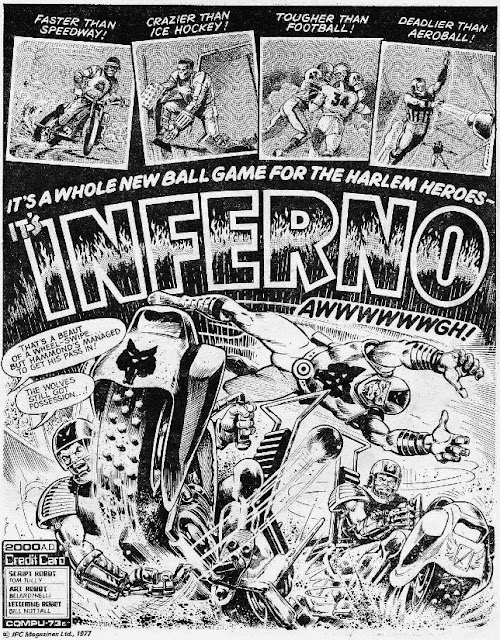 The first story this week, replacing Invasion in the coveted top spot are The Harlem Heroes, returning with a very new look, in a strip now titled Inferno. But before we talk about that, we should glance at the bottom left of the page. You see, this is a landmark issue of the comic book because... drum roll... it is the very first issue to feature the 2000AD credit card, which lists who wrote, illustrated and lettered each story in the comic. The art on Inferno is by Belardinelli, and he does a great job of making it all dynamic and exciting. Unfortunately the whole thing is very obviously inspired by Rollerball so original it is not. The jet pack sport played by the Harlem Heroes in their first story was a unique concept, and it is a shame to see it being thrown out in favor of this gladiatorial motorbike nonsense.

Next comes a classic installment of Invasion!, a story called Jump Jet, drawn by Ian Kennedy, that is so good it was reprinted in the 2000 AD annual that came out in 1984. Kennedy’s drawing of the jump jet being stolen from the back of a truck within the Channel Tunnel is just beautiful. Of course, at the time this comic book was published the Channel Tunnel was real sci-fi. Construction began far off in the future, form their point of view, as construction began in 1988 and it didn’t actually open until 1994.

Then comes a wonderful example of Tharg's Future Shocks. It is drawn by Kevin O’Neill, one of the most talented comic book artists ever to feverishly scratch incredible amounts of detail into each and every panel of his densely packed pages. The science doesn’t make any sense at all – the moon turns out to be a solid steel ball after it is nuked from orbit to get rid of the rock crust – but it is entertaining. Stupid, especially the ‘twist’ ending, but beautiful to gaze at and certainly entertaining. The sooner 2000 AD realizes O’Neil is not a talent to be wasted on one-offs like this and put him on a proper story the better. 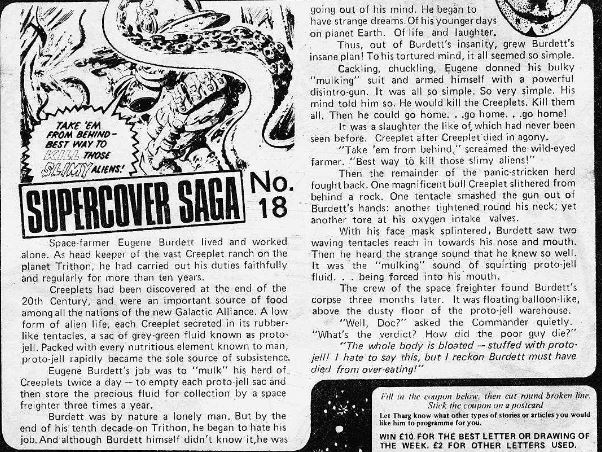 There is a story to go with the pedestrian cover, but it is just a couple of paragraphs of text, and doesn’t even seem to go with the image. The image is of a space soldier fighting aliens but the story is about a space farmer milking aliens. It’s all a bit slapdash. All generic covers like this do is hide hat makes 2000 AD so special. 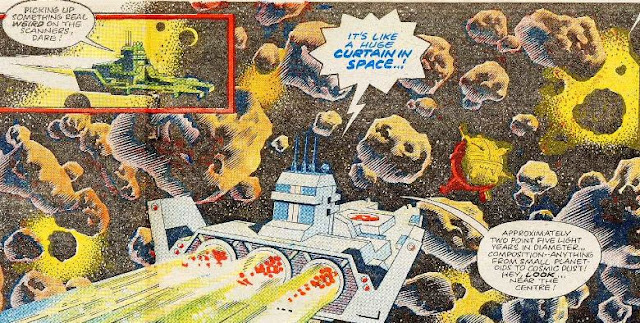 Dan Dare, as usual given the center spread of color pages and, as usual, drawn by Dave Gibbons. This is a great installment of space opera, one of my favorite genres, and it is all action. There are asteroids, a space fortress, and a small moon bristling with guns. In short this strip is everything sci-fi should be.

Mach 1 this week is pitted against a Mach Woman. It is drawn by the same artist as the cover, and he is much better suited to the present day action of this super-spy strip rather than futuristic sci-fi. I doubt that it is a coincidence that The Bionic Woman was on British TV at the same time as this female super spy appears in the strip. 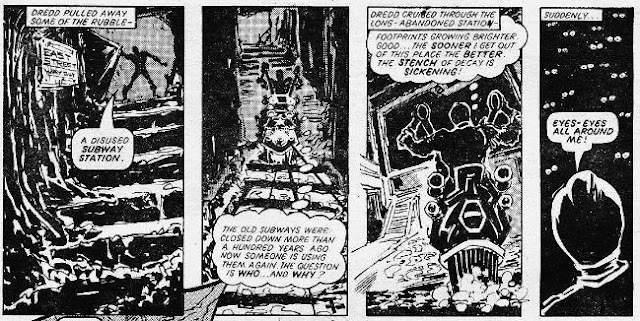 Judge Dredd is drawn by Ian Gibson this week, and it again features John Wagner’s obsession with the idea of future shock. Here he writes a story about recognizable 1970s caricatures, a hippy and a teddy boy for example, retreating below ground to avoid the stress of modern life and then mutating into troglodytes. It’s not a hugely likely stab at futurology, but you have to admire the way Wagner gives free rein to the bees in his bonnet. Here he is still writing about future shock four years after Future Shock, the 1972 short documentary film narrated by Orson Welles, was first screened. 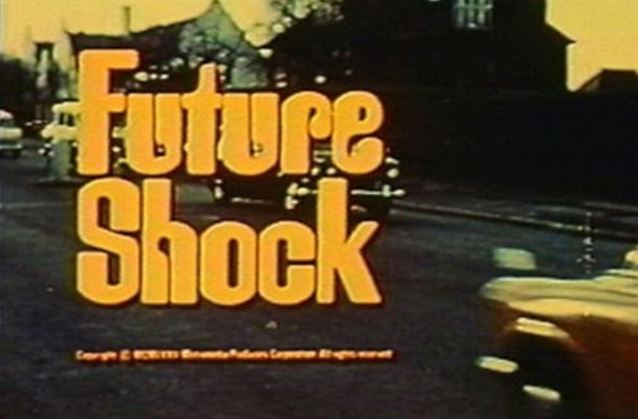 The term ‘future shock’ was invented in hugely bestselling book of the same name by Alvin Toffler’s and his wife, uncredited co-writer Heidi, where he defines it as a society that boggles the mind with an overload of information and an overload of consumer choices. 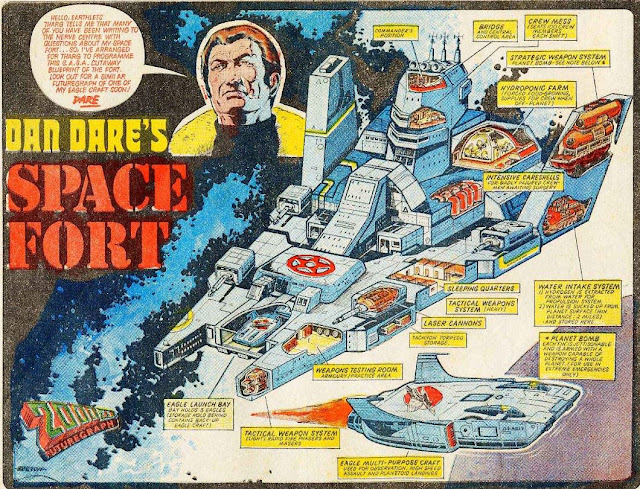 There is also a cutaway diagram of Dan Dare's Space Fort on the back of this issue. It’s not great, but it has a certain period charm. And there endeth a surprisingly good issue of 2000 AD. I mightily enjoyed reading it and will continue my task of reading every issue of this comic book ever published with renewed vigor.