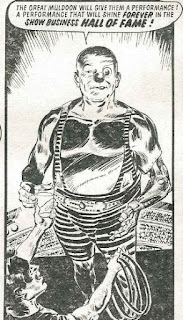 This is issue 133 of a comic called 2000 AD, which hit British newspaper shops way back in 1979, the sixth of October to be exact. Seeing the front page again, after all these years, I realized that it didn’t trigger the same hit of nostalgia with me that previous covers have. It suddenly occurred to me that this is because it is the first time I have seen it. This issue marks the start of one of the periods, some long, some short, where I stopped buying 2000 AD altogether. In fact, I would not buy another issue of this comic book until a couple of years later. The next issue I actually bought was issue 243, which came out on the nineteenth of December 1981. So I have a choice to make, do the laws of Prog Slogging demand that I read only the issues that I read when they originally came out, or should I just continue reading them all, whether I bought it way back when or not. You will be pleased to hear that I have decided to power through, so let’s take a first look at issue 133, an I will continue with 134 next time. 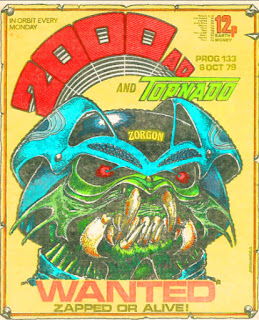 The cover is a disappointment, little more than a doodle. It might by one of the masters of 2000 AD art, Carlos Ezquerra, but it is just a floating head and has absolutely nothing to do with any of the stories inside the issue. I can imagine looking at it on the carousel in the newsagent, and just putting it back.


Judge Dredd is the first story, as usual, and it is drawn by an artist I don’t recognize named Barry Mitchell. I had to research him on the internet, and all I could find was this post on Downthetubes.net. Apparently, he mostly worked on football stories through the 1970s and 80s. The story is terrible, and the art is obviously done by somebody who is not at all comfortable with sci-fi. It’s just too small scale and not futuristic enough for Judge Dredd. It’s more like steam punk than Dread’s dystopian future city. I can only imagine that a Judge Dredd story got canceled or something, which is why this issue has ended up with a very substandard Dredd story and a doodle for a cover. 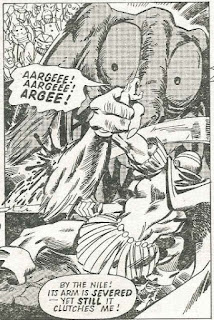 Next comes Black Hawk, a strip I do not enjoy now and didn’t enjoy back then. It too has an artist I don’t recognize, a guy called Joe Staton. He seems to be a bigger name than Barry Mitchell, and even has a Wikipedia page. According to his page:

Joe Staton started his comics career at Charlton Comics in 1971 and gained notability as the artist of the super-hero series E-Man. Staton produced art for various comics published by Charlton, Marvel Comics, and Warren Publishing during the 1970s. He illustrated stories including the origin of the JSA, the death of the Earth-Two Batman, and the Legion of Super-Heroes.

He seems to be much more involved in American comics than British ones, and it is strange to see him filling in on an episode of Black Hawk, of all things.

Next comes ABC Warriors, which is drawn by McMahon, a combination that usually hits all my sweet spots. This issue’s installment, however, isn’t... that... great. The strip is beautifully drawn, as usual, but it’s a weird one. The robots have to kill a small boy to save Mars from the disease that has been literally plaguing it. The small boy isn’t what he appears to be, he’s some kind of alien intelligence. The story still ends with an image of the heroic Hammerstein bludgeoning a child with his hammer. It’s not a good look for a hero, even if the worst of the deed is hidden behind a strategically placed rock.

After that, comes The Mind of Wolfie Smith and Disaster 1990! which are two stories with no particular redeeming features. Looking at this issue of 2000 AD, it is no surprise that I didn’t buy it. This period of 2000 AD was a real low point. Ro-Busters and Strontium Dog were gone, replaced by far inferior Black Hawk, Invasion 1999! and the Mind of Wolfie Smith. 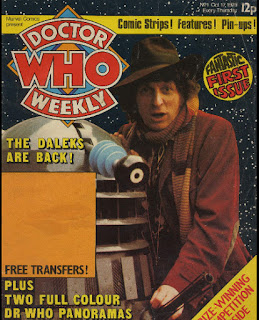 Now I know that Strontium Dog would be back, and that new great stories such as Rogue Trooper and Nemesis the Warlock would join the comic book in the future. I would return to 2000 AD, for sure, but only after a long gap. With a heavy heart, I paused my relationship with this great and historic comic book.

Did that mean I stopped reading comic books altogether, no it does not. I switched to a new comic book that hit the newspaper shop around that time. The first issue of Doctor Who Weekly.