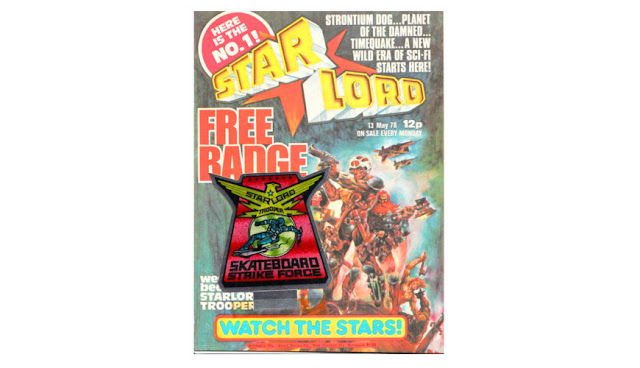 In my last post I talked about prog slogs, and how much I love them. A prog slog is where you read a swath of a comic book called 2000 AD, issue after ancient issue of it. Now I’ve decided to do a prog slog of my own but I'm not starting with 2000 AD. Instead I'm starting with a run of 22 comics of a title names Starlord, which was cancelled at issue 22 and then joined 2000 AD at prog 86, when the titles bacame one comic book named, unsurprisingly, 2000 AD and Starlord. Theoretically I could continue to read from there for thousands of issues - because 2000 AD is still going today, thirty or forty years later - but let’s stick to just the 22 issues of Starlord for now.

Okay... Let's get right to it, with [the first issue of Star Lord](http://www.starlordcomic.com/html/by_issue_001_01_cover.html), which can be found on the Internet, so anyone can read it, whether you have the comic books or not. Isn't the Internet great?

Cards on the table, I didn't read the first issue when I was a kid. I think it sold out quickly, because of the cool free gift of a bade that could be sewn on jeans, so I had to wait till later to catch the comic book. Or maybe it hadn't sold out, and I just didn't vibe with the cover. In a departure with most other comic books of the time, the cover is painted, but it is not great. It looks like fan art done in the style of Frank Frazzetta, which is why it might not have jumped out at me way back in May 1978. 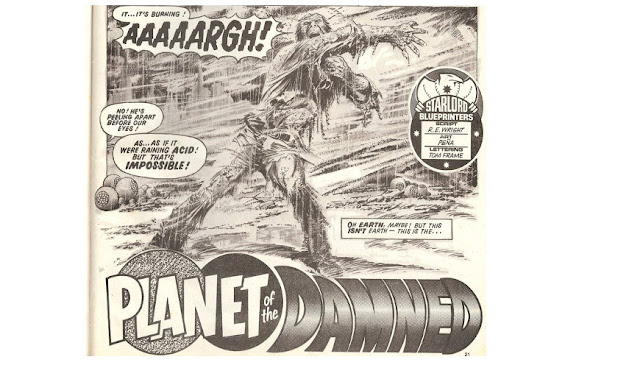 The first story is Planet of the Damned, which brings the first kick of nostalgia. One of the obsessions of the 1970s, was the Bermuda Triangle, perhaps because of Charlie Berlitz’s Bermuda Triangle, which was published in 1969 and sold more than twenty million copies. Whatever the reason, it was  was a pop-cultural phenomenon in the 1970s. This story takes this mystery as a jumping off point, and then runs with it. The strip makes the claim that lost ships and planes might have somehow punctured the Earth’s time-space continuum and ended up on another planet. It then shows their adventures on the new planet, the Planet of the Damned. As you might imagine, things on this planet are not good.

The visuals are by an artists named Horacio Lalia, and it is old-school and evocative. The story isn't bad either. This first installment is about a crashed airliner, like the setup to the series Lost, but in a much more inhospitable landscape than a Hawaiian island. One of the first characters introduced is a science fiction author named Hackmann. He writes a book about Captain Cosmo, who has the catchphrase, Solarific. As a sci-fi author myself, all his made me smile.


The real hero, however, is a muscular young man in a furry loincloth called Flint. I found the first installment of this story hugely enjoyable and I’m looking forward to reading more in the next issue. 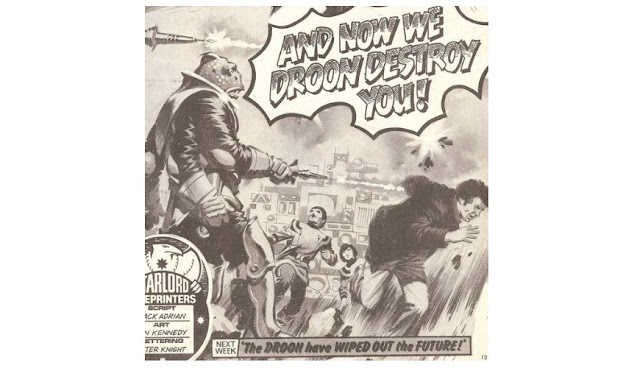 Next up we have TimeQuake, which is about a group of agents named Time Control, who have a base in Earth's dinosaur-infested prehistory. Their job is to police the timelines to ensure that time criminals didn't screw up history, and that their arch-foes the alien Droon from Rigel don't use history as a beachhead from which to attack Earth. This story didn’t grab me at the time, and I was also underwhelmed on rereading the first episode all these years later.It's just much more formulaic and less inventive than the other strips in this excellent comic book. 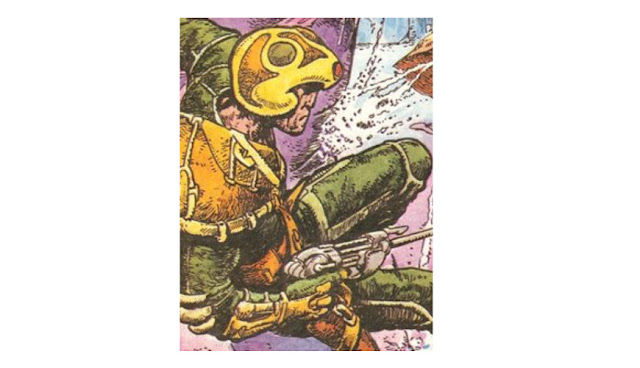 But after TimeQuake we have a much more impressive strip. This is the world’s first glimpse of Johnny Alpha, a brooding hero who will go on to make many more appearances, both in Stalord and 2000 AD. He is a mutant bounty hunter with an array of imaginative gadgets and weapons. The strip itself is called Strontium Dog and the art is by Carlos Ezquerra, and it is great. Just look at the beautifully delicate hatching in the shadows. Carlos Ezquerra started his career in Spain, drawing westerns and war stories for Spanish publishers but was headhunted to work in the new UK in 1974. It’s a very organic future that Johnny inhabits, thanks to Ezquerra’s art. The strip is basically just a western in space, but it transcends that and became so popular that it is still going strong today. I loved it from the get go. 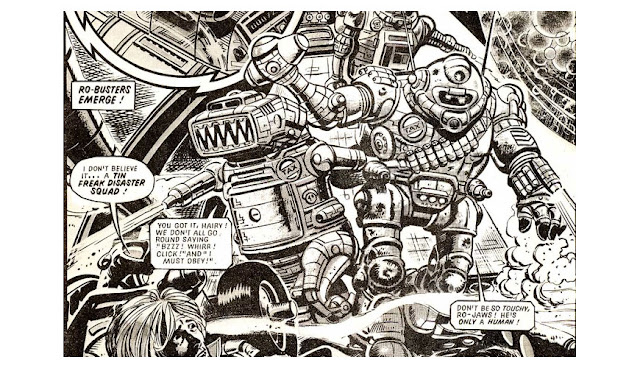 Next we have Ro-Busters, my favorite comic strip then, now and forever. The strip is set in a world where intelligent robots are ubiquitous and treated with contempt by humans. Ro-Busters is a commercial rescue organization run by Mr. 10 Per Cent, so called because the other 90% of him is robotic. He uses robots to carry out perilous rescue missions because no-one cares if they live or die. Ro-Jaws and Hammerstein, the two main characters, are hugely courageous but after each successful mission they are usually greeted with indifference by the authorities.

It is drawn by Carlos Pino, who had been drawing comic books since the 1950s. His art may be old school, but the ideas and designs in the story are eye catching despite the staid art. The much more modern, and very talent artist, Kevin O'Neill provided the initial designs for Ro-Busters but didn’t do any drawing on the series until later, after its move to 2000 AD.The mix of O'Neill's cutting-edge designs and Pino's old-school art gives the strip a unique flavor that I just love.

This first issue has been a lot of fun to read, and stands up pretty well, even after all this time. I am very much looking forward to the rest of the slog, which will probably take years.
Labels: 2000 AD British Comic Book Prog Slog Stalord