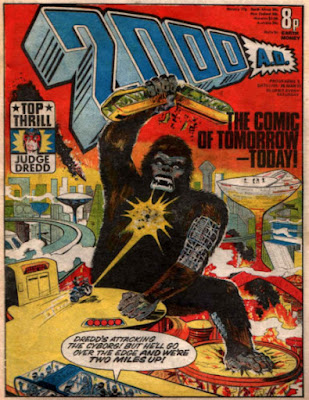 Over the last few days I have been reading prog slogs, for nostalgia, but also for sci-fi fun. I'm not proud of it, but it has brought me great pleasure, and it's no more a complete waste of time than looking at FaceBook's infinite scroll of cat videos and Russian bot posts. Okay... so you're probably wondering what a prog slog is, and why it has such a stupid name. Don't worry, I'll explain.

To understand what a prog slog is you have to understand what a prog is, and to understand that you need to know about an ancient British comic book named 2000 AD. It was a sci-fi comic that started in the 1970s, riding the wave of popularity of Star Wars. Instead of calling the weekly comics issues, like any other comic, they decided that their comic would be released in weekly progs. So instead of issue one, 2000ad starts with prog one. 2000 AD has now, at the time of writing, reached prog 2047.

A prog slog is where somebody reads through them all, all 2,047 of the blighters, from cover to cover, with some brave souls even throwing in annuals and summer specials and the like. It is not something to be undertaken by the feint of heart. A prog slog blog, is where somebody reads all these 2000 ADs, and also blogs about their experiences - mostly focused on how they no longer have any free time and they are slowly losing their mind. This whole thing seems to have been started by the first prog slog by Paul B Rainey. He describes his prog slog thusly:

I endeavor to read every issue, or prog, of 2000 AD and appropriate associated comics, specials and annuals published between number one and 1,188. Will this experiment result in, as Tharg the Mighty has warned of many times in his editorials over the years, thrill power overload or will I, like Morgan Spurlock in the documentary Supersize Me, end up being sick a lot and twenty five pounds heavier?

People can start a prog slog at any number, but my favorites are those brave people that start with the very first issue of 2000 AD, prog one. That’s not to say prog slogs through high numbers aren’t entertaining. This tumblr post] is from a prog slog blog entry by Judge Anon talking about Mother Earth from prog 867, or thereabouts. I had long stopped buying and reading 2000 AD by the time of prog 867, so it doesn’t have that hit of nostalgia for me, but it is interesting nonetheless.

Other prog slog blogs do go all the way back to prog one, however, and one of the most detailed is Everythingcomesbackto2000ad. Unfortunately the art was hosted at Imageshack, and is therefore now missing. Images stored in free accounts were deleted on January 31, 2016... argh! I noticed that the site had moved to the new address of Everythingcomesbackto2000ad, but the prog slog is not part of the new site, as far as I can see. Another detailed prog slog blog is the Back Prog Hack, but again there is no art on the blog.

My childhood was steeped in this comic book, and it is probably, no definitely, the reason I am now a sci-fi novel writer, with a few of these self-published works of fiction to my name.


I didn’t actually start reading 2000 AD at prog one, because I was a reader of a different comic book. It was a comic called Action, and I loved the strip called Hook Jaw. It was inspired by Jaws, in much the same way that 2000 AD was inspired by Star Wars. Here's a little on Hook Jaw from Wikipedia:


Hook Jaw was created as a Jaws cash-in and the flagship title of the comic. Hook Jaw is a Great White Shark and the hero of the series, even though he spends most of his time eating most of the human cast of characters. The name Hook Jaw comes from the gaff hook stuck in the shark's jaw after some fisherman tried to catch the creature shortly before being eaten by it. The writer gave the strip an environmental edge by having Hook Jaw eat corrupt humans, or criminals, seeking to exploit the seas, as well as anyone else unlucky enough to get near him.


When Action ceased being published, I moved onto a sci-fi comic book called Starlord. Starlord was a short-lived weekly British science fiction comic book with better quality paper and a higher cover price than 2000 AD. You can see scans of the original comics from way back then at this great Starlord site.

Star Lord was published by the same company as 2000 AD but they found that publishing two weekly science fiction titles split the market. Starlord, with its higher cover price, was cancelled after 22 issues and merged with 2000 AD in prog 86 of that title. Reading the Wikipedia page today, I just found out that Starlord was actually the better selling of the two titles, and the decision to end it was dictated purely by the higher production costs of Starlord as opposed to 2000 AD's cheap newsprint format. Back when I was a kid reading comics, I had always assumed 2000 AD was more popular. It’s gratifying, after all these years, to find out I was reading the more beloved title.

In fact, 2000 AD's line-up was hugely strengthened by subsuming Starlord, with the characters from Strontium Dog and Ro-Busters strips continuing on for years in the comic’s pages. I started and stopped reading 2000 AD for longer or shorter periods after starting at prog 86 when Starlord joined, and I love finding things like prog slogs that allow me to revisit these comic books from so long ago, and experience the enjoyment of their sci-fi goodies afresh.

You never know, I might even start my own slog...
Labels: 2000 AD British Comic Book Prog Slog Starlord