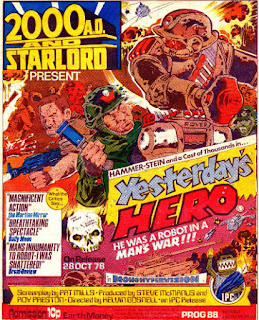 I used to read 2000 AD as a kid, and I’m doing it all over again. Specifically I’m reading old issues of the comic from the late 70s and early 80s. I no longer have my own old issues, but I found some scans that I have downloaded and I’m reading on my phone using Bubble.

This issue has a very unique, cinematic-style cover that I think is very effective. Thre are made up critics’ quotes from the Martian Mirror, the Daily Moon, and the Droid Review. It’s a weird and intricate piece of work, do it is no surprise that the signature in the lower left says Kevin O’Neil.

He created the Ro-Busters series that this cover image is taken from, along with writer and editor Patt Mills. O'Neill will go on to work with Mills on the famous Nemesis the Warlock, though that is a story for the future. This image is one of he first hints that the disaster squad story Ro-Busters will soon become more militaristic and transform into the war story ABC Warriors. 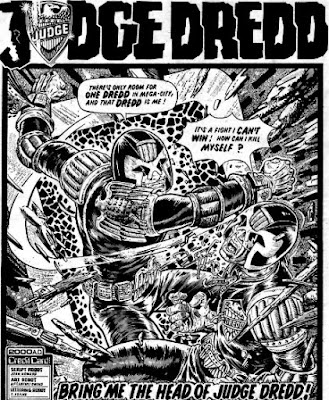 Inside the comic, the first story is Judge Dredd. Two artists are credited on the strip this week, but the work bears mostly the mark of Brett Ewins to my eye. Brett Ewins is an artist I am not totally in love with, even though he was undoubtedly talented.

His technology designs are very stylized, with little thought going into how the vehicles and equipment he draws might actually work. The fixed guns on the front of this vehicle, for example, are extremely ill conceived. The entire vehicle would need to be turned just to aim them. It’s just an impractical idea. 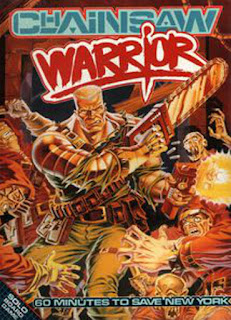 There were projects where Ewins’ art was a perfect fit, such as the Chainsaw Warrior game, but the future city of the Judge Dredd strip is not one of them. Sometimes there is a horror story involving Dredd, where Ewins works well, but usually he isn’t a great fit for this strip. 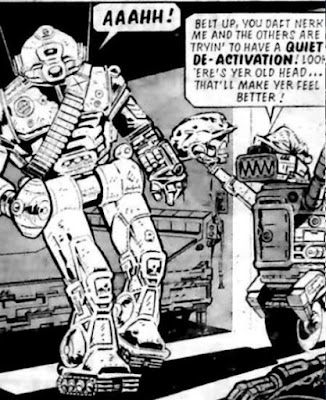 
Next we have Ro-Busters, and like the cover it’s the drawn by Kevin O’Neil, so it’s a real treat. It’s unusual for Ro-Busters in that it is purely a war story. The whole concept of a robot disaster squad is forgotten and Ro-Jaws only appears in a few panels. He’s telling Hammerstein that his groans and yells during his flashbacks are too loud and he should pipe down so the other robots can all have a peaceful deactivation. 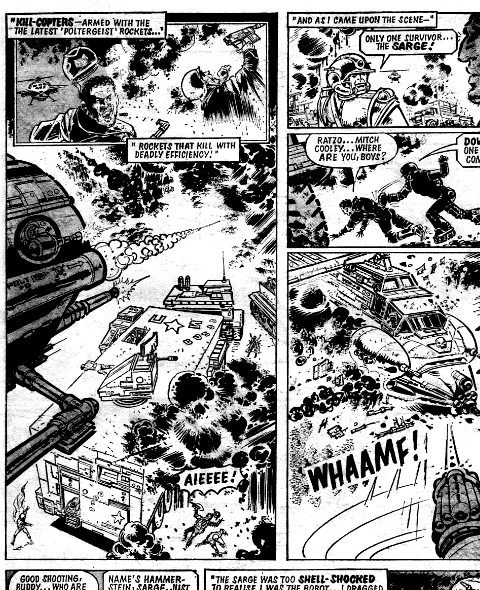 But the other robots want to hear his war stories. Kevin O’Neil does some great work making this vision of war a grotesque landscape of melted corpses and oversize war machines. It’s not the kind of Ro-Busters story that I had become used to from Starlord, or even the first two stories in 2000 AD. This is something new, and something good. We are taken on a journey where we examine the memories of one of the main characters, seeing what he was before, and how his past has left its mark on him now.

For the next story we go back in time, way back in time, to 200 million years BC, for a strip called Flesh. It’s an unusual time travel story and it is a good one, with the crazy premise that people from the future are going back in time to harvest fish to feed the overpopulated future population of Earth. It’s brutal, blue-collar stuff, about the people, pretty much exclusively men, sent back to do the actual harvesting, and it’s bloodthirsty. 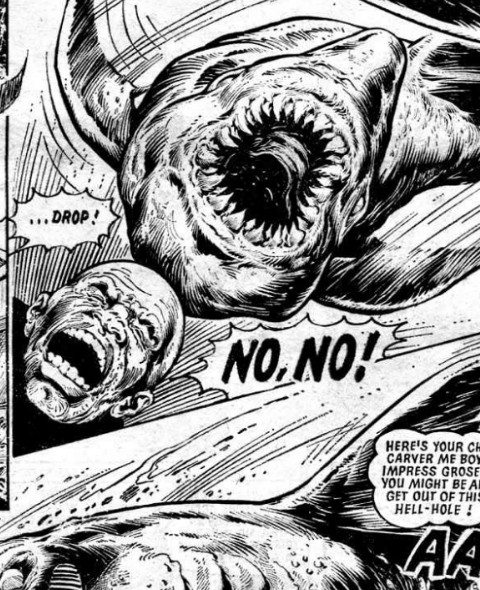 One guy gets a shark dropped on him half way through this week’s installment. Belardinelli’s art is passable in static scenes of people chatting in the work canteen, but where he really shines is in the way he draws prehistoric monsters. The shark dropping, open mouthed, onto its hapless victim is just great. It is certainly not something Trump would enjoy reading. Apparently the nincompoop is afraid of sharks. Stormy Daniels explains that he is obsessed with sharks. Terrified of sharks. He says he would never donate to any charity that helps sharks. He hopes all the sharks die. 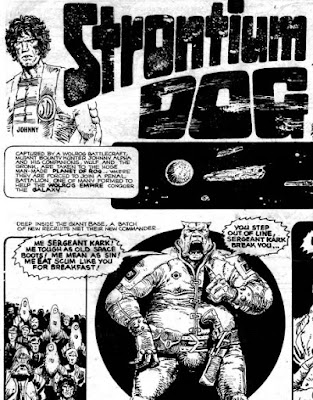 Next we have an installment in a great Strontium Dog story. Johnny Alpha and his pals have been captured by Wolrogs, and press-ganged into their army. There is a great cliffhanger when the Wolrogs get Johnny Alpha to fight his friend Wulf - to the death. The end of the fight is, of course, saved for next week. 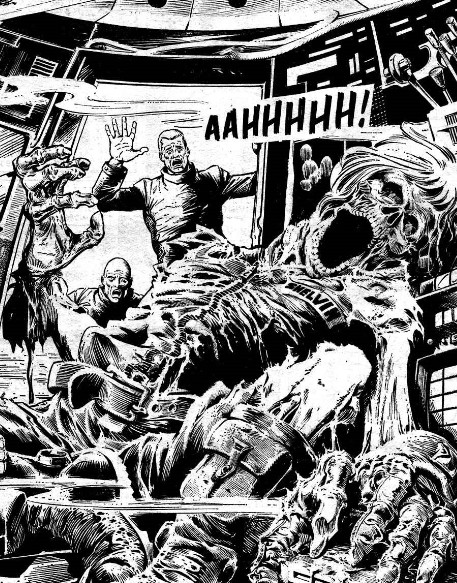 The next strip is something called Tharg’s Future Shocks, which is something like a sci-fi short story. Just like a traditional sci-fi short story, the convention is that it should have a twist ending, which this one does. Unfortunately it’s a twist any student of sci-fi will see coming from miles away. It’s about a time traveler who ends up suffering a terrible fate when time catches up with them. It is very nicely captured by Belardinelli, who has created an image akin something from a European horror comic. 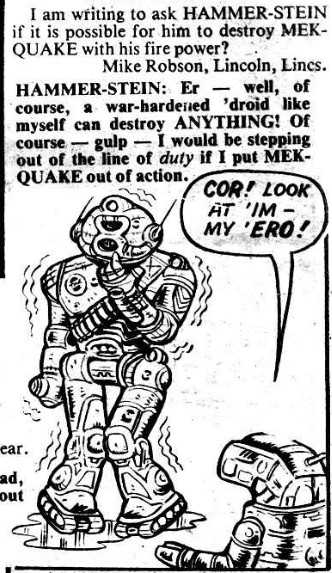 Then comes and editorial page called Ro-Jaws and Hammerstein’s Laugh-In. This week it contains an image that actually did make me smile. Mike Robson asks who would win if Hammerstein fought Mek-Quake. It is the age old question of comic book nerds down the ages. There are entire communities dedicated to pitting various conic book characters against each other in imaginary duels, and arguing about who will turn out victorious. 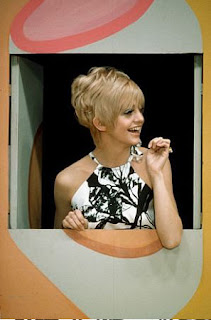 The name of this page of the comic book is undoubtedly inspired by Rowan and Martin's Laugh-In which was being shown on British TV at the time this issue of 2000 AD was published, long after it had been canceled in the USA.

Rowan & Martin's Laugh-In ran for 140 episodes from 1968 to 1973. It was hosted by comedians Dan Rowan and Dick Martin. The title of the show was a play on the "love-ins" or "be-ins" of the 1960s hippie culture, terms that were, in turn, derived from "sit-ins", common in protests associated with civil rights and antiwar demonstrations of the time. The show was characterized by a rapid-fire series of gags and sketches, many of which conveyed sexual innuendo or were politically charged. The co-hosts continued the exasperated straight man (Rowan) and "dumb" guy (Martin) act, which they had established as nightclub comics. As a kid, I remember my favorite part was when the heads popped out of little hatches to give punchlines. 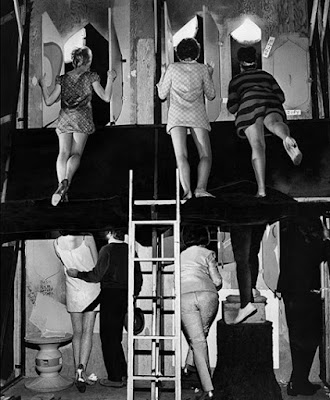 The segment was called the Joke Wall, and this is what it looked like from behind. Well, that’s enough of our trip back to the late 70s of comic books, along with the late 60s of TV. But don’t worry, there is more where that came from. 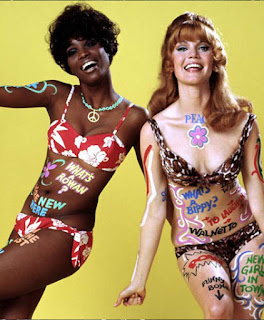