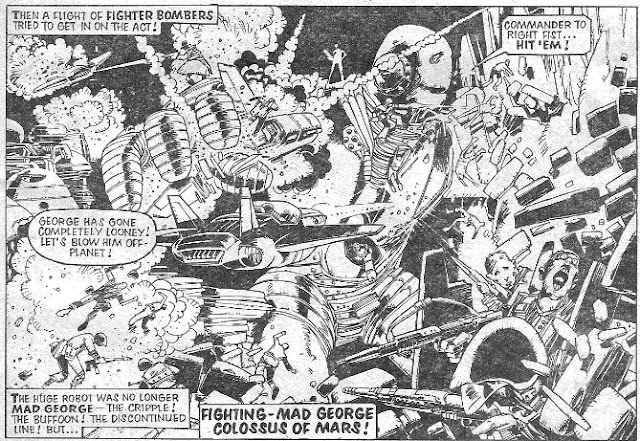 I've been going back and rereading some comic books from my youth lately, focusing specifically on issues of a comic book called 2000 AD. Reading this comic book it was a very formative experience for me, and I get a real kick out of reading it again today. I have a 2000 AD page where I link to all the issues I have talked about on this site because writing about them is almost as much fun as reading them. 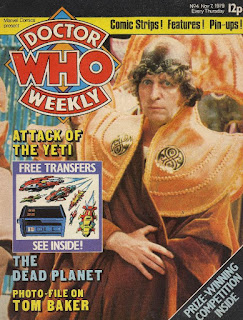 The issue of 2000 AD I'm looking at this time has a pretty uninspiring slate of stories, with ABC Warriors as the only real standout strip. And that meant that I didn’t buy it when it was first published. You see there was a shiny new comic book that had caught my eye and lured me away from 2000 AD, and that was the Doctor Who comic book. It even had a strip featuring one of 2000 AD’s best artists at the time, Dave Gibbons. Faced with a choice of a strange looking robot on the cover of a comic book with a mixed bag of stories or Tom Baker in his full pomp in his Time Lord regalia, with a story with art by Gibbons, it wasn’t difficult to decide. The Doctor Who comic book was also printed on glossy paper, rather than the newsprint used for 2000 AD.  I invested my pocket money in that rather than 2000 AD and I think I made the right decision. I’m only really reading it now for the sake of completeness. 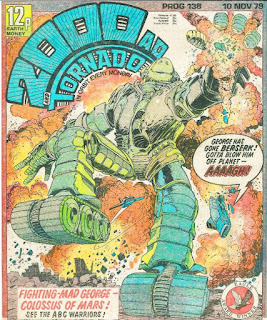 This may not be a classic issue, but the cover of number 138 is certainly beautiful. It is a giant robot, something I love, drawn by McMahon, an artist whose work I really enjoy. It’s a shame that the concept for this giant robot is an uncoordinated and goofy looking giant robot, rather than the usual cool ones of anime and Hollywood movies. But even a clumsy and stupid robot is cool if it is giant and drawn by McMahon. The way the volumetric explosions highlight his gunmetal color body in lime green is so cool.

This week the first strip inside the comic is Judge Dredd, and it is drawn by a second tier artist, maybe even third rate one, called Gary Leach. It’s an interesting enough story about the alien mercenaries sometimes seen in the Judge Dredd strip called the Kleggs, but the substandard art makes it hard to enjoy. 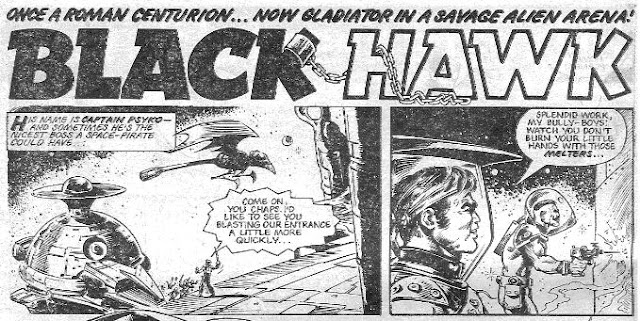 Black Hawk, is the next story and that has the opposite problem. It has a talented enough artist in Belardinelli, but the story is a garbled mess of grim gladiatorial fights, and they are not served well by Bellardinelli’s whimsical and inventive art.

Next comes ABC Warriors, which is the only strip this week to bring story and art together to make a satisfying strip. It has the giant robot, who is an interesting character, and uses its future setting to make interesting comments about the neoliberal economics that were new then but which still resonate very much reading the story today.

The politics of the story are about giant companies that are out of control and using violence to gain market position. After a few panels of build up we get to see George take out the base used by one of these corporations. Thee is some very satisfying and destructive action, drawn with the glee and detail that only McMahon is capable of. 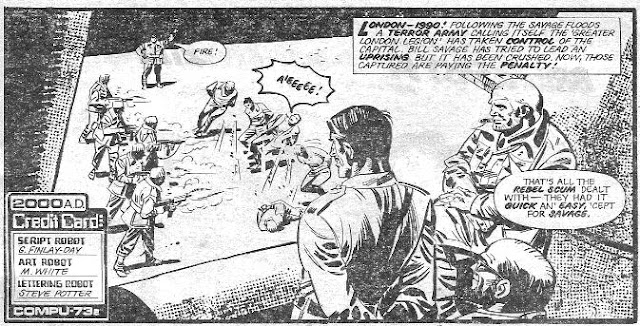 Then comes a bunch of other stories, including The Mind of Wolfie Smith, which is an interesting enough concept but not really sci-fi enough for 2000 AD, and Disaster 1990! which is even less sci-fi. Only its setting, an admittedly topical flooded UK is futuristic. The rest is just war-story-type action.