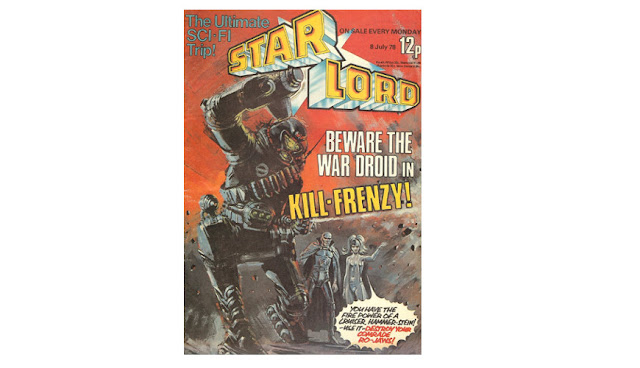 I am currently reading Starlord, what is Starlord I hear you ask? Is it some new comic book? Is it a book about that Marvel character? No, and no, in fact it is an ancient British comic book from 1978, a comic book I first read in childhood and which I am now reading again, decades later, to get cool sci-fi thrills along with a nice jolt of nostalgia. I have reached issue nine in my quest to read all 22, and it’s a doozy. For my money, issue nine has the best Starlord cover created during the comic’s sadly truncated 22 issue run. It relates to one of the strips being presented inside this week, which is unusual and a plus, and it features the strip’s star, front and center, in an action pose.

It also has the bad guys in the background, a couple of sinister robots in capes, saying something ominous, which is perfect. The way it is pained is also extremely effective. I imagine many fans would consider something like this to be unfinished, more of a sketch, but I disagree. The freer style of painting in this picture captures a sense of action and power that is often deadened and diluted in a more polished painting. That’s not to say the painting is entirely lacking in detail. The robot in a “kill frenzy” is designed by Kevin O’Neil, who is famous for his meticulously drawn and intricate works of comic-book art, but the actual painting is done by Carlos Pino. I think it is perhaps this mixture of expressive painting and attention to robot detail that works so well.


After gazing at the cover in awe for a few minutes it’s time to open the comic up and enjoy the sci-fi goodies within. As usual the first strip is a lively slice of space opera called Mind Wars, which is as always a beautiful thing to look at, thanks to the art of Jesus Redondo, and also a fun read. 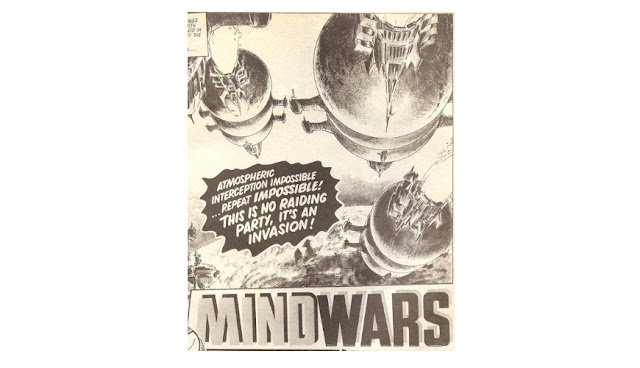 This episode of the ongoing story starts with an alien attack in Earth. But the invasion fleet of organic and insectile alien battle cruisers isn’t the biggest threat to Earth, it is two teen twins with exceptional mind powers. Here we see the female twin reading the mind of somebody creeping up behind her and her brother. 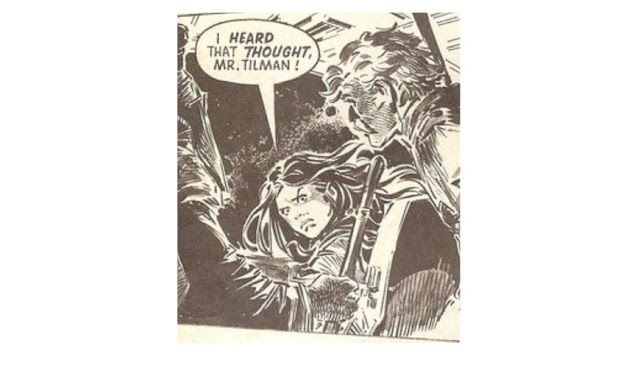 It turns out the attack on the planet was just a diversion to allow the twins to slip through Earth’s defenses and arrive on planet. The strip finishes this week’s installment with a nice close up of the Earth leader’s face as he realizes what has happened. 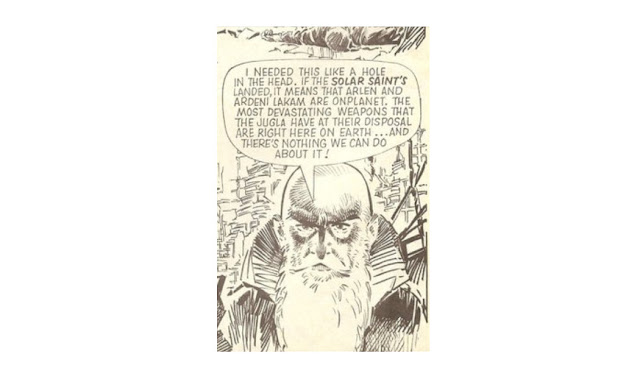 The next comic strip is Ro-Busters, about a disaster response team made up of second-hand and expendable robots. The heroes are an army surplus robot called Hammerstein, and a sewer robot called Ro-Jaws. They are trying to deal with a Westworld-style robot uprising at a luxury space hotel. So how does Hammerstein end up in a “kill frenzy”? 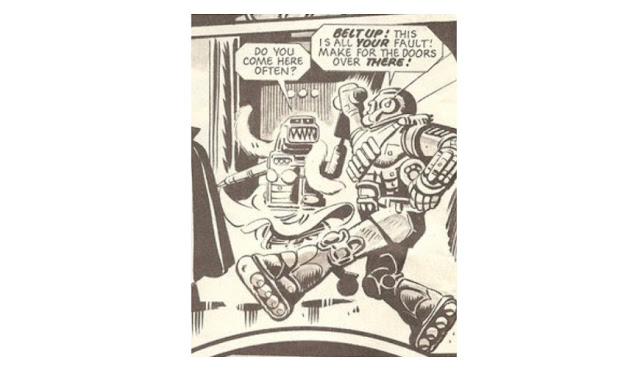 We have to wait to find out, because first our two heroes end up dancing on stage after an unlikely series of events, with the sewer robot dressed in a bra and skirt. It seems like it is written like it is intended to be funny, but it isn’t. 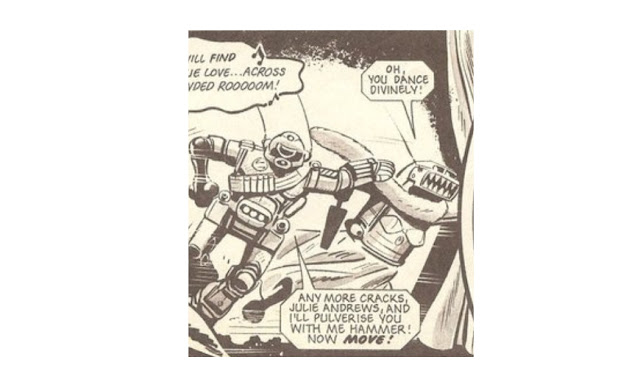 At last, the robots exit stage right and we can get on with the action. The rebellious robots are holding a secret meeting, and they murder a human when he blunders in on it. This is also played for laughs, with the robots talking about how much more difficult it is to twist the head off a human than a robot, which is somehow funnier than a robot in a skirt. Then, at last, Hammerstein gets hypnotized by one of the evil robots and sent into the kill frenzy we’re looking forward to, just before the end of the strip. 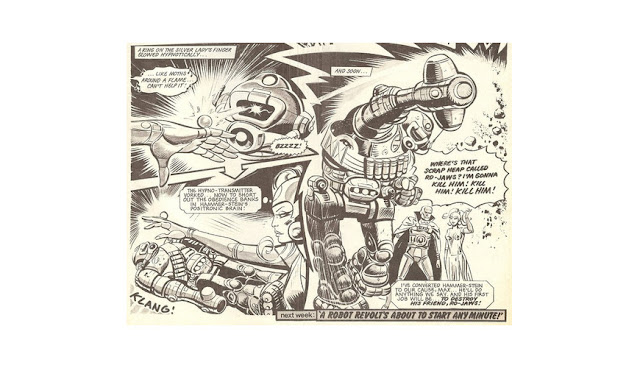 So that’s our cliff hanger. I guess we’ll have to wait until next week for the real action to begin. This was quite a disappointing episode, but the action should be good next issue. Now we have a hypnotized war robot, a gang of bloodthirsty robots intent on revolt, and a luxury hotel full of unsuspecting, rich guests. There has to be action next week. 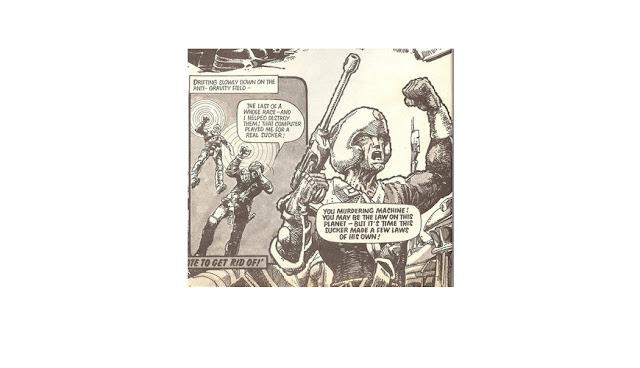 The next story is Strontium Dog, where the hero, Johnny Alpha, was ambushed at the end of last week’s strip, and now we get to see how he gets out of it. Not a lot of thought has gone into a clever twist because we just get a nice two page spread where Johnny and his side-kick Wulf simply fight their way out of the ambush. Unfortunately their fighting skills don’t stop them being used as pawns in an AI's plan to destroy an entire planetary population. In the last panel, our hero swears he will get his revenge. Strontium Dog is a good strip, with excellent art by Ezquerra, and there are also some nice sci-fi ideas here. For example, the AI, despite being quite comfortable murdering the inhabitants of its planet, must abide by some abstract rules: if 37 inhabitants are assembled, they can vote it out of power, and a mini-robot it smuggles among the remains of the planet’s civilization must give a “regulation” 60 second warning, before setting off its neutron bomb.

The story is as bloodthirsty and action packed as ever, with one unlucky character being dissolved in a lake of acid, and another character transformed into a hideous inhuman monster. The story ends with a satisfying cliffhanger, the monster in front of the group of survivors and the lake of acid behind.

As always, the last strip is the weakest, a feeble effort called TimeQuake that relies on even more unlikely coincidences than usual for a time travel story. At least, the long arc of stories about a Nazi invasion of time is over, so we may get something more entertaining next week. All in all a great issue, it’s just a shame that TimeQuake always leaves a bad taste in the mouth at the end of the comic.
Labels: Prog Slog Starlord