I write a lot about 2000 AD because it was a very formative experience for me. I have a 2000 AD page where I link to all the issues I have talked about on this site. And here we go again. I’m reading an absolutely ancient issue of that comic book. It’s lot of fun for me, because I get a giant hit of nostalgia from every issue I read through. So even when the comic book isn’t super great, like this one, it is still well worth my time. 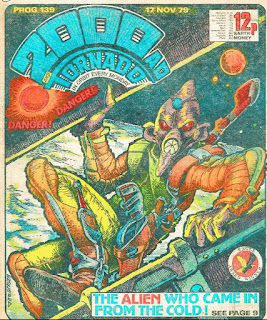 On the cover this issue has what looks like a rapid sketch of an alien climbing through an airlock. It’s effective and done by that talented artist Carlos Ezquerra, but.... it doesn’t have anything to do with any of the ongoing stories inside the comic book this week. Anyone who reads this blog regularly will know this is not my preference. I prefer a cover to show some action we are actually going to get inside the comic. Though I can see why they had trouble picking a story to feature. 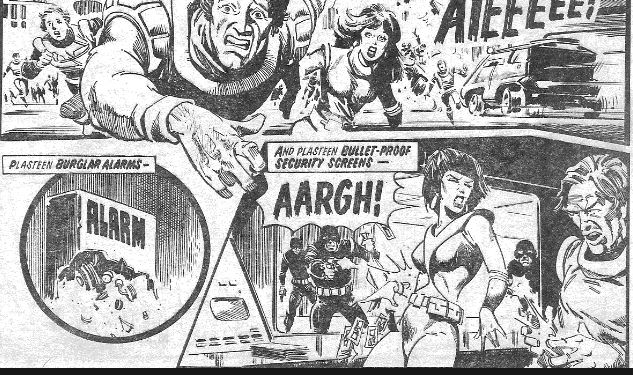 Judge Dredd is drawn by an artist called John Cooper this week. I’m slowly starting to realize that a lot more artists worked on 2000 AD than the limited pantheon of big names that I remember.
His influences seem to be Gibson and American superhero titles. A lot of the women drawn in the background in this strip are wearing swimming costumes and leotards and have the most common super power. Unfortunately 2000 AD from this period is often problematic.

The Chief Judge’s uniform he “designs” though is extremely lazy and slapdash. The best comic book artists of a sci-fi title like 2000 AD also have to be concept artists, designing the clothes, technology and architecture of the future as they go. John Copper completely drops the ball here on that responsibility here with this costume. 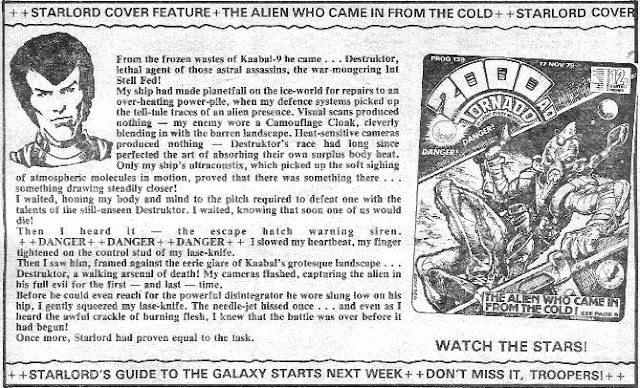 Next comes the story to accompany the illustration on the cover of the comic. It’s just a paragraph, but it is quite a poetic piece of flash fiction. It talks about the soft sighing of atmospheric molecules as they move, which is nice writing, and it mentions Starlord, gone but not forgotten. I can forgive a lot for just the slightest mention of the comic book hero that got me into reading sci-fi comics in the beginning. 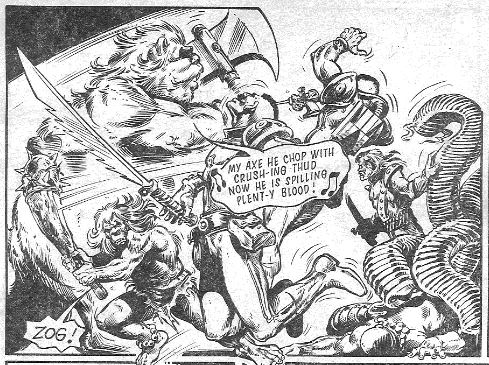 Black Hawk is the next strip, and I’m not a big fan of its constant, gladiatorial combats. In theory a gladiator in space is a good idea, but something about the story, or maybe the art, just doesn’t engage. 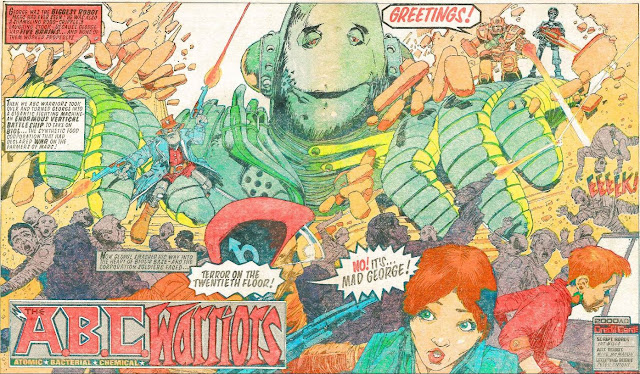 It is followed by a strip I much prefer, ABC Warriors. I really loved this strip when I first read it, many decades ago. It had an interesting premise where seven robots are sent to Mars to pacify a recently terraformed planet that has degenerated into civil war between militarized corporate conglomerates.Plus one of the robots, Deadlock, wears robes and can do magic. 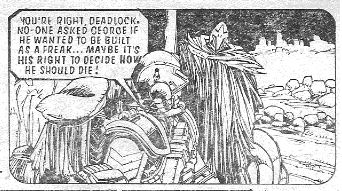 Obviously this is just a backdrop to some gnarly robot combat, but it gives a veneer of politics and world building to even the dumbest robot fighting, mayhem and action. In this issue we have a giant robot, one of my favorite stupid ideas of sci-fi. This giant robot is called George and was abandoned to wander the Martian wastes. The ABC Warriors have repurposed him as an assault vehicle, but he is badly designed, with seven brains, and has trouble controlling his movements. 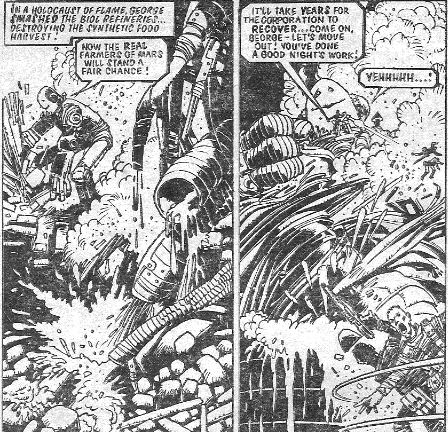 We see him destroying company property at one of the mega corporations running riot on Mars, leaving the weeping pipes and rubble behind that McMahon draws so well. McMahon draws good rubble. The Biol Corporation are soon looking for revenge and they send heavy tanks after the giant robot, who it seems is reconciled to his fate. George is just a busted old robot and he expects the tanks to male short work of him. 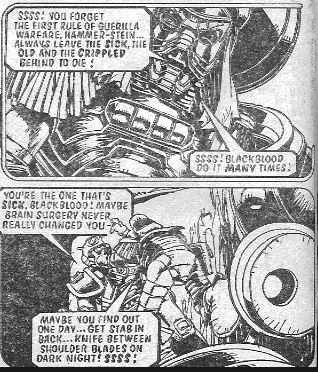 Of course the ABC Warriors are not cool with that, well most of them aren’t. The delightfully evil General Black Blood is fine with leaving George to his fate. After all, what can they do to save the giant robot from the tanks? They are forced to abandon him, and the tanks use him for target practice.

The ABC Warriors watch the explosions rising in the air from the other side of the hill, and see flying debris. But then they realize the debris doesn’t come from a giant robot, it comes from the tanks. It turns out the liquid ABC Warrior ended up flowing into George’s nervous system and uniting his brains. 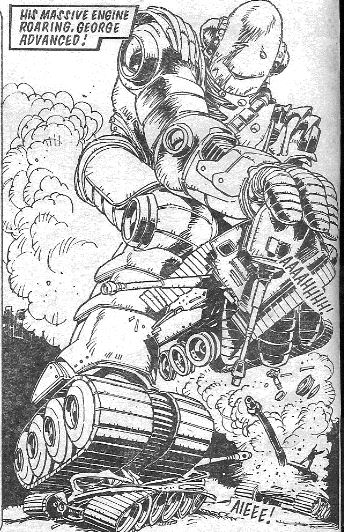 As always McMahon is gleeful in his depictions of chaos and destruction. It is only a single panel but George destroying the tank is beautiful. So, once again, the ABC Warriors is the only strip worth reading in the entire comic. 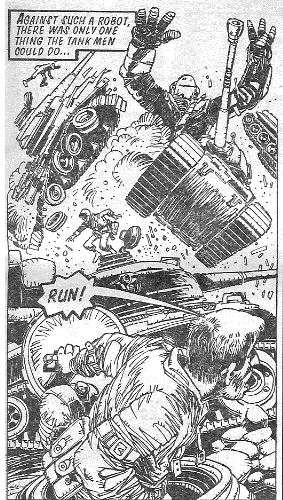