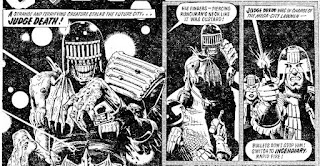 I write a lot about old back issues of a comic book called 2000 AD, because reading it was a very formative experience for me, and I still read it today. I have a 2000 AD page where I link to all the issues I have talked about on this site, and I've even written a book collecting the posts. I have to warn you that this issue is not great. It is full of both sexism and racism, but it introduces a character that would go on to be a huge part of 2000 AD in the future, so it is an important one. Problematic but important. 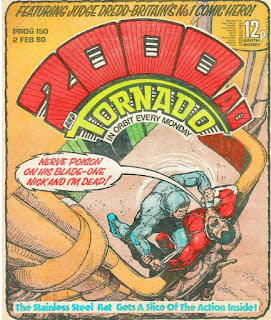 This issue has a nice cover by Carlos Ezquerra with some very dramatic perspective, though the guys fighting on a balcony do unfortunately look a little like they are wearing pajamas. Judge Dredd is the first strip this week, and it is episode two of the first ever Judge Death story. This was enormously popular at the time, and Judge Death would make several reappearances over the years. I just wish his outfit didn’t look so much like a Halloween costume. Anyway, the art is done by Bolland again, who produces quality work, if a little light on background detail.
The judges, led by Judge Dredd, tried shooting Judge Death last week, which didn’t work, so this episode they try burning him. It seems to end the creature’s life but its spirit gets away. Then this story introduces the second of its long-running characters. This was a character so popular that she would soon spin off into her own story, Judge Anderson of PSI Division. 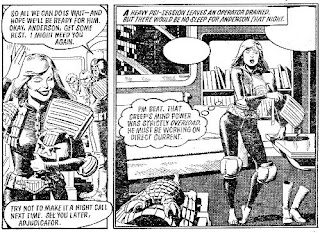 Anderson uses the creature’s remains to make contact with its escaped spirit. She uses this contact to give Dredd some tidbits of information, and then things take a turn for the cheesecake. Anderson is shown baring a shoulder and cocking a hip just a few panels after being introduced to the strip. Oh well, perhaps that explains some of the character’s popularity. 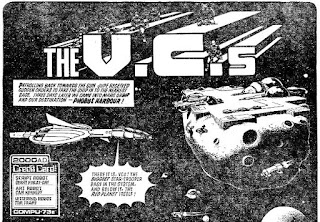 I rarely do more than skim through the next strip, the V.C s, except when Cam Kennedy is doing the art. Just look at the moon base he has created in the very first panel. It is the moon Phobos to be exact, though much changed in this future. Such cleverly imagined and well rendered visuals will draw me into almost any story, even one as lame brained, and often laced with problematic and racist language and art, as the V.C.s. This episode in particular has an appalling racist stereotype of an Asian soldier lurking in the background of one of the panels. I hate that the skills of such a talented artist are caught up in this rubbish. 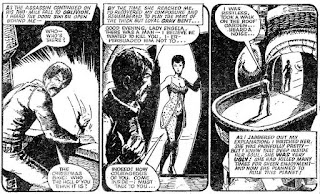 The writing is quite humorous in the next story, The Stainless Steel Rat. After flirting with this territory before, this episode sees the story go full cheesecake with the art. It’s embarrassing, and not worthy of Ezquerra, but it only lasts a couple of panels, and the character is dressed again, and ready for action. Slippery Jim De Griz and Angelina go off in a burrowing tank that is kind of cool. I like how it has long legs, like a frog, instead of having to be launched from a base unit. It turns out though that Angelina wasn’t fooled by Jim for a moment. She soon has a gun in him, and that is the cliff-hanger end of this week’s installment.

To end, just a reminder that the best way to support this blog is to buy one of my books. Simply go over to Amazon, or Kobo and get one.
Labels: 2000 AD