A couple of days ago I promised that this blog would no longer just be posts about sci-fi TV shows and old issues of 2000 AD. That, however does not mean that I am not allowed any posts about sci-fi TV shows or old issues of 2000 AD. Maybe I write what seems like a lot about 2000 AD, but reading it was a very formative experience for me, back in the 1970s and 1980s, and I have a 2000 AD page where I link to all the issues I have talked about on this site.

Issue 186 of 2000 AD came out 15 November, 1980, and cost the princely sum of 14 pence. That doesn’t sound a lot, but in today’s money that is almost a pound, based on the Bank of England inflation tracker. Actually that's not as much as I was expecting, well, never mind, on with the show. 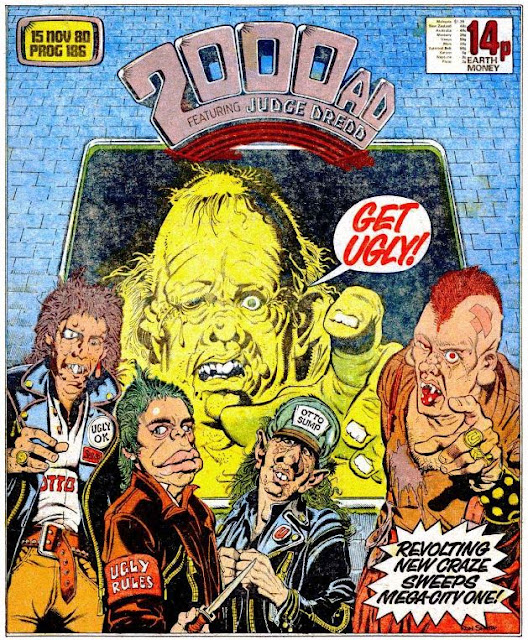 The cover features a character from the Judge Dredd strip called Otto Sump, and it is the work of Ron Smith. To my eyes this is another uninspiring cover, following on from last week’s substandard effort by the usually exceptional Carlos Ezquerra. It is static and, by definition, ugly. It doesn’t make we want to read the Judge Dredd story at all. In fact I find myself flipping past Strontium Dog, The Mean Arena, and Dash Decent, along with Judge Dredd, to get to my favorite story from this period of 2000 AD: a strip called Return to Armageddon.

If you don’t like me flipping forward like this, and you want a more disciplined approach to reading an ancient comic book from forty years ago, I have a site I can recommend. This issue is covered in some detail on the blog of another poor soul doing a prog slog. Sheridan Wilde calls his slog a back prog hack, and it is well worth a look. 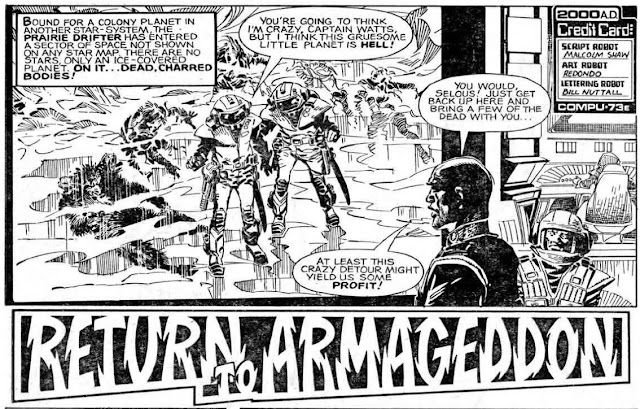 Like I said, I turned immediately to Return to Armageddon, and I did this because of last week’s spooky installment, I couldn’t wait to see what was locked in the planet’s ice and what was going to happen on the spaceship. It turns out there is a horned figure below the ice, and some charred humans. The crew of the lost spaceship free them from the ice using lasers, and bring them aboard.


The captain is pleased with their their find, but the passengers, a religious cult, are not. They especially don’t like the hairy one with horns, making it look like the devil. The ship’s doctor finds some live cells in the creature’s liver and decides to bring it back to life. He goes full gun-toting mad scientist when one of his team stands in his way. So far, this story is hugely entertaining, and I’m already looking forward to next week. 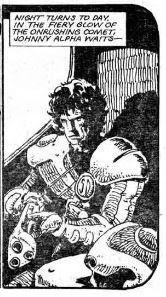 After reading Return to Armageddon I went back to Strontium Dog where The Schicklgruber Grab, with wonderful and detailed art by Ezquerra, is continuing. It starts with Johnny Alpha using a device called the time ejector. This immediately transports the heroes to a different point on the time continuum. It is a ludicrous idea, more like a magical item than a technological device. This installment is quite enjoyable, however, as long as you go along with its lighthearted tone. Johnny Alpha is not a lighthearted character, unfortunately, so he is forced to sit in a corner and brood while everyone else gets on with their comedy shenanigans.

Next comes The Mean Arena, which continues Tallon’s flashback to his last match in the US. It’s the typical grim and senseless action, with no attempt at such side issues as character, plot, or even consistency. I must admit that I enjoyed it. When Mean Arena has a good artist it represents all that is good, and bad, about the classic 2000 AD formula. This episode has art that is just, only just, good enough to allow the reader to catch a glimpse of what this strip is capable of.

Dash Decent is a one page attempt at some humor, which is something that never seems to quite work in the ultra-violent world of 2000 AD. It also distills some of the problems of this old comic book into just one panel, which includes a sexist representation of a damsel in distress and a racist depiction of an evil Asian emperor in the same image. 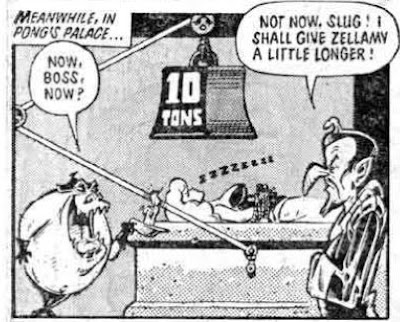 It is a colossal waste of the talents of Kevin O’Neil, whose work is its usual scratchy, feverish, detailed, and genius self. Problematic, very problematic... but beautiful. 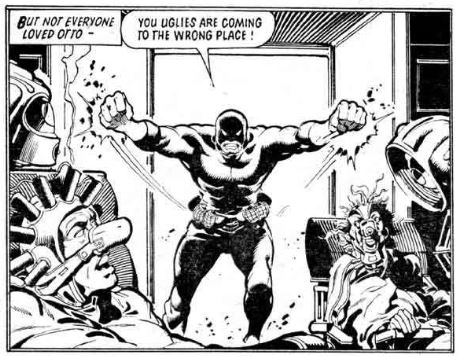 Judge Dredd this episode is about a fashionable society woman who intentionally goes to a plastic surgery clinic to be made uglier. It is pretty broad as a satire of fashion trends and plastic surgery, but it does suit Ron Smith’s drawing style. His fleshy, rotund style is perfect for the ugly results of the intentionally botched surgeries. He even gets a chance to draw some bad guys as muscular Marvel supervillains, which is something he loved to do. If only he could have injected some of the frenetic activity of this strip, which looks great, into the static and boring cover based on it.

Return to Armageddon is next, but we have talked about that so we can flip past it and move on. Even while flipping past this story, however, it is worth taking a little time to marvel at the beautiful art by Redondo. I love Redondo’s skillful draftsmanship and ability to capture complex technology and ideas in just a few brush and pen strokes.

Then comes Meltdown Man and it is, as usual, dumb and boring. It absolutely wastes the talents of Belardinelli, who is one of the greats. The strip looks good but makes no sense at all. The worst thing this episode is when we are told the mole men we meet will have an advantage in the dark against their opponents. Hilariously, all their opponents have lamps, so to gain the advantage of being in the dark the hero of the strip has to accurately shoot out every lamp. Then and only then can the mole men be sent in to chew them up. But... if the hero can shoot accurately enough to knock out their lamps, why didn’t he just shoot them all in the head. It’s preposterous, and a waste of everybody’s time.

All in all this was a very enjoyable issue of a classic comic book. It is problematic and never even comes close to threatening to pass the Bechdel test, which is something anyone thinking about reading it should be warned about, but I did enjoy this issue of this problematic fave of mine. To end, just a reminder that the best way to support this blog is to buy one of my books. Simply go over to Amazon, or Kobo and get one.