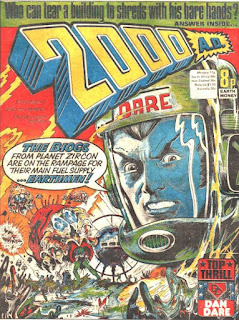 This issue has a bonkers cover, but I love it. Both the art and the words are super-over the top. In the background, which is a complex alien planetscape, an unlucky astronaut is being devoured by a gas-bag alien, while in the foreground Dan Dare's eyebrows might be the freakiest thing about the art. In an attempt to expand this craziness Dan is saying:

The Biogs from planet Zircon are on the rampage for their main fuel supply ... Earthmen!

The art is not objectively good, and neither is that dialogue, in fact it is so cheesy and bad that it has looped round and become good again. It's like a Platonic ideal of a crappy comic book cover, and it was published in the UK in the late 1977.

By the way, I write a lot about 2000 AD because it was a very formative experience for me, and I still read it today. I have a 2000 AD page where I link to all the issues I have talked about on this site. 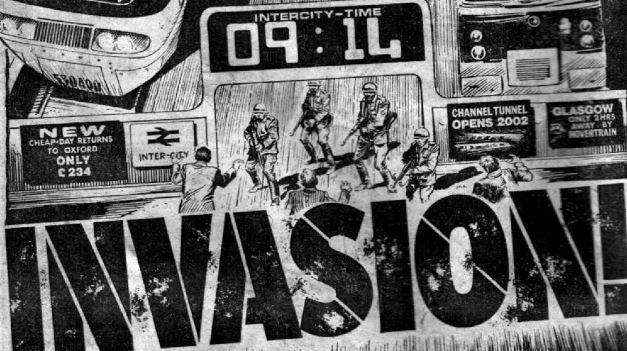 The first story this week is Invasion, a story for meat heads, and one that I am not a big fan of. There is an interesting gag at the edge of one fame that did catch my eye, however. There is an advert of a cheap day return rail ticket to Oxford, presumably from London, advertised at £234. This must have seemed hilariously inflated to the writing team of the time, because that is more like the last-minute ticket price on the day from Strasbourg to London, rather than Oxford, and it is still exaggerated enough to be funny, even today when many commuters pay £1000s for rail, tube or metro tickets each year. The story also predicts a Channel Tunnel opening in 2002, which is unusually pessimistic for sci-fi writing when, in fact, tunneling actually commenced in 1988, and the tunnel began operating in 1994. 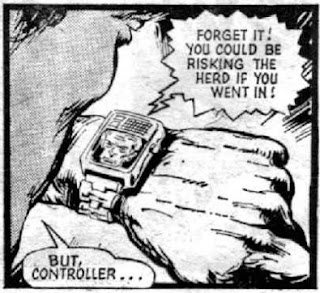 Next up comes Flesh, which is a cowboy story, but with dinosaurs and sci-fi technology. This is pleasantly retro technology we are talking about, of course. There is a lovely drawing of a wrist communicator, for example, where half of the face is taken up by a speaker. It is amusing to see how the artist failed to anticipate miniaturization making speakers ever more tiny.

There is also a nice drawing of a time ranger standing on top of a dinosaur skull. I would have happily had a bigger drawing of this beautiful scene. The story uses the old trope of jamming the dinosaur's jaws open with a length of wood. It doesn't work, and the cowpoke looks to be in deep trouble, but then smoke from a nearby town that is on fire blinds the dinosaur and he escapes.

Then follows an intriguing few panels that seem to he designed to show Old One Eye going mad with frustration at not being able to kill this hated human. She becomes a man-eater in her rage and pain. She then kills an alamosaurus and a cowboy on a jet bike before picking her teeth with her tiny foreclaws. That actually seems a compelling use for the puny front limbs of a tyrannosaurs to me, so much so I did some research to see if this guess from a 1970s comic book is anywhere near on the money. Experts say, it is not.

In the case of most Tyrannosaurs, their forelimbs were too small to reach their mouths so the could not have used their claws as tooth picks.  The truth is that T.rex probably did not have to clean its teeth, like most reptiles they have a considerable advantage over the mammals when it comes to dentition.  Dinosaurs constantly shed their teeth, with new ones growing up from the jawbone to replace old, damaged or wore teeth.  This is why when you look at a skull of a T.rex in a museum all the teeth in the jaw are different sizes. The teeth of a T.rex were shaped slightly differently depending on which part of the mouth they come from but the different sizes are due to some teeth being older than others, smaller younger teeth erupting through the jaw. 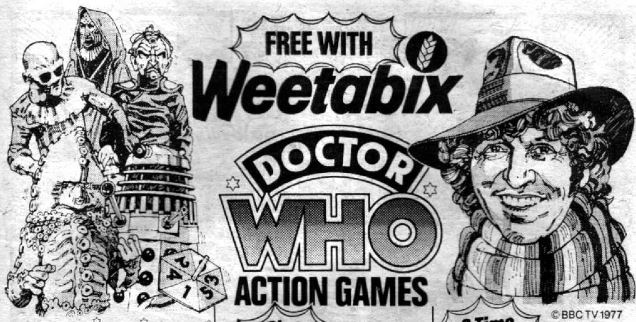 Next there is an advertisement for a breakfast cereal bar, very heavily featuring a Doctor Who themed free gift. I got an instant jolt of recognition when I saw the advert, and I'm pretty sure I pestered my mom into getting a pack or two with this promotion when I was a kid. I can almost feel the card of the stand-up collectible playing pieces between my fingers and the art definitely looks familiar.

The next story is Harlem Heroes, and they are fighting the Ruskies. The Russians are drawn here as steppes warriors. They all also seem to be called Boris, and the aeroball game looks a lot like a brawl.
The rules of this future game are always evolving as the comic book goes on, and this issue we see that players who touch the goal basket thing get electrocuted. We see one of the Russian Boris's get electrocuted so bad he is taken off to hospital. Considering the last character we saw in hospital is a brain in a jar, there is no telling how bad his injuries are. 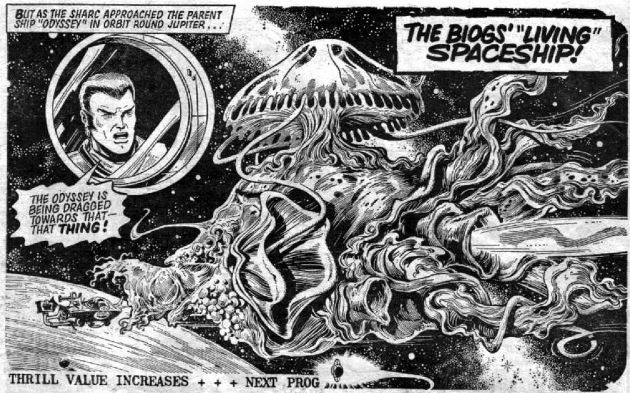 Dan Dare is next and, visually, it sometimes degenerates into a bit of a mess. This is always a fanger with stories featuring "organic" technology. It is hard, sometimes, to "read" all the organic shapes of the monsters Dan is fighting on the surface of Jupiter. Despite the confusing art, one thing is never in doubt, that Dan and his brave gang will escape the planet. Unfortunately, as soon as they reach orbit they are met by a giant spaceship that was grown rather than built. It is a mountain of biotechnology that looks like a bunch of octopuses and jellyfish all stacked on top of each other. 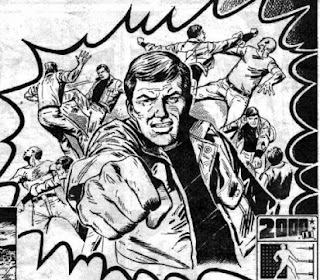 The next story is MACH 1, which is usually a real throwback to 70s hard man stories, such as The Professionals. This issue MACH 1 is tasked with rescuing an arms manufacturer, stranded in South America after a coup. I can't imagine a similar story being told in a comic book today. Probe, for that is our superspy's name, MACH 1 is just his code name, soon reaches his target, who is revealed to be an entertainingly obese stereotype in a pinstripe suit. 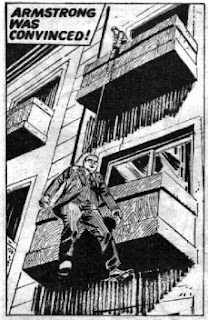 The fat buffoon initially doesn't want to be rescued because it seems like an escape across a civil war might be dangerous. That seems like a reasonable objection, but MACH 1 dangles him out of a window until he changes his mind. Just as Probe, and the fat businessman, look to be clear Probe finds out that a young boy who helped him has been picked up by the secret police. He ignores his chubby target's objections and goes back to help. 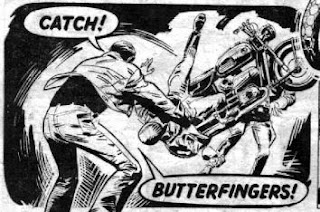 One of the improvised weapons he uses is a BMW R69. He requires 10% of his "hyper power" to pick up the bike... and rider. The strip ends with Probe tied between columns like Hercules using his super strength to cause an earthquake. This is weird enough but the last panel shows MACH 1 tossing an enemy combatant out of a helicopter, and it is played for laughs in a kids comic. Reading this strip again, it feels like the sort of thing intended to get the British youth of the time ready to fight in foreign and colonial theaters of war, where they would he expected to cheerfully join in with breaking the Geneva Convention and commuting war crimes. It is a truly mind boggling story to be reading in a day and time when, hopefully, we have moved on from the UK and its boys being expected to be part of a barbarous, colonial power. 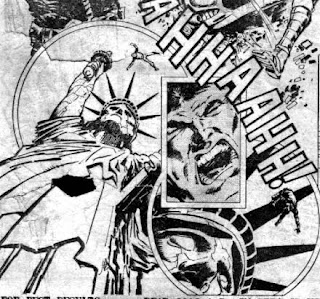 The next story is Judge Dredd, and though it is intended to be dystopian, with its gangs of street crazies and fascist police, it certainly didn't disturb me as thoroughly as reading MACH 1 just did. Entertainingly, to ram its message home, Dredd assassinates one of the citizens of Mega City One, and they end up impaled on one of the spikes atop the statue of liberty. Subtle. 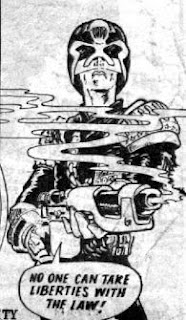 This was a very disturbing and bloodthirsty issue of the comic book, but I kind of like that. This is a comic book of its time, and a window into a period when boys were expected, very much, to be bloodthirsty monsters. Well known is the Jesuits' adage: "Give me a child of seven, and I will show you the man." But I think it is possible to take all this reprehensible stuff in, and still turn out okay. I would hate to see a comic book like this being made today, but I get a very real guilty pleasure from reading it now. I would not recommend it to anyone, but... I'm going to quit making excuses for it now. I'm not sure it deserves them.

To end, just a reminder that the best way to support this blog is to buy one of my books. Simply go over to Amazon, or Kobo and buy one.
Labels: 2000 AD British Comic Book Prog Slog