Here I am again, on a nostalgia trip, reading an old issue of 2000 AD from the late 1970s. This isn't the first time, and I have a 2000 AD page where I link to all the issues I have talked about in previous posts. As I read through these old comics I have been complaining about the series of covers that has been gracing them. They have been uniformly bad, but this one is an exception, it’s actually quite good, not great, but quite good. I'm always a sucker for stories and art depicting humans taking on robots in hand-to-hand combat. There is a long tradition of this kind of idiocy in science-fiction, seen in its purest form in Magnus, Robot Fighter, which I wholeheartedly recommend. Reading it is enjoyable in the same that watching a 50s sci-fi B movie is enjoyable. You can read my thoughts about Magnus, Robot Fighter here in a previous post. 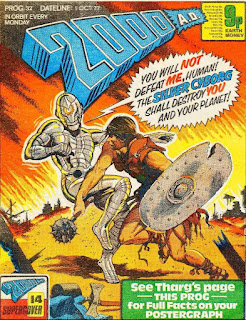 So this cover, which shows an Ultron influenced robot taking on a Conan influenced warrior, is intriguing. Both Ultron and Conan appeared in popular Marvel comic books in the 1970s (Ultron was a nemesis of the Avengers superhero group and Conan is a character from a series of fantasy stories licensed to Marvel) and it is a little cheeky of 2000 AD to use them. The art is justified with a short story hidden away somewhere inside the comic book, usually microfiction of just a few paragraphs in length. This month the story is an entire column, but it has the usual problem of having to be a little generic because there just isn't enough space to do anything too imaginative. This is one of the best cover and short story combinations yet, but the cover would still be far better dedicated to one of the actual comic strips inside, which are all much richer and more imaginative than any one-off story could ever be. 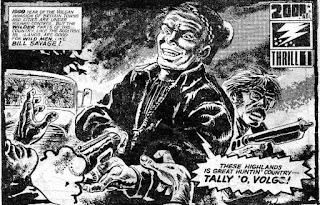 Opening the comic book up, the first story presented this issue is Invasion, which has art this week that verges on caricature. The art completely subverts the brave resistance hero at the heart of the story, a man named Bill Savage, the leader of an insurrection against an invasion of the UK by a totalitarian Eastern state named Volgania, i.e. a thinly veiled stand in for the Russians that everyone at the time assumed would he coming across Central Europe in a blitzkrieg maneuver sooner rather than later. Instead of making Bill look square jawed and heroic, he is presented as a psychotic weasel.

This issue, the story revolves around the arrival of Colonel Volgaska, to help the local units of the Volgan military in their unsuccessful attempts to capture 'wild man' Bill Savage. Word of the arrival of a new, ruthless commander reaches the resistance and, with his typical gung-ho attitude, Savage decides to infiltrate the local Volgan HQ and assassinate the new colonel.

The shenanigans that follow revolve around Savage, and his henchman Silk, assuming the new commander is a man, but she turns out to be a woman. This allows her to pretend to be an old cleaner, and get the drop on Savage. She stabs him with a blade soaked in paralyzing poison and at the cliffhanger end to the episode she tells Savage that she has many tortures ready for him. It is a ridiculously sexist story line, and this combined with the gargoyle like faces of the characters and grim Scottish landscape make for a grand guignol experience.

The second strip this week is Judge Dredd, in another classic story that I am sure I have seen somewhere else, in an annual, or a collection, or somewhere. The art is by McMahon, in his scratchy, loose, inspired, early style and the story is about a robot hotel gone badly wrong. A great premise for a Dredd story.

As you probably guessed, by page two the hotel is already gassing, boiling, and drowning the people staying there. In an unusual show of agency for a female character in a 2000 AD story of this period, a woman who is a guest at the murderous hotel manages to get out to warn Dredd, after her husband sacrifices himself to short circuit their room door and give her an escape route. It would be great if women doing heroic things was more common in these old comic books, but the stories very rarely even pass the Bechdel test. 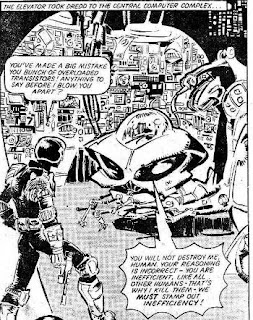 Dredd enters the murderous hotel through the kitchen and immediately has to start dodging the building's attempts to kill him. Dredd then saves the day by blasting the computer until its mind slowly dies, in a scene similar to the gradual loss of consciousness suffered by Hal in 2001.

Shako is the next story presented, and it is as ridiculously violent as usual. This time the kill-crazy polar bear who is the star of the strip manages to actually shoot one of his victims, to make a change from biting and clawing them. It’s a stupid idea, but it made me smile. 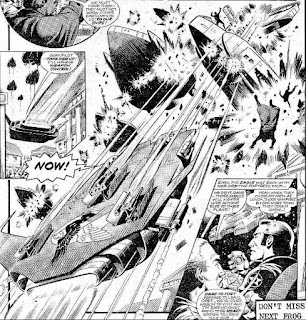 Dan Dare is next, and he is facing space vampires, which sounds like fun but is honestly a bit of a slog. The art is static and there are a lot of words in what is, essentially, an extended fight sequence. I’m always struck by how much potential Dan Dare has as a character and how rarely it is realized, and this installment is no exception.

Next comes Mach 1, now with added aliens, and it's great. Three episodes in, the story is in full swing, with a fleet of alien craft torching a backwoods town with heat rays and remotely animating (or possessing, it isn't clear which) some of the inhabitants. It is great stuff, and I can't wait to see his this story line turns out.

The issue rounds out with a stand alone story about time travelers enjoying disasters through history, starting with Pompeii and heading on to the Salem witch hunt next week. I'm interested to see where it is going with that idea, though i can imagine it isn't going to go well for the time travelers.

If only the editorial team weren't still doing this weird thing with the front cover, this would be another almost perfect example of an early issue of this classic sci-fi comic book. The late 1970s are a fascinating period in the development of 2000 AD. It is still evolving away from its roots in the war, western, and action conics of the time, but is already something recognizably different. There is already a taste of the 2000 AD it will eventually become, and it would be all the better with a cover that featured Dredd or Dan Dare, rather than a pale imitation of Ultron.