There is an idea that keeps coming up in science fiction comic books that is supremely goofy and illogical, and therefore appeals to me very much. It is the idea of a human fighting robots with just their bare hands. Obviously, the idea of a flesh and blood human being able to fight a metal robot is ludicrous in the extreme, but it does keep on coming up. I just today discovered bare-knuckle robot fighting in its purest, and maybe earliest, form. 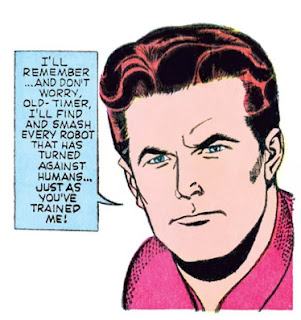 I was at a loose end and looking through a database of old comic books when I came across an early example of... I hesitate to call robot fighting a genre... so let's call it a theme. The comic I found is called Magnus, Robot Fighter 4000 A.D. Magnus was intended as a kind of 4000 A.D. Tarzan, come to save humanity from their dependence on robots and technology. The story was created by Russ Manning in 1963, and the series was popular in the 1960s, with sales only declining as the 70s approached. 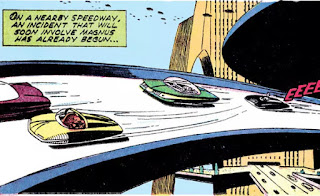 The story is set in a huge city called North Am, a megalopolis that encompasses the entire North American continent. The city consists of several levels and isn't too dissimilar from the city called Mega-City One invented for the Judge Dredd strip in the British comic book 2000 AD. I'm a big fan of early 2000 AD, by the way, as regular readers of this blog will know. I write a lot about 2000 AD and I have a 2000 AD page where I link to all the issues I have talked about on this site. I can't help thinking that the writers of Judge Dredd had read a little Magnus and that some of the DNA of North Am can be found in Mega-City One. 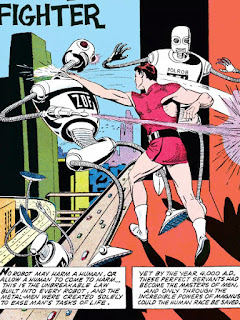 The first page of the story gives us a hint of the action we can expect in the comic to come, which is something I always love. We see Magnus doing what he does best, fighting robots. He is a muscular man wearing a pink skirt and a muscle top (60s comic-book fashion is amazing), who is dodging a laser blast and karate chopping a robot in the neck. His eyes are already on the next robot, working out how to quickly take it down. 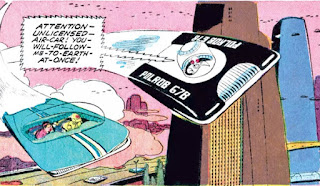 The comic proper starts over the page, and we go back a little in time to see Magnus arriving in the city. We see him flying over the city in an air-car with a mysterious golden robot with the name A1 printed on him. He is telling Magnus that only his steel smashing strength and his wits can save humanity. The golden robot is an old timer, and as well as training Magnus to fight, he has also trained him to find evil robots. Where his strength comes from is not explained in much detail, except that it is a perfect form of training. It is not hugely convincing, and a modern reader might prefer to come up with all kinds of head-canon scenarios relating to nanites or cyborging that an author of the time might not have thought of. Though Magnus does have a device called a robot receptor implanted in his skull, so maybe cyborging isn't so impossible for writers of the time to imagine after all. 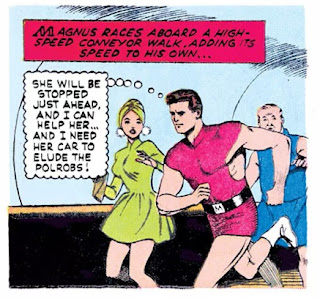 With huge air-cars based on late 1950s and early 1960s designs, a huge modernist city with raised freeways, and old-school robots, Magnus is a feast for the eyes. Almost every panel is like a talented and imaginative architect's concept sketch. The fashion is also amazing. The 50s future outfits that the ladies wear might have been copied from fashion magazines of the time. In one panel, a woman in the background is wearing a turban hat. Versions of this kind of turban came back into fashion from the mid 1950s, and were still probably being worn around the time the first issues of Magnus were published. This is all retrofuturist in the best sense of the word. 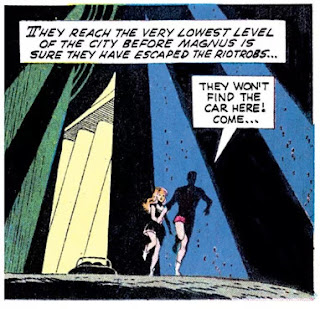 Magnus Robot Fighter is a high concept story that immediately grabs the imagination in a way a more complex tale might not. Things move fast in this comic book. In just a few pages the evil influence on the robots of this sector of North Am is revealed to be directed by the robot police chief. We are then introduced to a woman named Leeja in a combination of hair and outfit that reminds me of Barbarella. Even so, Magnus, Robot Fighter still has more of a 50s vibe than the swinging 60s stylings of the Barbarella movie. In many ways, Magnus, Robot Fighter is conservative and backward-looking even though it is about the future, even to its looks. Magnus and Leeja escape to the under levels of the city, and there is a beautiful panel, reminiscent of the look of Metropolis, with very atmospheric and stark lighting effects playing over large, featureless slabs. The panel is like a picture of a Film-noir movie set.

The attitudes on display in the comic book are a strange mixture of ever so slightly progressive, and unexamined 1950s patriarchy. Magnus calls Leeja a girl one moment, disparagingly and unthinkingly, then he thanks her for her help the next. He realizes he couldn’t have prevailed without her and he gives her her due. The strip is obviously sexist, in a strange, paternal, 1950s way, though there are glimmers of a more modern attitude to women, or maybe I’m just imagining that. The comic is also exclusively white, without a single person of color in the entire first issue. 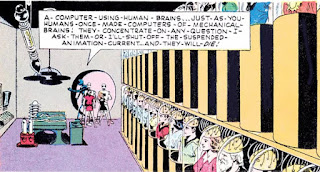 The story wraps up nicely by the end of the first issue, with the bad guy defeated and hints of a wider conspiracy discovered. Interestingly, and in keeping with the paranoia of the times, a radiation accident is what warped the mind of the evil chief of police. He keeps rebel humans that rise up against his tyranny in a contraption that wires their brains together and allows him to use them like a giant computer, like in The Matrix. Magnus battles the evil robot in front of this giant device for panel after panel, page after page. It is a very enjoyable, old-fashioned slugfest, with plenty of blows landed from both sides. It sums up this strange comic book nicely, and though it is flawed, it is an enjoyable read.