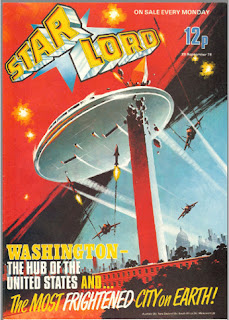 I am currently going back in time to look again at an old comic book from my childhood, a comic called Starlord. This is issue number 20, which came out 23rd September 1978, and even after twenty issues I’m enjoying reading these old comics again. By the way, you can read this vintage comic book too, because scans of the entire run of the comic are available at Starlordcomic.com. 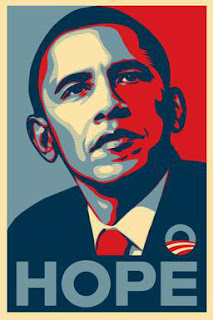 This issue has what I think is one of the best images to grace the cover during the comic’s entire run. It shows the Washington Monument being hit by a flying saucer, and the image is by some coincidence painted in the same colors as the iconic Obama, Hope Poster. Unfortunately the cover is a scene from what has to be the weakest strip in the comic book, a strip called Holocaust. Holocaust isn’t the first story in the comic, however, that is Mind Wars. 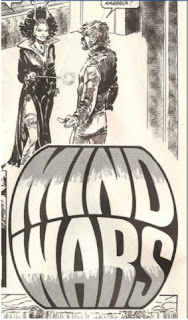 This issue sees the introduction of a new adversary, a vamp called Kareela. She’s a wonderful villain with some kind of laser wand and a modernist mansion, that looks like it could have been designed by Frank Lloyd Wright, hidden behind a waterfall. 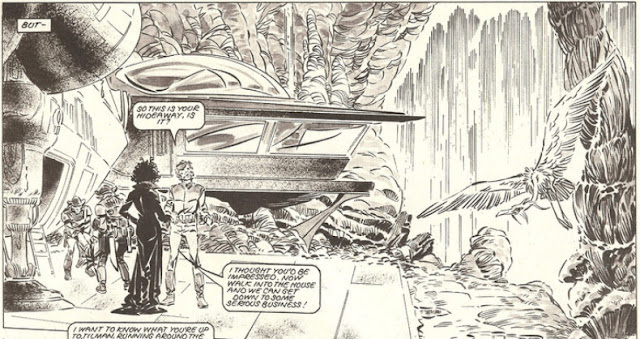 Tilman, one of the two the main characters, calls her the most ruthless person in the galaxy. It’s an excellent episode of the always dependable Mind Wars, and Redondo gets a chance to show off his ability to sketch impressive spaceships with just a few lines and ink washes. Mind Wars is pure pulp, but the influence of Star Wars and the art of Redondo elevates it to something greater. 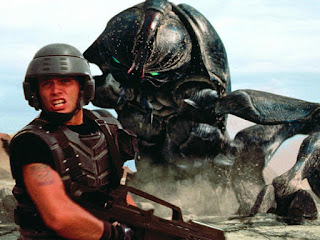 Next we get a one-shot story called Skirmish, that looks at first glance like Starship Troopers, the 1997 American military science-fiction action comedy directed by Paul Verhoeven. The Canon has a great podcast episode about Starship Troopers. The movie is about a young soldier named Johnny Rico and his exploits in the Mobile Infantry, a futuristic military unit. Rico's military career progresses from recruit to non-commissioned officer and finally to officer against the backdrop of an interstellar war between mankind and an insectoid species known as "Arachnids". The story in this strip is very similar, with a young soldier being inducted into the military, and then learning about the war. 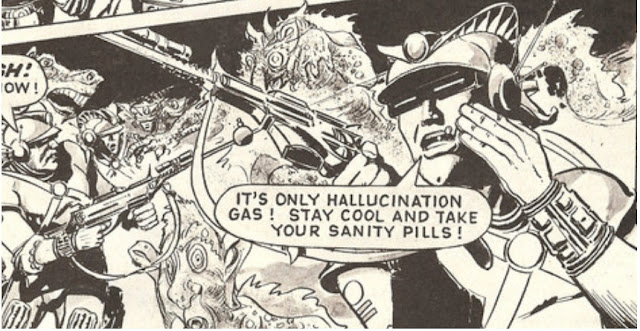 Towards the end there is an amusing panel where a soldier starts seeing monsters under the effects of a hallucinogenic gas, and so he pops some “sanity pills” to get back to reality. The strip is well drawn, by Pino, and it’s funny. The twist is that the war has been turned into a game and nobody gets hurt for real, like in professional wrestling. It’s quite effective, and definitely one of the better of these one-shot stories Starlord occasionally runs.


Back in 1978, the Christmas annual market was big, and we get an advert here for an annual featuring Dan Dare, even though Christmas is still months away. The annual looks good, with a cover by Kevin O’Neil. I might have to track it down one day and read it. 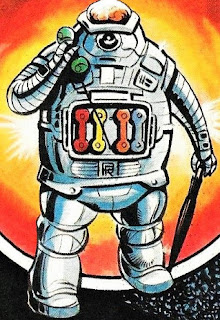 The next story up is Ro-Busters, which is about a squad of expendable secondhand robots that are sent into disasters thought too dangerous for humans. In this episode we get the fun twist that the squad is facing a financial disaster, rather than the usual earthquake, towering inferno, or leak of hallucinogenic crazy gas. This financial disaster is brought on by a small group of tax assessors. They are wearing bowler hats, which have now very much been consigned to history. The hat was designed in 1849 as robust headgear for the working class. It later became the badge of the Establishment, worn by solicitors and bank managers, and by the late 1970s had become a symbol of dull conformity in the face of more exciting, new, bare-headed fashion trends. The semiotics of the bowler hat were common currency in the Britain of the late 70s, making this a little touch that makes this strip quite dated. 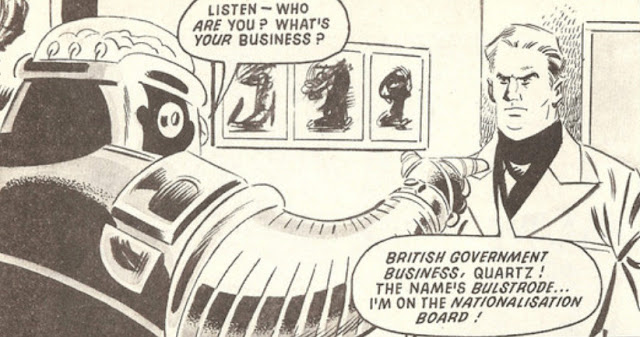 Wearing their bowler hats, the tax men confront the cyborg businessman who runs Ro-Busters, Howard Quartz, aka Mr Ten Percent. With bowler hats and a cyborg with a row of phones along his chest, Ro-Busters is a very 1970s conception of the future. It turns out, as the story unfolds, that if Quartz can’t pay his tax bill, his company might be nationalized. Of course, no businessman ever wants their company to be nationalized.

Nationalized industries were a big issue in the late 1970s. Most of the UK's major strategic heavy industries and public utilities had long been nationalized at that point, to ensure economic survival during WWII, and to aid post-war reconstruction. The news was full of talk of the state of these nationalized industries and there there was a lot of talk of privatizing them again. This is another touch that dates the strip very specifically back to the late 70s, and a nice jolt of nostalgia for me. Interestingly it is only now, forty years later, that nationalization is being taken seriously again. The Royal Mail, for example, is the most popular candidate for re-nationalization. Approaching two thirds of the UK public want to see the service run by the state, even though the organization only recently entered private hands (between 2013 and 2015) after 499 years of public ownership. 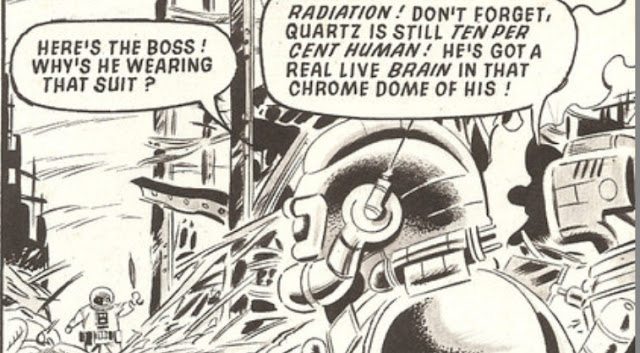 Just as the tax people are accusing him of incompetence and threatening to nationalize his company, the nuclear reactor he uses to power his island base blows up. At the very end of the strip, on top of everything else that has happened, Quartz gets kidnapped, and there is a cliffhanger as he recognizes who his abductor is. I can’t wait to find out who it turns out to be. 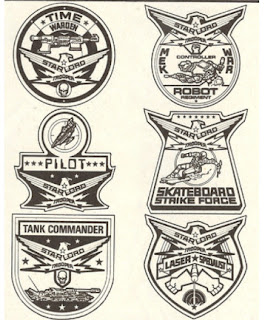 The editorial pages of this comic claim that the editor is a warrior named Starlord, and the stories are supposes to be like training videos, preparing the readers to join Starlord’s army and defend Earth. On the next page we see the badges of the various divisions within Starlord’s imaginary forces. My favorite is the badge for the Skateboard Strike Force. Even the idea of skateboard troops is so dumb, but also so 70s and cool. These badges should be on T-shirts, and I would create them myself on Society 6 or some such platform, if I wasn’t such a stickler for obeying copyright. It’s been a great issue of Starlord this week, but there is always one strip that doesn’t quite work. At the moment it is the strip called Holocaust, a story that is both ugly and inept. It is the reason for that beautiful cover though, so maybe I can even forgive even this substandard strip, at least for one week.
Labels: British Comic Book Prog Slog Starlord