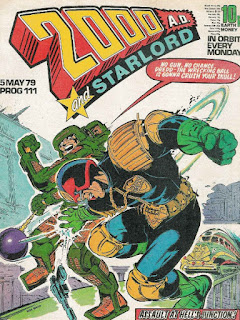 I am reading comic books of yesteryear at the moment, specifically back issues of 2000 AD. I've been at this a while, and I have a 2000 AD page where I link to all the issues I have talked about on this site. This one is from May 1979 and is issue 111. It is a very good issue, a classic even. First the cover, which is drawn by Ron Smith, has the comic book’s most popular character filling the frame, posed like an American superhero. I’m not a huge fan of Ron Smith, usually, but this art is just right for a comic book cover. Smith's Dredd is muscular, with a less prominent helmet and badge, compared to the lean lawman character with exaggerated uniform pads that other artists were drawing at the time. I mostly think this means Smith isn't as inspired and brave in his art but once you know where he's coming from, there is a lot to like. 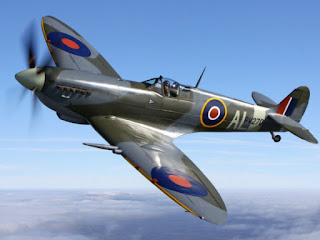 I just looked Ron Smith up on Wikipedia and am absolutely astounded at what I read. Apparently, Ronald George Smith was born way back in 1924 and flew Spitfires during the war. He started drawing comics in 1949, which makes him super old school. He was later sent to South Africa by a newspaper to help with a story on the anti-apartheid group Black Sash. 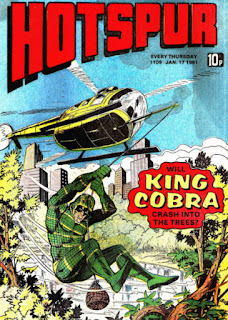 He pushed for superhero strips, and was eventually given the go-ahead to create King Cobra for Hotspur in 1976. It was in 1979, after an already long career, that he began drawing Judge Dredd for 2000 AD. This all explains why the cover looks like a superhero cover for Marvel or DC, featuring Superman or Batman. I must admit, Ron Smith is more interesting an artist than I had assumed. I’ll never look at his work quite the same way again, after reading about his exploits in WW II, his contributions to bringing down Apartheid, and his interest in American-style superheroes. 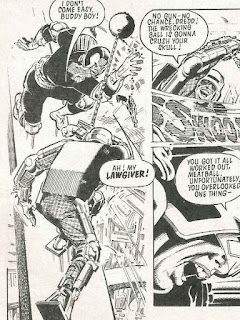 The first story inside the comic book is the Judge Dredd strip from the cover, and the whole thing is like an enjoyable superhero fight. Judge Dredd spends the episode jumping around the heights of the future city like Spider-Man.


The next story up is Robo-Hunter, which is exceedingly strange this week. Robo-Hunter is always strange but this episode is odder than most. It is a contemplative episode, showing the relationship between two men who have just killed every robot on an entire robot planet, but played for laughs, and one of the men is stuck in a baby’s body. I’m not a fan of Robo-Hunter, and this episode isn’t even a good one by its low standards. Even a classic issue of 2000 AD like this one can’t be all good, I guess. 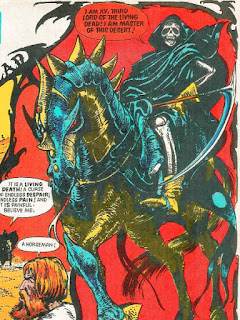 We get back on track with the next story, which is Strontium Dog, a kind of cowboy strip set in the future. It is usually a sci-fi western, that is, but this story arc is different, it sees Johnny Alpha and crew, the heroes of the strip, having to find a way to escape Hell itself. This is sci-fi, so Hell is actually an alternate dimension, but the creative team behind the story have gone to town on some gonzo mythology making for this alternate dimension. This is no simple version of Hell, and it is fascinating to explore it in the company of Johnny Alpha. 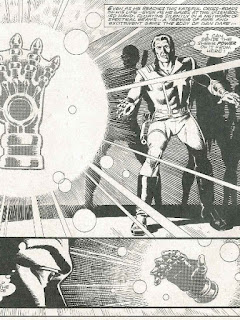 The next story up is Dan Dare, which is theoretically one of the oldest, least exciting strips in the comic book. Dare first appeared in the Eagle in 1950, in stories set in what was then “the far future” of the late 1990s. He started out as the British equivalent of Buck Rogers, but in an effort to update Dare this issue sees him given an artifact called Eternicus, a kind of gauntlet of power that projects energy blasts. It is pretty badass, and marks the point where Dan Dare moves away from being “the Pilot of the Future” and toward being a superhero. 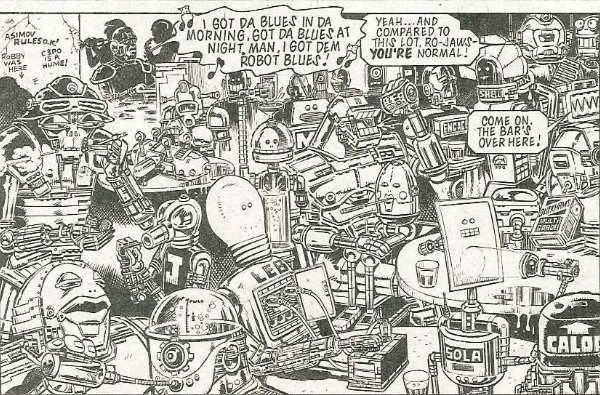 The last strip this issue, and the one that elevates this comic book from good to classic is Ro-Busters.  This episode of Ro-Busters is drawn by Kevin O’Neil and his always dense and complex art reaches insane levels of detail in almost every panel. The robots, for example, go to a nightclub where there is graffiti on the wall about how C-3P0 was a hume, and they are listening to Jazz sung by a robot called Led Belly, who is based on, Lead Belly. He was an American folk and blues musician who usually played a twelve-string guitar, but also played piano, as in this strip. He sang blues about liquor, prison life, and racism. He was written about as a heroic figure by the black novelist Richard Wright. 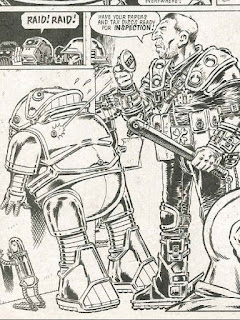 The atmosphere of relaxed menace of the robot jazz club is suddenly shattered by the arrival of the Robot Investigation Police. Kevin O’Neil is much more comfortable drawing robots than people, but he at least puts a lot of effort into these paramilitary thugs. They have the faces of gargoyles, stiff postures, and unconvincing anatomy. They are nowhere near as good as when drawn by Mike McMahon, the other main artist on this strip, but McMahon’s work never approaches the fun levels of crazy detail that work by Kevin O’Neil does. They both have their strengths, and O'Neil's are very much on display here. O’Neil designed both Ro-Jaws and Hammerstein, the two stars of this strip, and he has a lot of fun drawing them here, and seemingly hundreds of other robots.

Reading this strip, it occurred to me that there are very few female characters in it, or any other strip in this issue. I don’t think there is a single panel where two female characters are seen at the same time, and there aren’t any conversations between women. This all means that this issue of 2000 AD resoundingly fails the Bechdel Test, and it is hardly unique in this. I doubt very many of these vintage 2000 AD comic books I have been reading would pass the test, which does bother me, but not enough to stop me reading them. 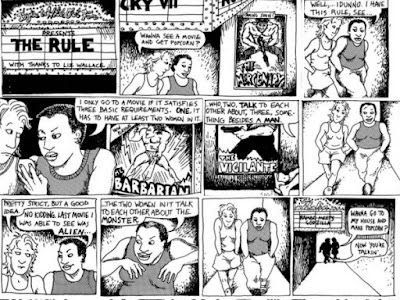 The Bechdel Test asks whether a work of fiction features at least two women who talk to each other about something other than a man. The test is used as an indicator for the active presence of women in films and other fiction, and to call attention to gender inequality in fiction. It is named after the American cartoonist Alison Bechdel, in whose comic strip, Dykes to Watch Out For, the test first appeared, in 1985. Bechdel credited the idea to a friend, Liz Wallace, and to the writings of Virginia Woolf.

As TVTropes.org says: There's nothing necessarily wrong with any film flunking the Bechdel Test. Indeed, there are films with female protagonists that fail it, such as the 2013 movie Gravity, a movie about a female astronaut attempting to survive a disaster in space.

Unfortunately, I don’t think that is what is going on in these old comic books. It never occurred to me at the time that these comic books should not be as uncompromisingly directed at boys as they were. I never imagined a girl might be interested in these themes. I never guessed that a young female comic book fan might even feel a sense of shame about comic book reading, might feel like something was not “right” with her for being a young girl that loved comic book superheroes. 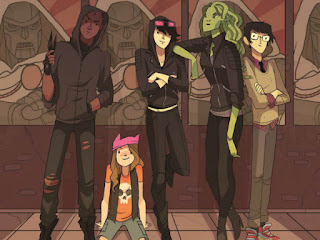 Now there are comic books like Runaways, about a group of teenagers who band together after finding out that their parents are part of an ancient evil conspiracy. It has a diverse cast of characters with girls who are superheroes, but also fully-rounded, human characters that aren’t just valued for their bodies or used only to further the plot of their male love interest.But back in the UK in the 1970s, comic books were gendered and divided into titles aimed at girls, and tiles aimed at boys.

Specifically, that meant war and sport comics for boys and horse and school comics for girls. Modern, progressive comics didn’t exist, which is infuriating. There is no reason why 2000 AD couldn’t have been more diverse. There was no reason it had to reflect the sexist, racist, and homophobic society that the writers and artists lived within by mostly excluding women, people of color, and LGBTQ characters from its stories.

2000 AD was not a perfect comic book back in those days, but this is a classic issue of what it was, for better or worse.I love it despite its faults - it's a problematic fave - and well worth a read.