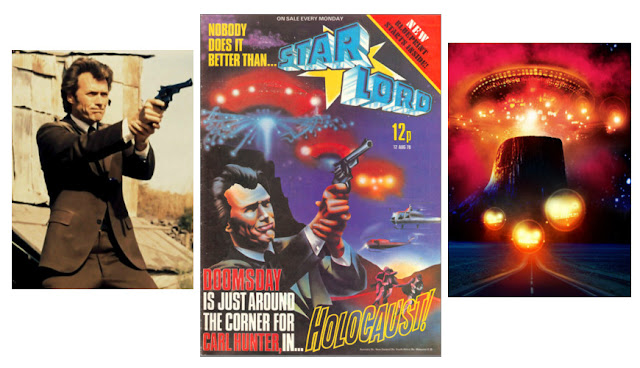 This post is the latest installment in my prog slog, which is where you read back issues of a comic book called 2000 AD. Often people start their prog slog with the first issue of 2000 AD, but that was not my experience of the comic. I’m starting my slog with the lesser-known and much more short-lived comic book called Starlord, which after a run of 22 comics was merged with 2000 AD at issue 86. I only started reading 2000 AD regularly when Starlord joined it, so it makes sense to me to start my slog with Starlord. Scans of all the issues of Starlord can be found on the Internet, so anyone can read them, even if you weren’t an obsessive comic book collector back in the late 70s.

Issue 14 of Starlord came out 12th of August 1978, a long time ago. Three Times A Lady, by the Commodores was a hit. It has the dubious distinction of being listed as one of the 150 greatest schlock songs of all time by Vulture.com. Oh, and I was nine years of age. At nine, a person’s attention span is getting longer and a nine year old can spend prolonged periods absorbed in activities that are of interest to him or her. Increased time spent reading is common, and they can start to express their thoughts and opinions with others on these. I guess, the things we read at this age make a special impression on us, which is why I’m dong this prog slog.

The cover of issue 14 of Starlord isn’t great, it’s an airbrushed work by the same artist as gave us Chrissie Hynd last time they were allowed hear a cover. This time we get a mash up of Dirty Harry (probably because The Enforcer had come out a couple of years prior to this) and Close Encounters of the Third Kind, which came out the year before.

Close Encounters of the Third Kind came out a few months after Star Wars, the movie that has left its stamp more deeply on Starlord. Michael Phillips of the Chicago Tribune says Star Wars was designed for easy, carefree consumption and Atari-style revisitability, while Close Encounters was different. It is a supremely optimistic alien visitation narrative told in a very old filmic language. It remains a sublime and brilliantly imaginative experience, a blend of childlike wonder and technological wizardry.

Dirty Harry, on the other hand, is a blunt, cynical, unorthodox detective, who set the style for a whole genre of "loose-cannon" cops. Close Encounters fits with Star Lord, but Dirty Harry very much does not. It’s an abominable cover from the point of view of artistic skill and sensibility, but it does say a lot about the combination of action and sci-fi to be found in popular culture of the time. It’s a great snapshot of the time when it was cack-handedly created, but it is still horrible. 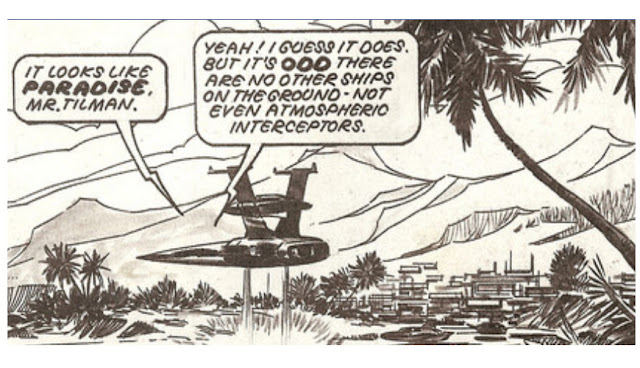 It’s probably best to ignore the cover, except for its nostalgia value, and flip the comic open to the first story, which is Mind Wars. This is an enormously blatant rip-off of Star Wars, but drawn by such a talented artist that it turns into its own unique thing. That artist is Jesus Redondo, who I just found out worked on some Star Trek comic books. This week Ardeni and Tilman find a planet to rest from their adventures, and it seems like paradise. 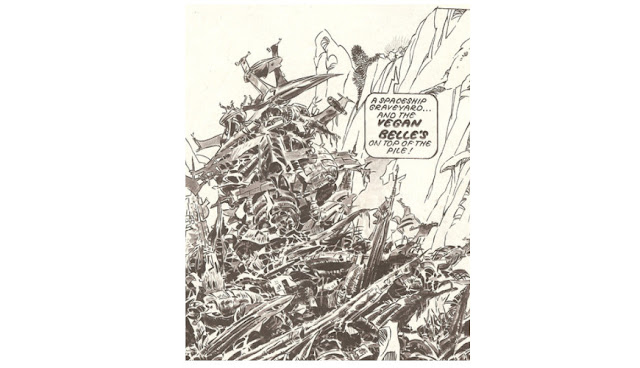 The planet turns out not to be as good as advertised, of course, and Tilman finds their spaceship tossed on top of a pile of other spaceships in a starship graveyard. Things get more interesting from there, and Mind Wars is its usual entertaining self. Next comes Ro-Busters, and there is a crazed pilot droid at the controls of an airliner to be dealt with. Ro-Jaws and Hammerstein are considered the two most expendable members of Ro-Busters, a team of second-hand disaster robots. They were bought cheep and are considered to be expendable, so they get parachuted in to save the day. 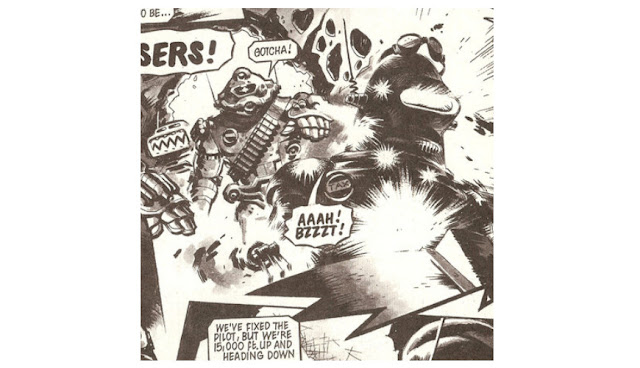 They deal with the crazy pilot robot by shooting it, which leaves the small problem of who is going to land the plane. It’s a classic Ro-Busters strip that is a lot of fun. There is even a nice gag at the end where Hammerstein gets painted in candy strikes as a publicity stunt, which he doesn’t like at all. 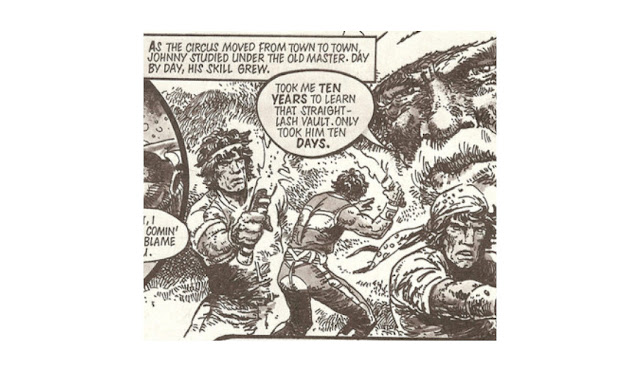 The next story is Strontium Dog, which is splendid pulp this week. The hero, Johnny Alpha, trains, movie-montage style, with the laser lash to defeat the bad guy: the same bad guy who lashed him almost to death last week. Johnny Alpha is a true comic book hero, of course, and does his entire fight training montage in just a single panel of the comic book. If only modern comics could sometimes compress their action like this, they might be a little more enjoyable. Johnny throws down the gauntlet and the bad guy returns, just in time for a cliffhanger telling us the real showdown will come next week. I’m actually really looking forward to that.

Next comes a new story, called Holocaust, and I remember that I didn’t bother reading it back when I was a kid buying this comic. As an adult, I decided to give it a try, and I have to say I should have saved myself the bother. It is aggressively bad, like it wants to hurt the readers brain. It’s a hard boiled PI story, with a gumshoe who looks like Clint Eastwood. There are a lot of text boxes, and they are all full of sparse Mickey Spillane-style detective fiction, which is probably why I didn’t read it when I was a kid. There is a lot of text, for relatively little pay-off in terns of action. Even the plotting is strange. It is supposed to be an alien invasion story with mysterious extraterrestrials, but the aliens were introduced, along with their motivation...and their plans, all in the first episode. I doubt I’ll be doing much more than skimming through this in future weeks.
Labels: British Comic Book Prog Slog Starlord