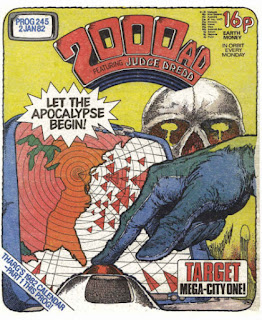 In this post, I am talking about a comic book that was released way back on the 2nd January, 1982. It is issue 245 of the grande dame of British comic books, a publication that goes by the name of 2000 AD. I loved it as a kid, and I’m rereading those great old issues I enjoyed then, through my cynical, grown up eyes.

This is an unusual issue which is stuffed with a lot of inconsequential filler, but there are still some good stories here, such as the start of a momentous and epic Judge Dredd story. It's a story about nuclear war, so the cover has a hand with its finger on the button, an image that is very on the nose. The artist is the great CarlosEzquerra who sadly passed away recently. I love his work, but this composition feels swift and lazy to me. A good cover is a difficult thing to pull off, I’m sure, especially in a weekly comic book like 2000 AD, which has to come up with the goods week in, week out.


At least 2000 AD don't follow a formula with their covers. Every cover is different, every cover is creative, but that means some of them – just by the law of averages – are going to be duds. This one, unfortunately is one of those. 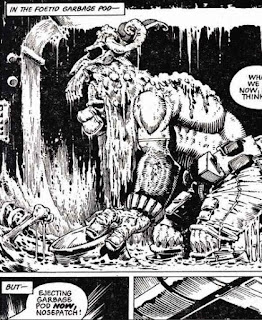 Inside, the first strip presented is the Ace Trucking Co. story, which I always have a lot of time for. It is humorous without being zany, and the art is whimsical, but still takes the sci-fi elements seriously. The way the characters speak, influenced by the CB craze of thetime, can be hard to take, but it is just a pleasant jolt of nostalgia to an old guy who was there at the time. It is a window back in time, just like the songConvoy, and the movie it inspired, that both also make a lot of use of CB jargon.


Ace and his crew are under attack from pirates, this issue, and their attempts at an improvised defense against the pirate boarding party are fun, in a Home Alone kind of a way. It doesn't turn out too well for them, and the only way left to hide from the pirates is to jump in a garbage chute, and reenact the famous trash compactor scene from StarWars. Belardinelli does a great job of drawing the liquefied goop in there, including an animal skull floating in the fetid mess. I'm usually more interested in the art than the story, but this week’s action is good work by Grant Grover. At the end, Ace thinks he can use the garbage container as a safe base from which to pick off the pirates, one by one. Sadly, he's proved wrong when the pirates simply jettison the entire garbage pod. It really is funny, and it is a lovely cliffhanger.

The next story is a groan-inducing Future Shock, where the twist in the tale is that Earth must be repopulated after disaster by a man named Adam and a woman named... wait for it... here comes the joke... not Eve, but Mavis. That is some pretty weak tea for the reveal at the end of the story. This travesty was written by Alan Moore, and is a waste of the artist's talents. Alan Moore is responsible for the following one-off story, too, and the writing is even worse. A whole bunch of old jokes are trotted out. A group of gods in funny clothes are mistaken for the current musical subculture, for example, but not beatniks or punks in this case, new romantics. That really dates this strip, almost as much as the phony CB language in Ace Trucking Co. The story drags on forever, until finally ending with a lame joke involving a Rubik's Cube. The art by John Cooper is effective, though, if a little generic.

After all this filler by Alan Moore, comes the cover story, Judge Dredd, and it is a doozy. It speaks to the paranoia of the time about Russian nuclear war and invasion of Europe, but transposes it to a future setting. Here a Russian mega city invades an American one. We see nukes fly, attack satellites drop from orbit, stealth bombers take out undersea forts with torpedoes, and it is all a lot like Red Storm Rising.

Ezquerra's strange, organic designs for the technology and war machines are fascinating, and we have only seen a small range of them by the end of this issue’s installment. There are even more of these weird and wonderful designs to come in later installments of this epic. At the end of this first episode, despite all the destruction, one character says.

> Unless they know something we don't.

This story looks great, the stakes couldn't be higher, with Mega City One already being hit by nukes, and the cliff hanger promises that their is more to come. 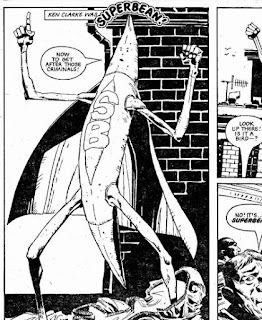 After this great strip comes the third story in one issue that is pure, stupid, filler. This one is called Superbean, and is written by apparently a robot, called Quirquix IV, which just means the writer didn’t want to put their name on it. If I had to guess, this is another lame, humorless turd, squeezed out by the talent-free hack named Alan Moore. By the way, this is not a popular position, but I’m not a fan. I think the guy is a sexist old nincompoop. Whoever wrote Superbean, it is a criminal waste of the art of McMahon. I just don't understand what was going on here. Even filler doesn't have to he as bad as this. McMahon’s art is gorgeous, as usual, but it is hard to enthuse about it when it is in the service of a story as pointless as this one. I remember this issue from the first time I read it, back in 1982, and I remember how bitterly disappointed I was with Superbean. I was already a big fan of McMahon, and I hated to see his beautiful art wasted on an extended Superman pastiche, and not a good one.