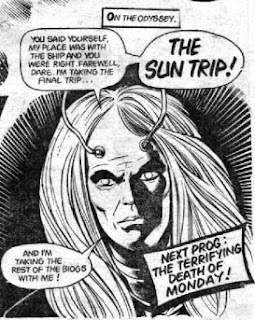 I'm currently reading ancient issues of 2000 AD page, and few are more ancient than issue 10. It came out way back on 30 April 1977. Back then the cutting edge of personal computing technology was the Commodore PET, and The Red Army Faction was carrying out political assassinations in a still divided Germany. Way back then, you could actually go see Led Zeppelin live, on their North American Tour, where they set a new world record for attendance at the Pontiac Silverdome. 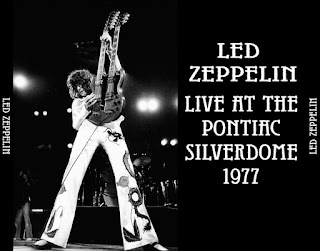 In the UK, literally everyone was going nuts for the Silver Jubilee. This was where, in a last Imperial hurrah, the UK threw an enormous party to celebrate the 25th anniversary of Queen Elizabeth II's ass ending up on the throne. It was unapologetic jingoism on a scale that has never been repeated and is frankly distasteful and unimaginable to the people of today's UK. The Silver Jubilee lasted all year and was celebrated with street parties and parades throughout the south east of the country, where boot-licking and brow-nosing of the Royals has always been most enthusiastic. In short, a very different world to the one we live in today.


Also in 1977, Star Wars was huge, unimaginably huge, and 2000 AD had been launched to cash in on its success. This issue not so subtly nods to that motivation with a Star War logo - in a font just different enough to avoid legal action - printed nice and big on its cover. 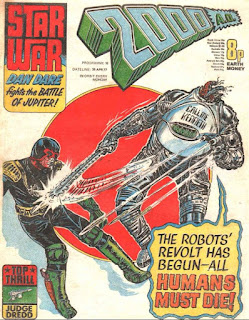 The illustration on the cover that accompanies the logo, however, is more THX 1138 (the movie Lucas made before Star Wars, in 1971, set in a dystopian future in which the populace is controlled by android police) rather than Star Wars itself. In the 2000 AD version of this future, the police officers are human but just as robotic and capable as any android. The cover is by Ezquerra, and his typical organic take on technology can be seen in the robot he has drawn here, even in such an early example of his work.

The first story this week is Invasion, which is a story about Russians - here called Volgans - invading the UK. It was intended to be futuristic at the time but now reads like alternate history. This is a lame brained chunk of machismo, usually, but sometimes has something hidden away within it to somewhat justify its existence. Thus week the story actually starts with quite an interesting hook. A couple of prisoners escape from Dartmoor Prison, and are turned into bones as they try to cross the moor. Next we see Bill Savage and his sidekick, Silk, who are "two hard men sent up from London," to spring a scientist from the prison. They ambush the Volgans by hiding in stone tarns. 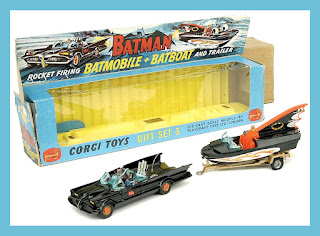 After Invasion comes a great page which advertises the classic Corgi Batman toys. There's a boat, a helicopter, and the Batmobile itself. I remember having the Batmobile and the Batboat, which you could attach to the back of the Batmobile on a trailer, like Batman is a suburban dad taking his boat to the lake to do some fishing. I loved that thing, even though the trailer kept detaching and I thought it was strange that missiles shot out of the pipes on the back. 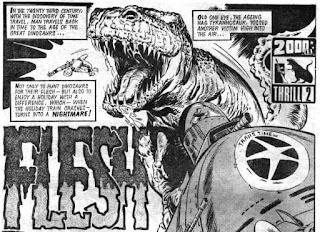 The next story up is Flesh, which is high-concept, high-octane action. In this issue, the dinosaurs are attacking a train. This is the sort of thing I love about this story: the idea that time travelers go back to the Cretaceous to harvest dinosaur meat is great, and then taking it to the logical conclusion that a railway network would be built, is stupendous world building. It's all just a background for cowboys and dinosaurs mayhem, but it is still chef’s kiss level world building. 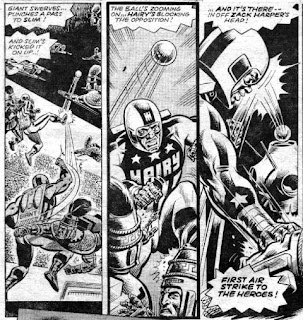 After the futuristic Western that is Flesh, the next story is a futuristic sport story called Harlem Heroes. It's intricately and beautifully drawn, has a killer cyborg, and there is plenty of the mayhem that characterizes 2000 AD issues of this vintage, but it's still a sport story, which I always find limits the plot. It isn't my favorite, but it's still pretty good. The art is by Gibbons, who is perfect for this strip, and his signature can be seen on the first page.

Next comes Dan Dare, who the editors thought was the star of the comic book. On paper he should be. He was a household name in the UK, with almost the recognition factor of American superheroes, and here he has had a 1970s makeover for 2000 AD that makes him look like a glam rocker, but there is something generic and lacking in the execution. Even by the 1970s, a sci-fi story has to be more than space explorers and monsters of the week to catch people's attention. After Star Wars, sci-fi fans were becoming more sophisticated than that. This episode isn’t the worst, however. It's basically a pack of mutated squids in space giving Dan Dare a hard time. They attack by squirting acid slime, which is fun but an impractical space weapon, to say the least. Just as I was smiling at that, one of the squids grabs one of Jupiter's moons and flings it at an enemy. I gasped, I snorted, my mind boggled at the blatant disregard for the laws of physics, and then I smiled in appreciation. This is sci-fi action with a very large pinch of pulp. 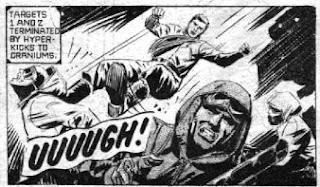 After this comes MACH1, which is a super-spy strip. It's a mixture of Nick Fury and The Professionals. It is all action, just like the other strips but, along with Invasion, there is something very dated about it now.

Lastly, we have the raw star power that is Judge Dredd. There are stupid things in this story, such as the kill crazy robot who is steeling... oil. That's the sort of plot point you might find in an episode of Futurama. But, despite the crazy, comic-book ideas, it does have something to say about AI and the possibility of a robot uprising. 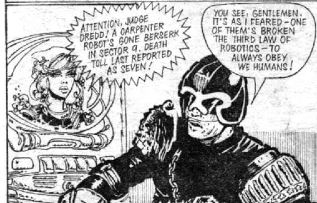 Unfortunately this story also introduces one of the few female characters this week, and she is a secretary. Stuff like this, the absolute and total failure to pass the Bechdel test - really date this comic book. Even today there is still some way to go in dismantling the patriarchy, but life in the UK is not anywhere near as sexist as it was back in 1977. 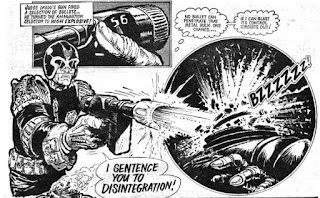 The story quickly degenerates into a fight between Dredd and the rampaging carpenter robot (hey is that a reference to Jesus?) Dredd blasts off its head, but its brain is in its belly, so it keeps coming. It is a great story in a great comic book that is full of ideas.