I'm talking about the comic book called 2000 AD again, specifically an ancient issue from way back in 1979. I've written about this comic book so often that I have put together a 2000 AD page where I link to all the issues I have talked about before. 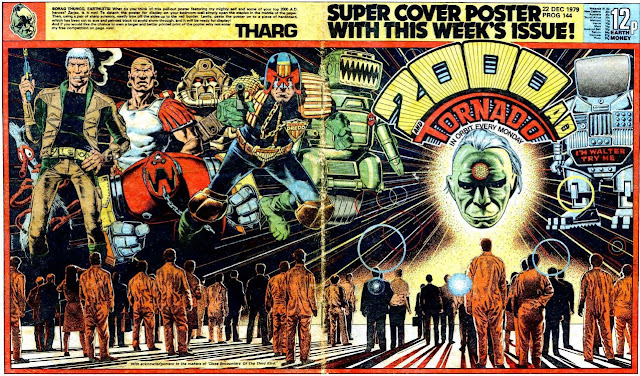 This issue has a well drawn wrap around cover featuring some of the stars of the comic book. It’s intended to be stuck up on a bedroom wall as a poster, but I doubt anyone actually did that. The artist who has crated this cover is competent, but isn't one of the stars. The cover also includes an image from Close Encounters of the Third Kind, which has nothing to do with 2000 AD at all. It's a nic cover, but far from a classic. 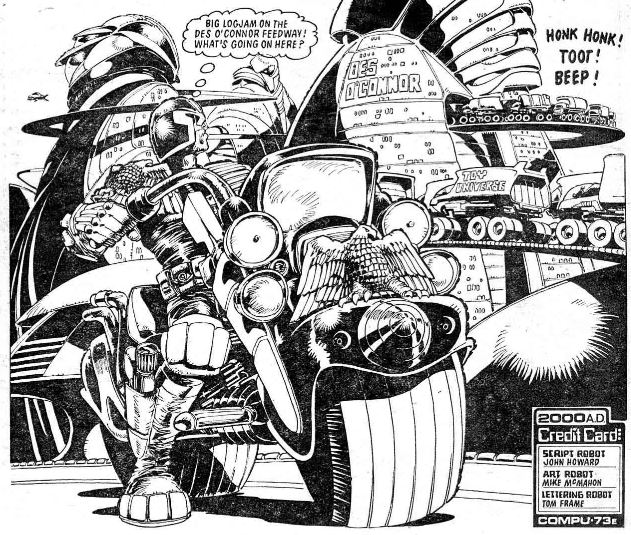 Inside, Judge Dredd is first strip up, as usual, and after a long run of art by the second rank artist Tim Smith, we have a real star doing the art this issue, Mike McMahon. Yay! Just look at this drawing of Dredd on his special hog, the Lawmaster. Comparing it to the drawing of Dredd on the cover just hammers home how much McMahon was head and shoulders above most of the other comic book artists working anywhere in the world at that time. 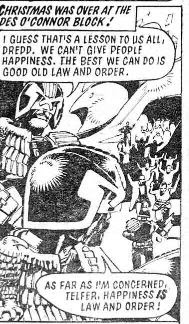 The city blocks of Mega City One are humorously and anachronistically named after B list British celebrities, but this time they are taking things a little to far. It is just jarring to see a city block in this future American city that is named after Des O’Connor. Des was an entertainer from 1970s UK variety TV. But then again this is a Christmas story, so perhaps the Des O’Connor Block is just right. There is also a nice panel of Dredd punching a guy in a Santa outfit.

Next we have a little treat, a story featuting Ro-Jaws drawn by the talented Kevin O’Neil, famous for his razor-sharp lines and frenzied accumulations of detail. Ro-Jaws doesn’t feel well, so his old friend and colleague Hammerstein, an army-surplus war droid, jams his hand down Ro-Jaws’ throat to see if he can find the blockage. This, of course, gives O’Neil a chance to lovingly draw the garbage within Ro-Jaws’ belly. 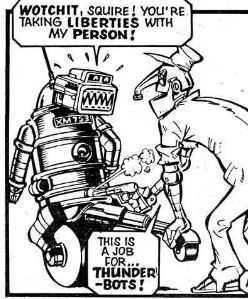 Unfortunately Hammerstein isn’t successful in his amateur doctoring, so Ro-Jaws has to go to the workshop, where the mechanic injects him with a kind of nanite called a thunderbot. The valve he uses to inject it is amusing, and a good example of British, toilet humor.

The thunderbots find an empty tin of Heinz Laser-Baked Beans in Soy Sauce, and that actually sounds pretty tasty to me, and behind it the blockage, which turns out to be some of Hammerstein’s old medals. Ro-Jaws ate them because he was annoyed at Hammerstein showing off with his starring role in the ABC Warriors strip. I very much enjoyed this strip, with its mixture of nostalgia, toilet humor, and top-notch art.

Next up is the Stainless Steel Rat, which I am also enjoying immensely. It is not super hard sci-fi (to say the least), and has a nice Golden Age anachronistic tone to it. It felt old-fashioned even back in the 1970s when this comic book was published. If you read it for what it is, it has a lot to offer. As an added bonus, the artist, Ezquerra, does some really nice spaceship designs, and puts a lot of work into rendering them on the page. 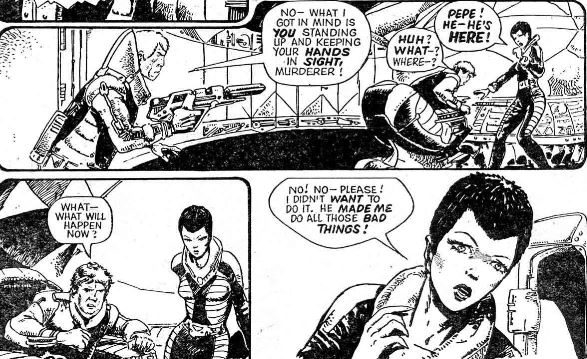 The strip has the main character breaking the fourth walk and speaking directly to the reader, which comes across as something rare and classy. Some of Ezquera’s comic-book panels approach the level of concept art, with an airlock thumping into place, and a great design for a space suit, for example. Our hero assumes the man he captures is the big bad, and the young woman on the bridge escapes while he deals with him. It is only later hat he realizes his mistake. Sure, it’s a tropey and old fashioned story, but there is stuff to enjoy here.