On this blog I write a lot about early issues of a comic book called 2000 AD, because reading it was a very formative experience for me, in fact I still read it today. I have a 2000 AD page where I link to all the issues I have talked about on this site. This particular issue has, yet again, a 'super cover' but it is a very nicely drawn one. It is by Kevin O'Neil, and the super cover format might actually fit with his inventive, intricate and dense style. I still think the comic book should be featuring a character from within its pages on the cover, but if they insist on these covers based on one-off short stories, then at least they should be using artists as talented as Kevin O'Neil. 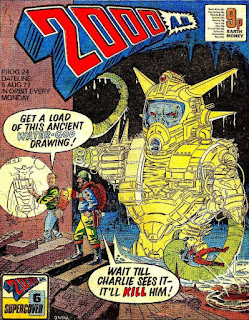 You almost don't need to read the story itself, the whole narrative is right here in the drawing. The story reads from left to right with archaeologists discovering a drawing of an underground lake god, the appearance of that god happens in the middle, and the murder of the most cowardly team member happens at the right, just like the three-paragraph story inside the comic book. I still hope they get rid of these super covers some time soon, but this is a good one. The monster is typical of O'Neil, and is a chthonic monster in - for some reason - a space suit. It looks detailed and bad ass, and I love it.

The first story this week is Invasion, which is drawn by Pino, I think, with a real energy and rawness that suits this gritty strip. Unusually, this week's story is built around a sci-fi concept, a man seeking missile. The resistance combat this missile by emulating Wile E. Coyote and using flexible palm trees to catapult blocks of stone at the missile launcher. I don't mind a little suspension of disbelief in these half-baked comic book stories, but that is ridiculous. This plan just wouldn't work, and even if it would work, there are no flexible palm trees in the Hadrian's Wall area, where this episode is set. The trees there are windswept and scrubby things that would snap in two if you hung a big rock off one. I also don't like the fact that they introduce the concept of man seeking missiles and don't force the protagonists to somehow defeat them with a clever defense, or turn them against the enemy with a clever trick. Leaving that thread hanging this way is just sloppy writing. The art is great though. Very good. 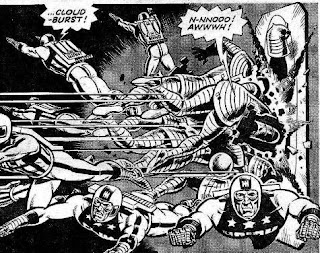 Harlem Heroes is next and they introduce a concept that is on scientific ground that is just as unsteady as man seeking missiles. At the start of the story, a brain in a jar uses its mind powers on a man to give him visions so terrifying that his nervous system is then clogged by fear. That part of the story is actually interesting, but then the story gets back to being built around national stereotypes. A Japanese future sport team is defeated when they repeatedly use kamikaze tactics to their own detriment.

Mach 1 is the next story, and where the early installments of this super-spy story have been very firmly grounded in reality, this story, however, heads off into much more fantasy inspired realms.
This week's enemy operates a very strange smuggling scheme that involves buying dead bodies, filling them with molten gold and then dumping them into the sea. It is macabre and doesn't make any sense at all. The story itself is dull, and the art by Belardinelli just doesn't feel like Mach 1. It’s the only story this week that is a complete waste of space.

Next we have three-pages about how cool 2000 AD and its alien editor Tharg is. It is basically an advert for the comic book in the form of a story. We see a kid who is a fan of Wonder comics, which is very obviously Marvel, and is wearing a Hulk T-shirt, although Hulk is here styled as Bulk. Hulk was the most popular Marvel character in the UK by far at this time (and would soon be a TV show), so it makes sense that 2000 AD are gunning for that audience. The strip is drawn by Kevin O'Neil, the same artist who created the amazing cover, but his talent is wasted on this. Interestingly, it features Robot Archie from Lion, and it is nice to see this character. There is no reason for him to be here, but I sure enjoy seeing him. 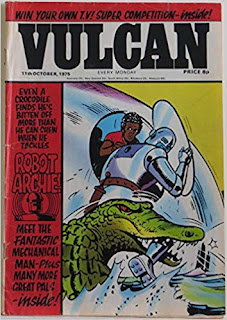 Robot Archie first appeared in 1952, when he began his career as The Jungle Robot in a strip that lasted 25 weeks before it took a five-year hiatus. He returned in 1957 as Archie, The Robot Explorer, eventually becoming better known as Robot Archie. His career ended when the Lion comic book was finally canceled in May 1974. However, Robot Archie strips came back, redrawn in color in Vulcan, a short-lived weekly title which lasted until 1976. After that, Robot Archie entered publishing limbo but remained well-loved by fans, and would have been recognized by most readers at this time in 1977.

Shako is the next story, and I have been thoroughly enjoying it. It is like Jaws meets The Terror (season one) but with the devil-may care, bloodthirsty attitude to storytelling that was prevalent in British comic book stories of this period. This week two elite snipers compete to bag the rogue polar bear with the secret capsule in its belly. The snipers kill Shako's wife and cubs, and then are brutally killed by Shako in return. One of them is stripped and humiliated by the bear before being killed. It is amazing to me that comic strips like this were written for kids. It is messed up to an extreme degree and simply fascinating to read. 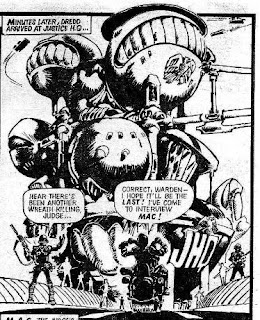 The last story is Judge Dredd, who with inspired art by McMahon is already emerging as the star of the comic book, even if the editorial team might not yet realize it. It has the bloodthirsty glee of Shako combined with the sci-fi concepts glimpsed in Invasion and Harlem Heroes, and it is built on a very sophisticated examination of the appeal of authoritarianism. This strip is still very raw, but the architecture of Mega City One is taking its organic shape and Dredd's gun self-destructs for the first time when a criminal tries to use it. This was a great issue and I enjoyed it a lot.