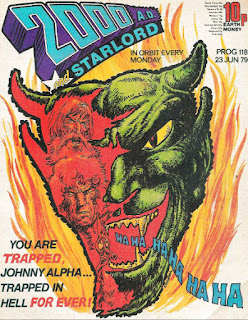 In this latest installment of a continuing series of blog posts I am reading an old comic book. And when I say old, I’m not joking. This issue of 2000 AD was released in June 1979. I write a lot about 2000 AD, because it was a very formative experience for me, and I still read it today. I have a 2000 AD page where I link to all the issues I have talked about on this site.

I cannot overstate how different life was way back in the late 1970s, but I can give you a flavor. This was a world where a stripped down cassette player was considered high tech, as 1979 was the year that Sony launched the Walkman, which sold in the US for $200. 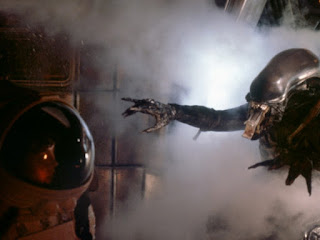 Alien was released the month before this comic book was published, on May 25, 1979 in the United States, but we had to wait until September 6 to see it at the cinema in the United Kingdom, except I couldn’t: I was only ten and Alien was rated X, which restricted it to those aged at least 18. In a recent interview, the current head of the British board of film classification said that if it were to be released today, Alien would be granted a 15 certificate, which I guess means I still wouldn’t have been able to go and see it. But it shows how much the world has changed. 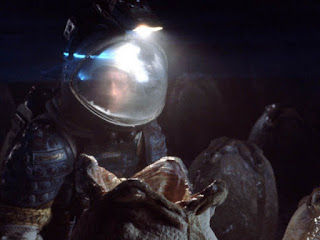 It was not the gory scenes of the extra terrestrial beast stalking and killing the terrified crew that earned it the adults only rating. Apparently the censors found the monster too sexual and thought it presented a perverse view of reproduction which, it was thought, would be too much for teenage minds.Again, times change. 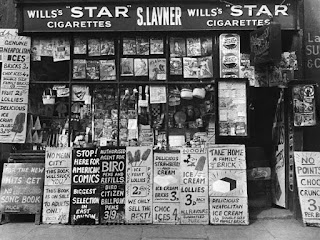 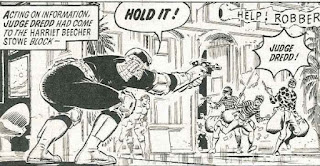 The first story in this issue, as usual, is the comic book’s star character, Judge Dredd. Ron Smith is drawing Dredd again this week. Over the last few issues, I have been starting to like Ron Smith’s art, but in this issue we see some of the excesses in his drawing style that give me pause. He has drawn Dredd looking a little plump and unhealthy, including an amusing shot of Dredd looking less than heroic, with a fat ass turned to the camera. 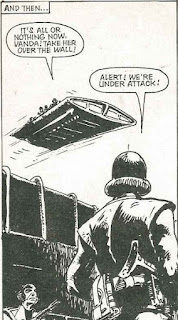 The next strip has art credited to L. J. Silver, the old pirate from Treasure Island but is very obviously actually by Carlos Ezquerra. It turns out he is being given anonymity because he is acting here as an executioner. On the block is a strip called Rick Random. The story, if you can call it that, is well summed up by the caption to one of the frames that reads: In the death filled chaos that followed.

That is poetry – pure and simple – comic-book poetry. Sadly, the strip has degenerated into an ordinary action story, from the sci-fi detective tale that it started out as. It is a sad sight to behold, and the artist was probably changed because this strip is being wrapped up and killed in this single issue, and the original artist didn’t have the heart to do it. We will never see this interesting comic strip again. 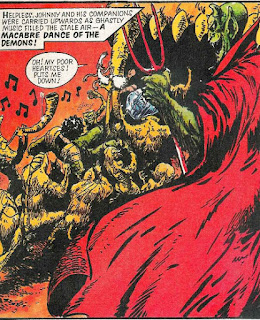 Next comes Strontium Dog, and after his cover appearance, the Devil is here as the bad guy in this story. Of course, it turns out that this isn’t the Devil after all. There is a mad scientist operating everything, Oz style, from behind the curtain. 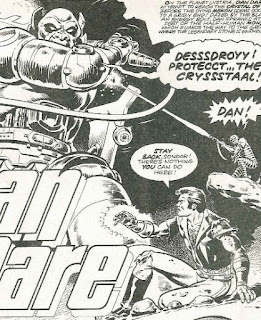 Dan Dare is next, and he is still fighting the monster he has been battling for four or five issues. This story is paced very, very slowly. The art is beautiful, as usual, but the storytelling has been lackluster so far. There is hope for the future however, because Dan is heading off planet, and he will have to search for his archenemy across the galaxy now. This has not been my favorite strip, with Dan trapped on a swamp planet with amnesia, but now it certainly looks like it is about to turn into the action-packed space opera it should be. 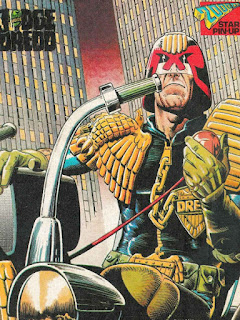 The last treasure offered up by this ancient comic book is a poster of Judge Dredd drawn by one of the most popular of comic book artists, ever. The poster shows Dredd in a sleepy pose, sitting on his bike and chatting on his radio. It’s skillfully drawn, but without much actually going on, which is typical of the artist, Bolland. The city behind him doesn’t look particularly futuristic either, just a couple of generic tower blocks. Even though Bolland has taken the time to meticulously draw every single window, it isn’t particularly evocative of a future megalopolis. In case you haven’t guessed, I don’t rate Bolland quite as highly as a lot of other fans. I will also never forgive him for The Killing Joke, which he was a driving force behind.