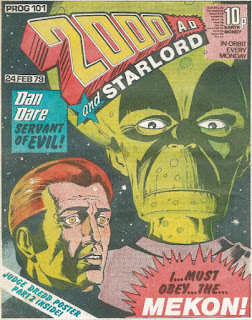 Once again, I am reading a comic book from long, long ago. It is a comic book called 2000 AD, which seemed like a very futuristic date back in the 1970s. I write a lot about 2000 AD, it was a very formative experience for me, and I still read it today. I have a 2000 AD page where I link to all the issues I have talked about on this site. This particular issue is from way back in late February 1979 but this one doesn’t have a particularly inspiring cover. It is just Dan Dare, with his nemesis, the Mekon, behind him. It may only be two heads, but when they are as recognizable as Dan Dare and the Mekon, the comic book will most likely have sold respectably despite the lack of any particular action. 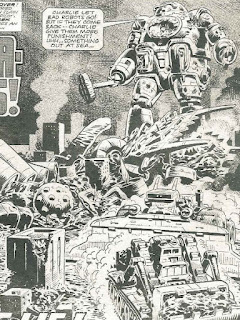 The first story this week is Ro-Busters, and we find a giant robot called Charlie standing among the remains of the Terra-Meks, a gang of evil giant robots who wanted to destroy his town. I have been enjoying this story immensely, and it is very, very sad to see it wrapping up this week. It is an absolute classic, and beautifully drawn. To give just one example of the excellent comic book writing, in just one small panel, and with just a few strokes of the pen, we see a frigate and two brief text boxes. Charlie may have saved his city but he is not out of trouble yet. His primary purpose is to help shipping, and that is to be used as his undoing. 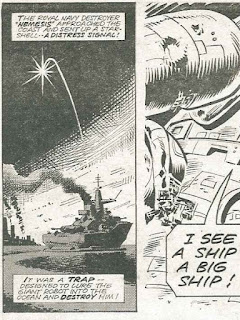 It’s a horrible betrayal of the kindly robot, and the emotions are quite gut wrenching when the ship he is coming out to save opens fire on him. The story has a happy ending, though, because Charlie comes back from his watery grave… And receives a hero’s welcome from the city he saved. I love giant robot action, and this is some of the highest quality giant-robot slugging you are likely to find. All the action was last week, but this week, in the final episode, is when the feels really hit home. 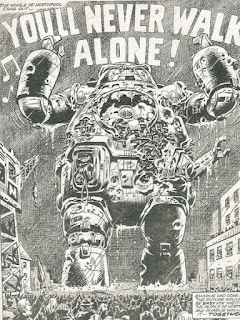 After this classic, both Judge Dredd and Robo-Hunter are a little lackluster this week. In Judge Dredd we see the lawman in a protracted fight with an imbecile that lives in the sewers beneath the future city. Robo-Hunter is in a sewer too, and he is mobbed by robotic sewer rats before being rescued by a sewer robot named B.O. It isn’t bad stuff, exactly, but it pales in comparison with Ro-Busters. 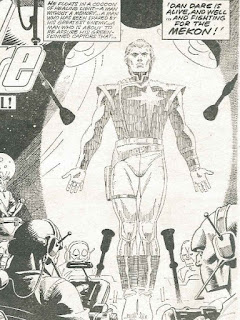 The Dan Dare story that comes next, however, is interesting. Dan gets a cool new look, but that look is chosen for him by his nemesis. There are some nice, absolutely evil and ferocious aliens to fight, but he is fighting them as his arch-enemy’s champion. It is interesting and beautifully drawn stuff.


This version of Dan Dare is recovering from being injured in a reactor explosion. The space hero has been awoken from suspended animation decades into his own future after his crew were wiped out and his Space Fortress destroyed. Dare now finds himself under the mental domination of the Mekon, and there is a lot of potential for his adventures to come. Sadly Dan Dare was never quite the success in 2000AD that was hoped for, and the series will soon be retired (in the summer of 1979) but it starts strong and this episode is fun.

Ro-Busters is drawn by Dave Gibbons, and so is Dan Dare. The two stand out stories from this comic, both incredibly detailed classics, created by the same artist. It just goes to show what a hard-working artist Gibbons is. I find his stuff a little stiff and uninspired, sometimes, but there is no doubting he brought his A game to this old issue of 2000 AD.

Dave Gibbons, of course, is the man who co-created Watchmen in 1986 with the writer Alan Moore. Time magazine called him, "a genius – one of the major comic book artists of the 21st century." Comic Sans, a Microsoft typeface, was partly derived from his Watchmen lettering.

Dave Gibbons, first comics laureate is regarded as one of the UK’s best comics artists, and he has worked on Green Lantern and Batman. Gibbons has vivid memories of the prefects at his school going through his desk and confiscating comics and burning them. He saw a recent prospectus for the school, and it included a page of famous old boys. As well as Tim Rice, and Stephen Hawking, it also had Dave Gibbons, the comics guy. To go from burning books to being proud of him shows how mainstream he has become.