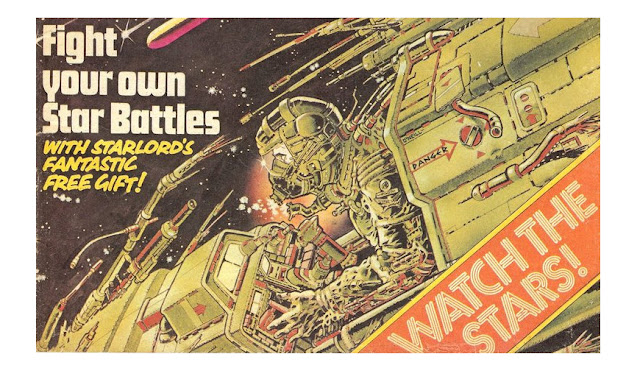 Regular readers on my blog will know that I have decided to read every issue of Star Lord, a short-lived British sci-fi comic of the late 70s. I’ve reached issue three of this undertaking, and it is the best so far. After two underwhelming covers, this week’s cover is one of the classics. It is the work of KevinO’Neill, and showcases his talent for creating complex and beautiful spaceship designs. It’s a colorful and evocative image, and I undoubtedly liked it very much back in 1978, and I still do. 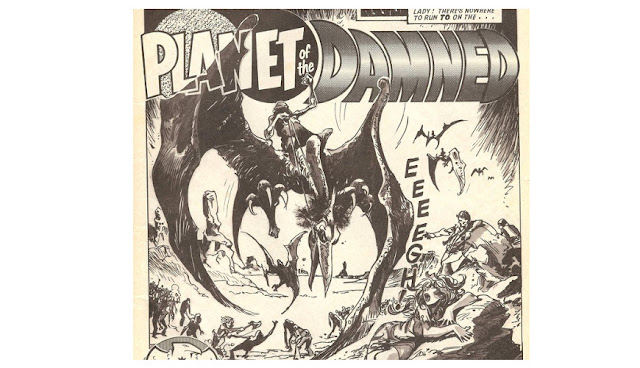 
The group are vastly outnumbered by the aliens, and they are in deep trouble until they are saved by a second group called Charlie’s Angels. It’s fun to see these cultural references from the 70s turn up in the comic. It isn’t THE Charlie’s Angels from TV, of course, but just a band of post-apocalyptic crazies who coincidentally have the same name. It’s a solid and enjoyable story, as usual. The concept for Planet of the Damned is out there, that’s for sure, but it’s a quality strip. 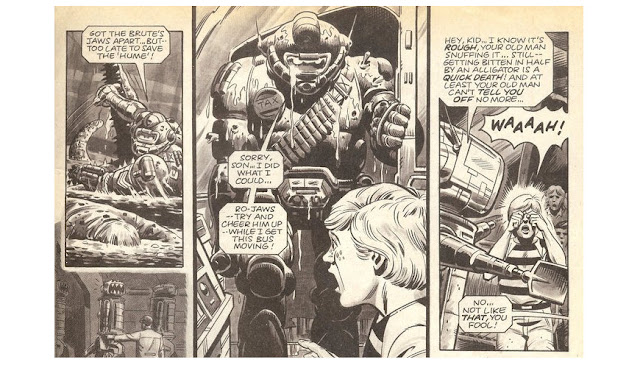 Next comes Ro-Busters, here drawn by Dave Gibbons. He is best known for his collaborations with writer Alan Moore, which include the miniseries Watchmen. I was never a huge fan because, though the art is beautiful and detailed, it isn’t hugely dynamic. It’s very carefully drawn, which often has the side effect that the art turns out static. He is obviously a very talented artist though, and his work fits this strip about robots very well. In this episode, the heroic robots are rescuing a bus load of children from alligators driven into a kill frenzy by escaped gas. The background of almost every frame has somebody meeting a messy end in the jaws of an alligator. One of the children loses their father, bitten in half by an alligator, and the attempts of Ro-Jaws, the ex-garbage droid, to comfort him are hilarious. I still think the humor of the situation is really quite sophisticated, for a comic book.

On the next page is some text about being a future tank commander, which isn’t hugely inspiring, but tucked away in a corner is a wonderful drawing of a cyborg t-rex the size of a building. It’s just a throwaway little thing, but it’s a gem. It’s exactly the sort of thing nine-year-old me loved back then. 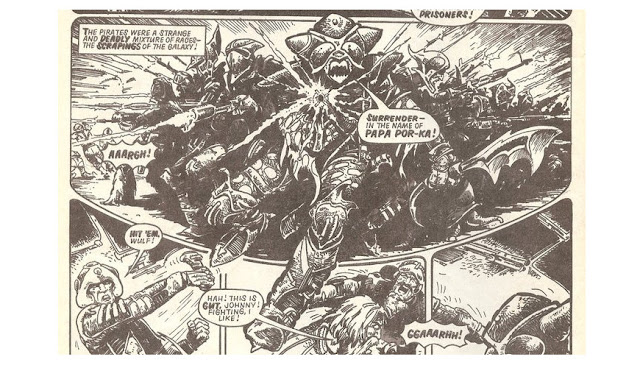 Next we have Strontium Dog. This is another classic story from Starlord, and this is shaping up to be a classic issue of the comic. It’s just one excellent strip after another. It’s an episode I remember, where the team picks up the Gronk, and where Johnny Alpha and Wolf have to deal with space pirates. The two bounty hunters are traveling on a cruise ship, and the pirates suddenly attack. The boarding pirates are particularly well drawn by Carlos Ezquerra as they fight their way onto the starliner.

The story next up is Mind Wars, another one I enjoyed then, and am enjoying reading over again now. The story is about twins with mind powers, and this week they are on trial for the shenanigans they got up to last week. Soon they are mind-controlled by aliens and forced to use their mind powers to hurt the people in the courtroom. Instead they teleport away. It’s a nice surprise to suddenly see the two empty seats, and shows just how powerful the two are.

At last we come to a strip that is not one of my favorites, TimeQuake. TimeQuake is a confusing mess, with a hero who keeps punching people for no good reason. It’s fine to have the weak strip hidden away at the back of the comic, I guess, because other than TimeQuake, this really was a very enjoyable issue indeed. I’m quite pleased about getting to read these comic books again, and I’ll be getting to issue four soon.
Labels: Prog Slog Starlord