I have written a lot of posts about a comic book called 2000 AD, because reading it was a very formative experience for me, and I still read it today. I have a 2000 AD page where I link to all the issues I have talked about on this site. This post is about issue 137, which has Black Hawk on the cover, though it isn’t enormously attractive. 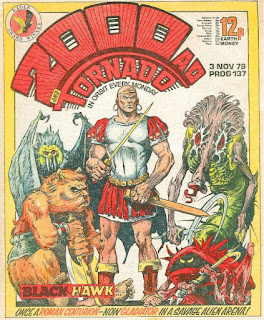 The aliens accompanying Black Hawk are certainly inventive and well drawn, but they are not in the slightest frightening or cool looking. Black Hawk has also been whitewashed here. He is a black character, but has been given some very pale, Caucasian skin. 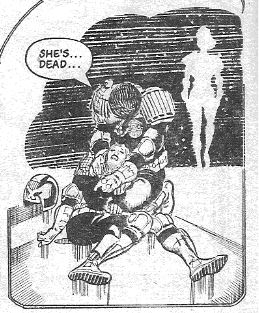 Judge Dredd is the first story and it is drawn this week by Ron Smith, who is a pretty good artist, top of the second division. He is far from my favorite though. The story is also pretty lame, and it starts with a fridging of a female judge, so minus points already and the story doesn’t get any better from there. 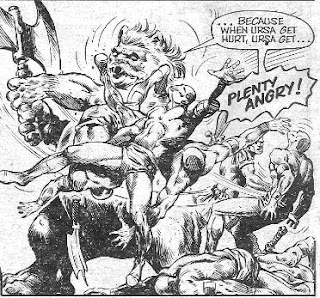 Next we have the story from the cover, Black Hawk, which is just as disappointing as the Judge Dredd story, but at least Belardinelli manages to create an intriguing spaceship design for the last panel of the strip. It isn’t much, but it’s something.

Things improve enormously with ABC Warriors, which is drawn by the mega-talent Mike McMahon. It also has a giant robot in it, which gives bonus points in my book. The giant robot is called George and it is an interesting creation. It is a little like a dinosaur, in that it has more than one brain. They all need to coordinate to move its giant body. The problem is George’s brains can’t get it together, so he stomps in an uncoordinated way round the landscape, like he is playing the part of John Cleese in the Ministry of Silly Walks sketch from Monty Python’s Flying Circus. 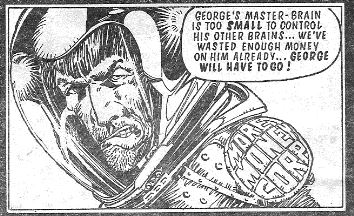 Some pilots of corporate bombers buzz George for fun on their way to napalm bomb a farm that is not using their corporation’s products. In the comic the company is called Bioil, but you can easily imagine substituting the name Monsanto. I don’t think Monsanto has used napalm bombs on small farmers... yet, but they are extremely hostile toward them and don’t hesitate to send the lawyers. 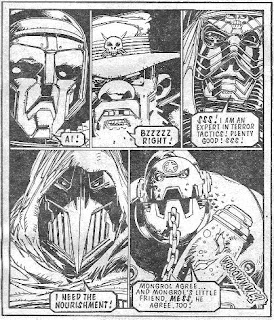 Then the ABC Warriors arrive, just seven robots sent to pacify an entire planet, to protect the little guy against the corporations. They are so heroic it brings a tear to the eye, even if they are anti-heroes, and then some.

Biol isn’t the only company exploiting Mars, there is also the charmingly named More Money Corp. and they are all fighting for a piece of the pie. When you see what corporations do in Africa, the Middle East and all over the world, it is not hard to imagine that colonization of Mars would very soon turn into all out war between militarized corporations, as depicted in this comic book. Anyway, enough politics. One of the nice things about the ABC Warriors is that all the different robots have their own vice. There is an old robot, Happy Shrapnel, whose speech is interrupted by glitches. Every now and again he says bzzt instead of a word. Every time this happens, in my mind I replace it with the F word. The beauty of this is that the F word can be placed in any position in a sentence, and it is the sort of language this old robot would use.