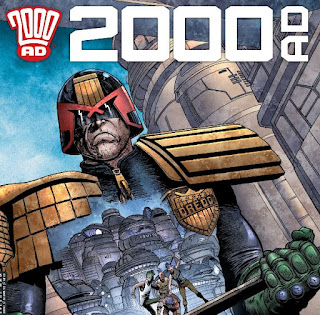 There is a nice cover to this issue, if a bit bland. It's just a picture of Judge Dredd, not much more than that. But, then again, what more should it be? 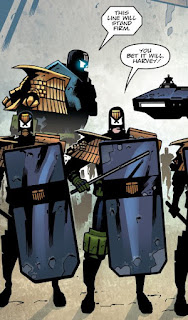 The Dredd strip is the first one up, and it gets going quickly. There is a coup in the offing and we still don't know what side Dredd is on. That question alone is enough to generate a lot of interest. The art is also up to the usual high standards. There is a great panel where the robot judge, Harvey, is towering above a line of human judges, like a giant mechanical beast.

Then we head into some strange political territory when a character called Bub Rubbinson (obviously intended as a Tommy Robinson stand in) ascends a soap box. Things get confused, and there's a suicide bomber thrown into the story because... to be honest, there is no reason that I can fathom for a suicide bomber to be there in this story. He's also drawn as a Voodoo priest, so, erm, yeah, that's confusing. But we find out whose side Dredd is on. He stands with the chief judge, not the cabal attempting a coup. Ha! I knew it!

Next comes Skip Tracer, and I still don't know what the heck is going on. He seems to be a superhero with powers based on colors. He was refused entry to the stadium full of people he has to save, so he makes everything go green, and suddenly he is inside. He can't find the bomber, so he makes everything go purple, and suddenly: bomber found. Then he gets ambushed in the middle of a giant stadium crowd, how does that work? But the ambusher just stuns him and wanders off. What's the motivation behind that? Then we find out the bomber is just a kid, with a big red countdown on the bomb. So another tropey and confusing episode.


The time bomb trope in particular is one of the most popular in genre writing. It adds a sense of urgency to the story, but is actually in contrast to real-life bombs which are camouflaged and seldom, if ever, include a visible timer. Most bombs even lack a timer entirely, and are remote detonated from a safe distance, but it is much less dramatic. There would probably be a lot more dead heroes if the villains would stop putting timers on their bombs.

Next comes part 2 of the Tharg's 3riller that started last week. It did not make a good first impression on me, as it was a mix of torture and racism, not two of my favorite story elements.The torture continues this episode, but weirdly the torturer explains what is going on to the guy being tortured, in an extended soliloquy. This made for some pretty awkward exposition. Then there is a bunch more torture, and a room full of people get taken out in flashback. I get the feel the writer is going for a John Wick kind of thing, but with a hit man that looks like a 1970s British spy. With only one more episode to go, I don't know how they are going to bring this to an end and have it make sense. At least, on a plus point, it wasn't racist this time. 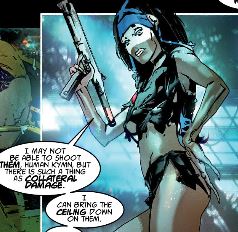 Next comes Grey Area, and I had such high hopes for this strip, but it has gone from bad to worse. This week we have the same white people shooting aliens, many of them drawn as coded black, in an immigration area, but this time one of them is doing it in a bikini. A Bikini... yeesh. Bikini lady shows some underboob, is then called a bitch, and coldcocked, before being rescued by Ronald Reagan with a six gun. I do not understand what's going on, and I'm not sure I want to.

Jaegir comes next, with some nice, atmospheric art to ease us into the strip, and some lovely drawings of futuristic military hardware throughout. That may not be everyone's cup of tea, but I love it. It's a great story, but I would have preferred the capture of the main character not to be accompanied by her being called a bitch. That's twice in one issue, 2000 AD, c'mon. This does not happen to male heroes when they get captured. I have never seen Joe Dredd with a boot on his throat being called any sexualized epithet. This is just not okay.

So, this wasn't a great issue. It was confused, tropey, cheesecake, sexist, and it is sadly obvious that the creative team lacks diversity. I am going to have to be careful that I don't start hate reading this comic book.I think I'm going to be back next week, but I'm not sure. This comic book needs to grow, the eF up.
Before we wrap up here, just a reminder that the best way to support this blog is to buy one of my books, so why not go over to Amazon, or Kobo and see if there is one that catches your fancy.
Labels: 2000 AD British Comic Book