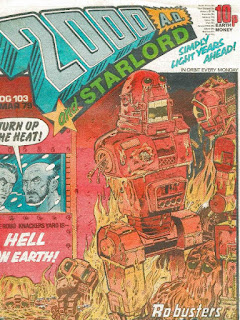 I write a lot about 2000 AD, it was a very formative experience for me, and I still read it today. I have a 2000 AD page where I link to all the issues I have talked about on this site. This issue has a much better cover than some we have seen recently. It is drawn by the talented Kevin O’Neil, and actually features some action. There are a group of robots being tortured and killed by evil humans. One of the robots has “KILROY WAZ HERE” scratched into its chest, the way people scratch graffiti into train and bus windows with the point of a key.

Kilroy was here is an expression that became popular during World War II, and used to be often seen in graffiti. Kilroy graffiti isn’t as popular now as it once was, but back in the 1970s, when this comic book was first published, people all over the world still scribbled "Kilroy was here" everywhere.

The poor robot with the graffiti scratched into it has also had its arms pulled off and its eyes are melting in the heat of whatever smelter is being used to melt him and his friends down for scrap. The colors are great, too, with the inside of the furnace a hot red and the outside, seen through a small window, a cool blue.


The first story up inside the comic is Judge Dredd, and this week Judge Dredd is wandering round in the sewers again. It is not a great episode of this classic strip, but don’t worry, this issue still has some treasures to come. 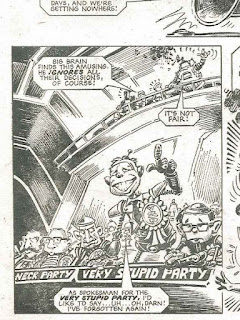 The second story, Robo-Hunter, is not one of the treasures. It has too many failed attempts at humor for me to warm to it. There is a political party of robots called the Very Stupid Party, for example, which is pretty broad for satire.

Dan Dare is the next story, and things start to improve. It has some great art by Dave Gibbons. He draws wonderful spaceships, and other sci-fi equipment for the strip, and there is plenty of action, with fisticuffs and spaceship dogfighting. But this isn’t the gem I’m talking about, that gem comes next. 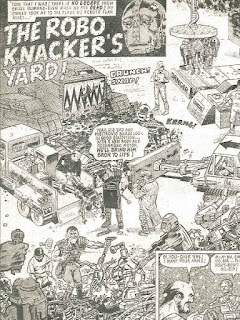 What follows is something truly special, the first episode of a Ro-Busters story called The Fall and Rise of Ro-Jaws and Hammerstein, a true classic among early 2000 AD stories. And the episode is, like the cover, drawn by the creative genius known as Kevin O’Neil. Every frame is drenched in delicious droid detail, and the ideas on display, even in the backgrounds, are rich fodder for the imagination. 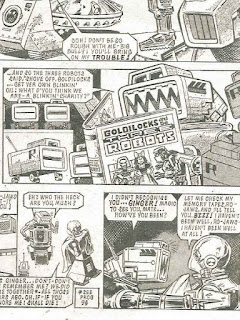 For example, we have Ro-Jaws telling a bedtime story to little robots in a throwaway single panel image. It’s delightful, especially the way he changes the ending so the robots in the story are telling Goldilocks to get lost. We also get a full page spread of a Boschian vision of hell, but it is a hell for robots, called the Robo Knackers Yard, and it shows off O’Neil’s talent for detail perfectly.

Judge Dredd’s robot, Walter, is hidden among the pile of old robots, as a nice little Easter egg. R2-D2 can also be seen among the robots being torn apart for scrap. 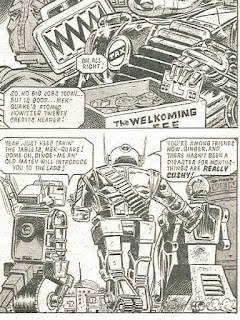 Kevin O’Neil’s art isn’t without its idiosyncrasies, though. We see his limitations for example in this panel, where Hammerstein’s dimensions are all wrong. The tall robot has been squished down to fit a landscape panel and looks like he is being reflected in a fun-house mirror. But the detail in the panel is at the same high level as usual.

The story ends with Howard Quartz deciding to blow up a bunch of his robots and claim on the insurance. And, of course, Ro-Jaws and Hammerstein’s names are at the top of the list of robots to be exploded. This act of destruction, foreshadowed at the end of this installment, will forever change the Ro-Busters strip, and will tell a long and moving story about robot emancipation as it does so. I can’t wait.