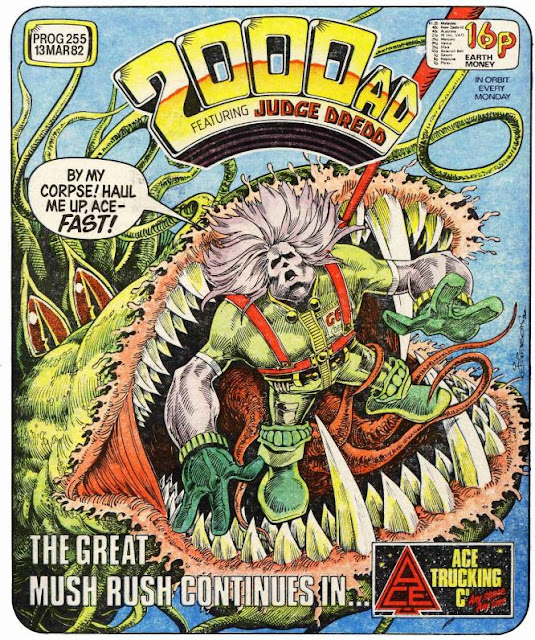 I'm currently doing a prog slog where I read every issue of a comic called 2000 AD. The comic was first published in the 70s, and I have barely scratched the surface after a year of reading. I have so far only reached the 1980s, and issue (or prog) 255. The cover of this issue is just terrible. Even by the standards of the early eighties, when this came out, it is little more than a sketch. The less said about it the better, instead let's take a look inside. 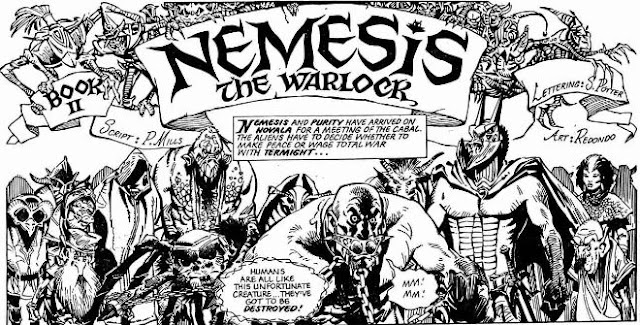 Usually 2000 AD starts each issue with its star, Judge Dredd, or another popular strip, but this issue sees Nemesis the Warlock in first place. I like Nemesis, and I like Redondo's art - though the two aren't a good fit for each other - but I can't imagine it was popular with most of the readership at the time. Nemesis s shown, thanks to his alien physique, as having a twenty-two pack, which made me smile.

The story also has something to say about dictators ruling though manufacturing fear of an outside force. Here a human dictator is stoking fear of aliens. Unusually, there is a female character, a human named Purity, and she is investigating, being brave, and doing useful stuff. Kudos to Nemesis the Warlock for this, because 2000 AD was almost entirely lacking in female characters with agency back then. 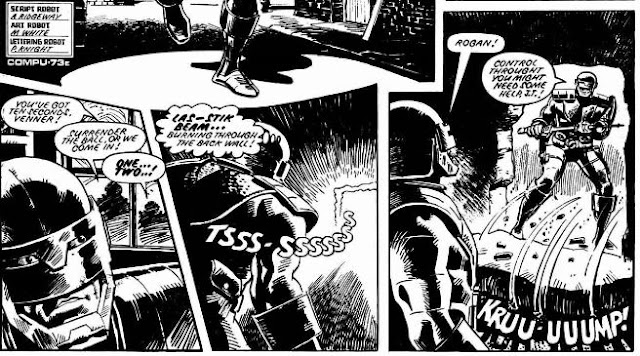 Next comes Mean Arena which is about a gladiatorial future sport, played in evacuated towns. The gladiatorial element keeps increasing, and the interest in the sport elements keeps decreasing as time goes on. This issue sees a new weapon added to the players equipment, a laser capable of cutting through walls.


The players also all have a "droid gun" and this episode becomes almost a war story, as pairs of players patrol, guns drawn. That's not necessarily a bad this, though. Once again I found myself really enjoying this ridiculous, macho, nonsensical story. I particularly like that the armored players are prowling though a deserted, grim, 1980s' UK town .

At one point, one of the players checks Littlewoods for hiding attackers, a store I was dragged to on shopping expeditions on many occasions back then. 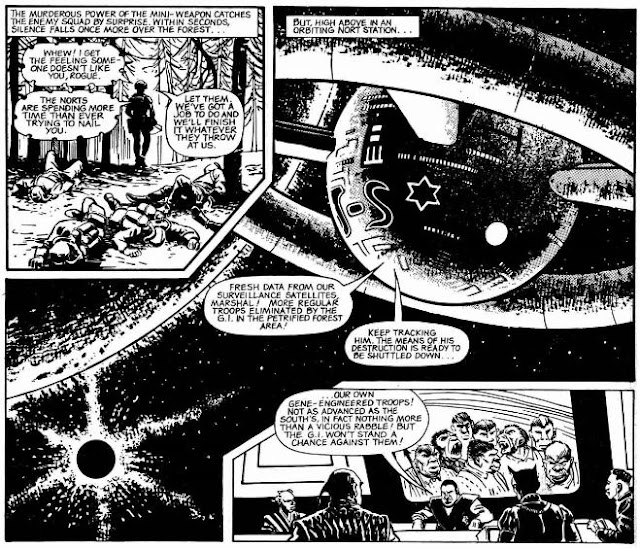 Mean Arena is followed by an actual war story named Rogue Trooper, but it's a future war with genetically engineered soldiers that has completely ruined the planet being fought over. It's actually a powerful metaphor about the transformations brought by war, to combatants and environment alike. Or it might just be more action-driven, macho malarkey. I couldn't decide about this installment. 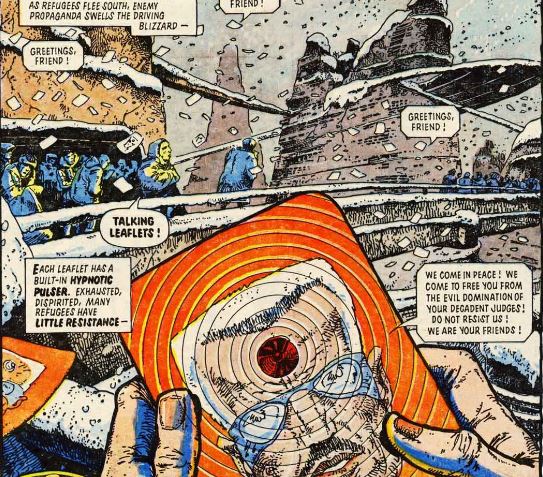 Then Judge Dredd comes, and it is given the comic's only color pages, across a center spread. It too is a war story, specifically a story of invasion by the military of a fragment of future Russia into a future American megacity. There are subtleties in the mayhem, as we see refugees and futuristic propaganda among the fighting. Also Judge Dredd and his team are destroying infrastructure in a bid to halt the invaders' advance, which strikes me as quite complex plotting, but this war story has been dragging on for many weeks. I just want it over, so Dredd can return to being a futuristic cop. 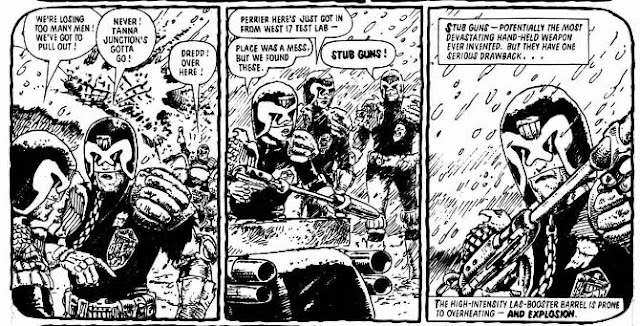 It looks like I may soon get my wish because Dredd's forces find a secret weapon before the end of the installment, the stub gun, so hopefully the invasion arc will swiftly be brought to a close over coming installments.

Next comes Ace Trucking, a humor/space-opera strip that I enjoy. This issue, Ace has to deliver a letter to an island, where the island is on an ocean planet, but not an ocean of water, the surface round the planet's islands is quicksand. Belardinelli draws this environment very nicely, and seeing the Speedo Ghost swoop low over the surface is a delight.

A very pleasing issue, all in all despite the terrible cover. I can't wait for issue 256.
Labels: 2000 AD British Comic Book Prog Slog