This is another post where I write about an old issue 2000 AD, because reading this comic book back in the 1970s was a very formative experience for me, and I still read it today. (I also have a 2000 AD page where I link to all the issues I have talked about on this site.) 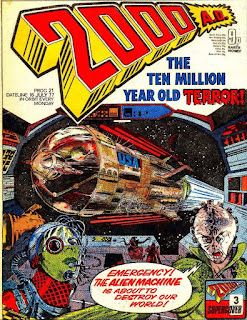 This is the third 'super cover' in a row and it is the worst of the bunch so far. It is just a badly drawn spaceship crewed by two unconvincing aliens. One of the aliens is even directly copied from the Zygons, a famous alien menace on the Doctor Who show that was massive at the time. It is such shoddy art that it should signal the end of these 'super cover' experiments some time soon and we can get back to the traditional job of a comic book cover, which is showcasing the most exciting action to be found within the comic - or acting as an attachment point for a free gift.

After Shako being honored with the prime first story position last week to mark the start of its run, this issue sees Invasion return to claim the coveted first spot. I guess the editors still saw Invasion as their strongest story, and I wonder how long it can last before everyone realizes Dredd is the star of the comic book and he either replaces Invasion as first story or is given the color center pages.

This week Invasion is actually bloodthirsty and inventive enough that I can see why it was still being given first spot. It is as offbeat as an Avengers episode, the Avengers with Steed and Peel, not the other type. This issue we see the evil invaders – the Russians, basically – using humans as clay pigeon targets for a day out shooting, and the heroes infiltrating a stately home by painting themselves alabaster white, replacing the statuary and standing real still. The whole thing is enthusiastically bat shit, and I quite enjoyed it on those terms. I don't think it is exciting or classy enough to hold the number one spot in the comic book forever, but it was a good enough episode for today. 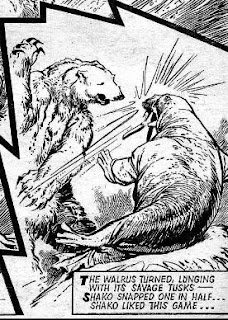 Next comes the second installment of the new strip, Shako. It's about a polar bear who is the horrific nemesis of the humans crewing Ice Station Delta. Unfortunately, along with being an animal avenger, for a strip like this to work, he has to be a hero but this issue starts with Shako being a bit of a dick. He starts a fight with a walrus just for fun and hits the creature so hard in the face that one of its tusks snaps off. That is definitely not cool.

But then one of the humans hunting the bear uses a homophobic insult, and just knowing the bear might eat him suddenly elevates the bear to the status of hero again, at least for me. We're only on page two and already this story is a roller coaster of mixed emotions. Soon Shako is loose among the people, in the confined space of a trawler, and he grabs the captain by the foot. At last the bloodthirsty action begins.

Shako kills the captain and washes him down with the captain's own whiskey (which was spilled on the ice during the grim struggle). That's a body count of only one this issue, but a drunken and murderous polar bear is a nice touch.

Next up is Harlem Heroes which is unrecognizable as a sports strip this issue - even a gladiatorial future sport. Instead it has degenerated into frenetic action, as a revenge crazy cyborg takes on a gang of androids and gets himself killed. He is then remotely reactivated with a jolt to the heart just as he is about to be fed into an incinerator. The cyborg escapes to fight the Harlem Heroes another day, and we find out what the next game will be, against the Bushido Blades in Tokyo, groan.

Next comes Dan Dare, and he is facing off against the giant robots armed with flame throwers we saw at the end of last week's episode. I was half expecting some clever trick to allow Dan and his team to avoid being stomped and incinerated, but no, they just fight the enormous robots and win, in one of the least convincing combat sequences yet depicted in this strip. 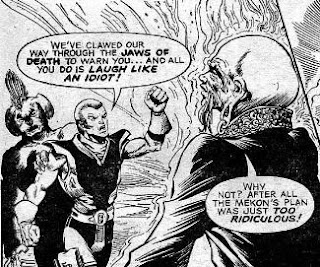 Dan Dare finally makes it to the Council he is trying to warn about an assassination attempt, but they have already saved themselves using mind powers. It's a stupid anticlimax to all Dare's efforts, as generic and nonsensical as they have been, and a strange way to resolve this thread of the story. Dan Dare is the biggest disappointment in the entire comic. He is such an iconic character that something much more compelling could have been done with him, but no. 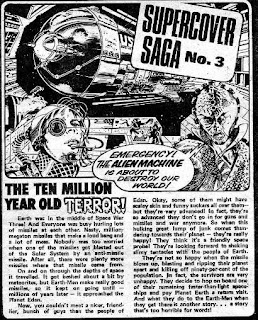 The editorial page is next and it includes the story to accompany the illustration on the cover, all three paragraphs of it. It is written in a weird, childish way, using words like ‘loads’ and ‘nasty’, and represents a precipitous drop in quality from the first 'super cover' just three weeks ago. The end of this strange experiment can't come soon enough. Let's get some Judge Dredd drawn by Mike McMahon on the cover.

Mach 1, the super spy, is in a Howard Hughes inspired story this week, which makes a change from his usual work as a merciless enforcer for British colonialism around the world with a license to kill. The story is very sci-fi, with their version of Howard Hughes turned into a kind of energy vampire who is draining the life force out of athletes to stay alive. I thought the story was great, as long as you suspend disbelief a little. Suspension of disbelief is required with Mach 1 anyway, as his powers come from a kind of super acupuncture.

There is a female character in this episode, who actually has a speaking role of more than a few lines and does not fall in love with our hero or get killed. She just does her thing, almost oblivious of him. It's not the most progressive piece of writing but this is a 1970s comic book so I will take it.

Judge Dredd is next, with an artist who is much more shiny and Art Deco than the more gritty Kitchen Sink sort of portrayal of Dredd's world that I prefer. I'm not saying I don't like it, it's just different. The story is silly but engaging, with a nice twist ending. It also features weather control and I love the way the populace are always voting for sunny days. Not a bad issue of 2000 AD, all in all, I just hope the 'super covers' disappear sooner rather than later and we can get back to normal comic book covers featuring the characters who star in the ongoing stories in the comic book.