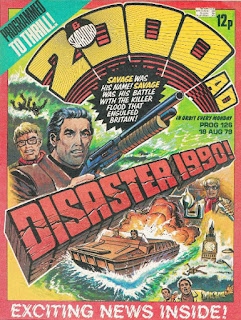 This issue of 2000 AD came out 18 August 1979. That is almost four decades ago, at the time of writing this post, and so the fact that I am actually bothering to write about it shows how much of an impact this comic book had on me when I was a nipper. There is visionary stuff in here, stories that have left a mark on sci-fi that still reverberates today. Okay, I might be overselling it a little, but it really was a great and influential comic book. You wouldn’t guess it from the cover of this issue, though.

What we have here is a badly-drawn mess that is attempting to drum up interest in the adventures of a 1970s, London hard man, dealing with the effects of a devastating flood. The cover could grace any of the pulpy, crime thrillers of the day without much alteration and the only real sci-fi element is the big flood. There is also an awful red border round it, so least said the better, and let's pop this issue open to look at what goodies there might be inside.

We start with Judge Dredd, a brutal lawman from a totalitarian future. The world of Dredd seems to be drifting nearer to us every day, what with the current trends toward extreme patriotism, police state surveillance, and the idea that citizenship is a privileged, not a right. We can only hope we come to our senses before we end up in a future like Dredd’s. The art this week is by a guy called John Cooper. I don't remember him  making an impression at the time, but it really isn’t bad art. It just isn’t as good as the iconic Dredd artists, like McMahon and Ezquerra. 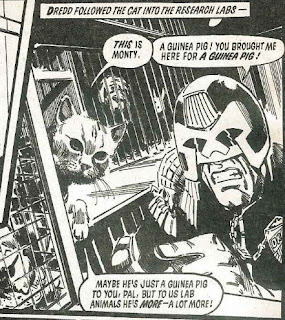 This week Dredd responds to a murder being planned, after being tipped off by a talking cat.
The story is trying to say something about vivisection, but it isn't at all preachy about it, far from it. Instead it’s just an average story about a mad scientist and people of the future having lost their immunity to the common cold. It’s a perfectly serviceable episode of Judge Dredd, and there is nothing wrong with that. 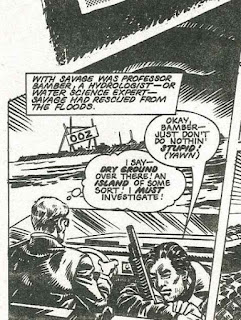 The next story is Disaster 1999! which I am not a fan of. This is the dumb and ordinary strip chosen, for some reason, to feature on the cover this issue. In this episode, Bill Savage gets his first sleep since the UK was flooded. Endearingly he curls up in the passenger seat of his amphibious vehicle, his arms round his shotgun like it was a teddy bear.

I have written, and am still writing a sci-fi series called Dark Galaxy that starts with Galaxy Dog. It is available to buy from Amazon.


He is with an egghead called Bamber, for no better reason than Bamber Gascoigne was the host of a famously difficult TV quiz show of the era, called University Challenge. As he curls up with his shiny new pump action shotgun, Bill tells Bamber not to do anything stupid, just like in that episode of Ren and Stimpy. Bill gets approximately ten seconds sleep before Bamber drives onto the roof of the reptile house at London Zoo and gets them surrounded by alligators.

Then follows some complicated action where the alligators are eaten by piranhas, and then Savage electrocutes the piranhas, with the words, “Frying tonight.” It’s all just a bunch of action and shenanigans, and though it is fun it really shouldn’t be in a sci-fi comic book. 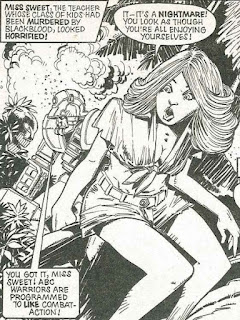 Next come the comic book’s only interior color pages, a single spread, which is given to a classic slice of sci-fi. This strip is a twist on the boy’s comic books with war stories that were extremely popular in the late 1970s. Here the warriors are robots, and they fight for humans, for the stupidest reasons. After a bunch of war robots massacre an entire town, leaving only the kindergarten teacher Miss Sweet alive, we get to see the world of constant warfare through her eyes. It is a fascinating perspective on the beautifully drawn chaos, from the pen of the master, Mike McMahon. 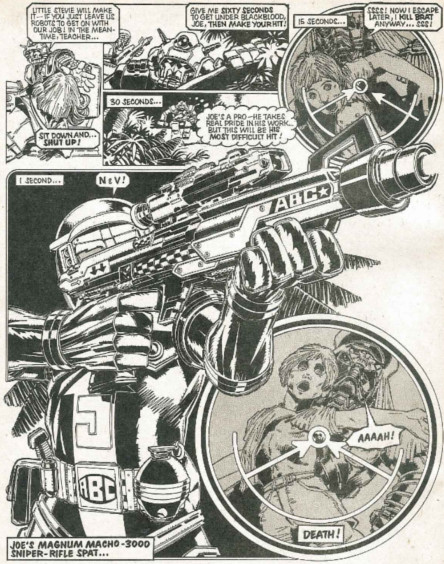 The robots are gloriously unrepentant in the way they chew bullets for breakfast and spit them back out again. One of the robots even has a gun with the ridiculous name of the Magnum Macho-300 Sniper Rifle. Miss Sweet warms to the robots when they kill the enemy robot that massacred her town, saving a child’s life in the process. But this new respect soon turns to disgust when she finds out that Hammerstein intends to bring the evil robot back to life and add him to his team.

Then comes Project Overkill, which is another excellent strip. It tells the story of the birth of AI, but as part of a government conspiracy reminiscent of the cover up of the discovery of aliens. It is ambitious stuff, and I wouldn’t mind if they dragged it out a little more, instead of rushing the strip to a conclusion. Dan Dare gets the same treatment, being rushed to some kind of conclusion, too. Next week, 2000 AD is being merged with a failed comic book called Tornado. Dan Dare and Project Overkill are being nixed to make room for a couple of the defunct comic book’s stories.

The merger of 2000 AD with Tornado means that this is the last time that the name Starlord will appear on the cover of a British comic book. I started reading sci-fi comic books with Starlord so this was a big deal for me at the time, and it still gives me pause all these years later. A sad day. 2000 AD would never be the same again after losing the joint title of Starlord from the cover, but we will keep reading, won’t we?
Labels: 2000 AD British Comic Book