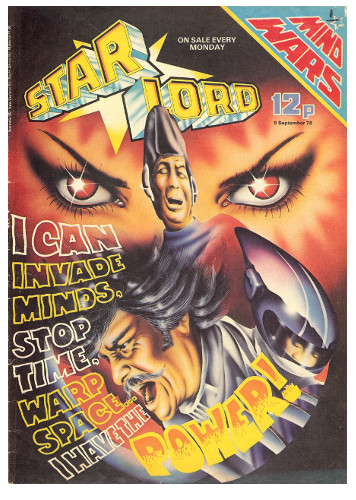 Regular visitors to this site will know that I am currently rereading an old comic book from my childhood that went by the name of Starlord. This is the eighteenth installment in this series of posts, and I’m planning for there too be many more to come. You can read this vintage comic book too, because scans of the entire run of the comic are available at Starlordcomic.com.

Starlord is great, especially considering how long ago it was published, but not every single issue was perfect, and this is one of the ones that didn’t quite capture the magic as well as many of the others. The cover of issue 18 of Starlord, for example, is a horrible, airbrushed mess. After a string of strong covers it’s a real disappointment. One nice thing though is that the font they use for Mind Wars, the title of the strip that features inside the comic, is using so reminiscent of Star Wars it leaves you in no doubt where Mind Wars gets its inspiration from.


As usual Mind Wars is also the first story presented, and also as usual the art by Jesus Redondo is frighteningly skilled. This strip is written by Alan Hebden and is a cut above anything else in the comic this week. Mind Wars was is a forgotten classic of space opera. 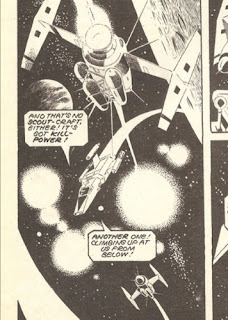 The next strip, Ro-Busters, is usually my favorite, but this week it isn’t firing on all cylinders. It’s still quite fun, though, with some space action that is very reminiscent of the dogfighting between TIE fighters and x-wings and y-wings in Star Wars. I’m not upset at the blatant plagiarism of the starship designs, I’m just enjoying his it makes the strip look so dated, really fixing it in its 7Os time period. 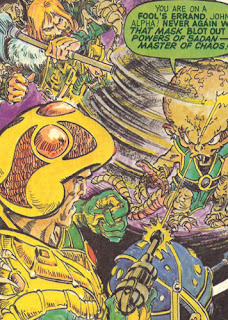 Strontium Dig is the next strip, and it is being drawn this week by the mighty Ian Gibson, who would go on to have a huge career in comics. I had totally forgotten that his work ever appeared in Starlord, so it was a nice surprise for me to see it again.

Ian Gibson is best known for his black-and-white work for 2000 AD later, in the 1980s, especially as the main artist on Robo-Hunter and The Ballad of Halo Jones, as well as his long run on Judge Dredd. Gibson then made a name for himself in the US, drawing Mister Miracle for DC Comics. According to Wikipedia, since 2000, Gibson has mostly been drawing Judge Dredd and the revived Robo-Hunter series starring Sam Slade's daughter, Samantha. And the Wikipedia page also says that he regularly contributes articles and rants to the Den of Geek website about the state of today's comics industry.

I don’t like his work as much as I used to. I find his art a little bland now, and the way he draws women especially is objectifying, but there is no denying his talent, and I remember liking his work a lot back in 1978.

This isn’t an especially memorable issue of Starlord, what with the week cover and mixed bag of artists, and it isn’t lifted above the ordinary by the final strip, Holocaust, that’s for sure. Holocaust is badly drawn and aggressively dumb. I’ve complained about it before in these recaps of Starlord, so you’ll be glad to hear that I’m not going to bother this time. 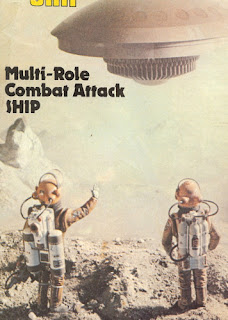 The back cover is number five in the series of Hardware Profiles, and it is yet another flying saucer. I have to guess that they didn't have many photos to choose from to use for this back cover feature, because after the promise of the first one, a cool futuristic tank, and the third, a sort of jet fighter catapult, the rest have been less inspiring rockets and saucers. The model making on display has never been anything less than amazing, of course, but the models themselves need more interest and detail.

The high point of this comic was seeing Gibson’s work. It is great to remember all the good work this artist would go on to do after Starlord. He is and was problematic to be sure, but so talented.
Labels: British Comic Book Prog Slog Starlord