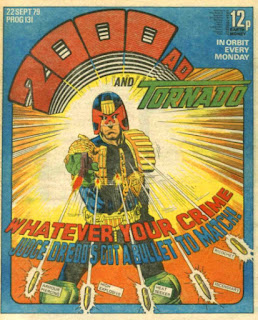 I write a lot about 2000 AD (the posts are collected on a special 2000 AD page). This time I'm talking about issue 131, which was published way back on the 22 September 1979, for the princely sum of 12p, and it has a classic cover. It shows the most popular character in the comic, Judge Dredd, firing his special gun, a lawgiver, directly at the reader. Five special types of bullet are shown flying out of the frame, armor piercing, high explosive, heat seeker, incendiary, and ricochet. It’s a ridiculous idea for a gun design, because the gun would need so much ammo it would have a magazine bigger than an AK-47’s. What’s more, the magazine is located in front of the trigger, which means the gun has a shorter barrel and is therefore less accurate. 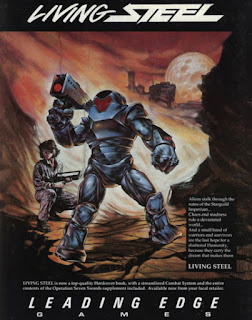 I’m not a gun nut, and I totally support gun control, I just know this stuff because of a youth misspent playing RPGs such as Living Steel, which went into extreme detail about the weapons used by the characters.

Living Steel was a high-tech role-playing game that appeared as a box set in 1987, but is now long out of print and the publisher defunct. The game is set in 2349 on an isolated human populated planet where a small number of highly trained soldiers awake from cryonic storage and begin to rebuild a defeated society. Player Characters are armed with Powered Armour and a variety of other high-tech weapons and gadgets which make them extremely powerful.

Living Steel had a setting that intrigued me, but fully 70% of the rules was about the guns, as far as I remember. Reading the rule books (of this game and others) turned me into a gun expert, of sorts. I didn’t know all this guns stuff way back when the comic book came out in 1979 though, as Living Steel came out ten years later, but I could tell on an instinctive level the gun on the comic book cover was a crappy design... but you can’t say it isn’t futuristic. 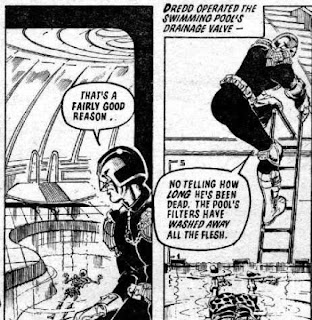 Inside the comic book, the Judge Dredd strip is drawn by Ron Smith, a hit and miss artist who is capable of great images. The futuristic highway he imagines for this strip are beautiful, but he also draws strange, lumpy, fleshy faces. He also likes to draw huge, fleshy asses right in the middle of a panel. He is undoubtedly talented, but little things like this keep relocating him, at least in my mind, to a lower rung of artists than some of the greats who have worked on 2000 AD. 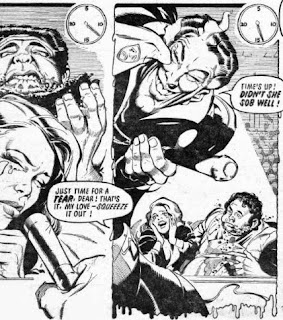 The strip is a good one, and very much of its time, including the host of the crazy show in the strip, and his catchphrase. Didn’t she do well was the catch phrase of Bruce Forsyth on the Generation Game at the tame, a nice little blast of 70s nostalgia. The words are changed a little and used on a future TV show where people tell sob stories and get rewarded with cash from the viewing public. It's a format that would probably work well on today's TV.

Blackhawk is the next story and, as usual, it is a compete waste of time. The sooner it gets dropped the better. 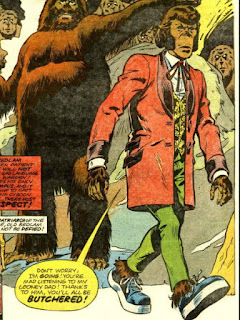 In ABC Warriors, which is up next, we get an even better look than last week at a Teddy Boy monkey from Mars. It makes sense if you read the strip, sort of. It’s hugely anachronistic, as even though a few Teddy Boys were still about in the late 70s, it is hard to imagine that anyone would think the style would survive long enough to be found in the far future on genetically engineered monkeys on Mars. 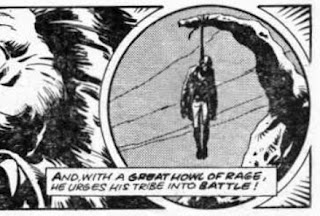 Also, even in a comic book about all sorts of violence and mayhem, there is a very extreme image in this issue. I’m always uncomfortable with imagery of lynchings and hangings. I doubt people in the UK in the 70s were as sensitive, but in this day and age, stories like this are far from fun reading. Even if the creature getting hanged is a genetically modified animal in a story about the future, you can’t help thinking about strange fruit.

The Mind of Wolfie Smith comes next, and there is a new artist working on it, credited as Vano. He’s not bad, but it’s hard to imagine him doing a sci-fi comic long-term. Along with the story that follows it, Disaster 1999!, it is a ho-hum reading experience. Neither story has particularly strong sci-fi elements, and nothing much else going on to make up for that lack. That’s not too much of a problem though because this issue of 2000 AD was well worth the cover price for Judge Dredd and ABC Warriors alone. Now that it can be found and downloaded on the Internet for free, it is even more of a bargain.