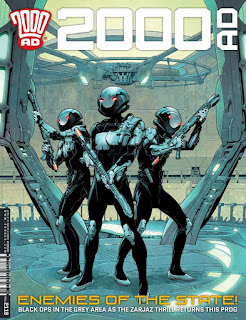 Issue 2118 has a beautiful, complex, and sci-fi-looking cover. It relates to a story I don't know at all, but immediately I want to read it. I want to know why these three people are posing moodily in a dark, industrial space. 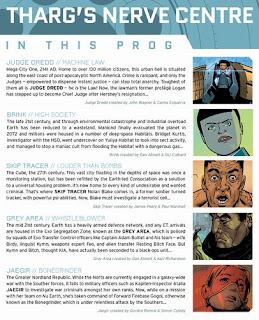 As I said last issue, I never read the editorial page, but as I swiped past it I saw that it lists the stories in the issue, along with a little vignette. I saw from these images that Brink is in this issue, and I'm keen to get to it, having enjoyed it very much last issue. Along with never reading editorial pages, however, another rule I have about anthology comics, like 2000 AD, is I always read the stories in order, even if my favorite isn't first.

This week, first up as usual is Judge Dredd, which I wasn't impressed with last week but rules are rules, it must be read first. This installment continues on from last, with no change to art or writer. Hershey appears this week, and while Dredd has become an old geezer, Hershey looks young, really young. Like maybe they are still using Botox in the future. 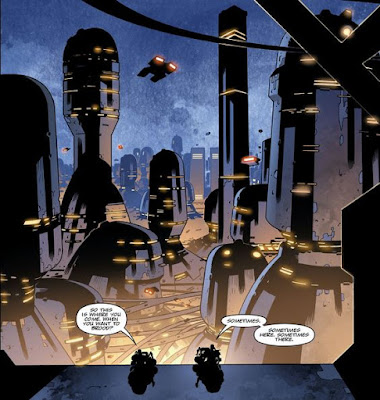 They both have dirt all over their bikes and uniforms though, which I still don't approve of. Even the Hall of Justice is spattered in dirt, which is just not right, no way. That place would be polished to a dazzling shine, like in a Ron Smith illustration. But ignoring small quibbles with the art, Megacity One looks simply wonderful, grim and shiny, and futuristic all at the same time.

The story, too, about robot judges, moves along nicely, with a good sense of foreboding building. Dredd thinks what's happening with the introduction of robot judges is a mistake, and Dredd is usually right about when things are about to hit the fan, so I predict it won’t be long before Megacity One has its next robot uprising.


Then we get to Brink, and I enjoyed last episode, even though it was just a chat at a hospital bedisde. There were ideas in it, and lots of sci-fi concepts to play with. This week's installment starts with an establishing shot of a space habitat, just like last week, but a different one. 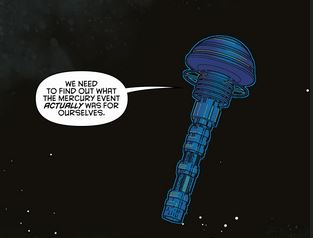 It hadn't registered with me that there was more than one habitat, so that was a nice realization for somebody coming to this story mid-run. Again the story explores the idea of "weird life" a concept I have never come across before, again mostly via conversation in sparse, austere rooms. I would be against the static, conversation in a room, format of the strip if the ideas weren't so interesting. As it is, I'm riveted, and can't wait for next week.

Next comes Skip Tracer, and after two episodes I still have no idea what is going on or why.  It looks like some bog-standard cyberpunk, like Altered Carbon, or something. But maybe the hero has superpowers - who knows. I'm officially jumped back in with 2000 AD now, so I guess I'll work out what's going on as the weeks go by.

Next we get to the story that the image we saw on the cover comes from. It is called Grey Area, with the UK English spelling of Gray. The pages are dense, with what seems like hundreds of panels per page, and the art is nice. It's like a mixture of manga and speed painting.

The story itself seemed over-expositional but I enjoyed it. It looks like we're going to get a fugitives vs faceless and pervasive government forces story, which I'm all in for, especially with such nice art to go with it.

Jaegir is the last story and it's great. I'm a big fan of military sci-fi and this story does it well. By the end of episode two, the situation is becoming clear to Jaegir, just as it is to us, and it seems hopeless. It’s reminiscent of the famous Battlestar episode 33. It worked very well as a plot for the sci-fi show - winning the 2005 Hugo Award for Best Dramatic Presentation, Short Form - and I was sad to see them drop the idea, though I do understand it was unsustainable over a whole series. I imagine it will work just as well in the comic book.

This is some very nice writing, and I enjoyed it, and the entire issue enormously. That "Weird Life" thing, by the way, is a real thing, I found a NYT article about it. I'm so much jumped back in with 2000 AD. I only wonder how long I will last this time before losing interest and starting to miss issues. We shall see.