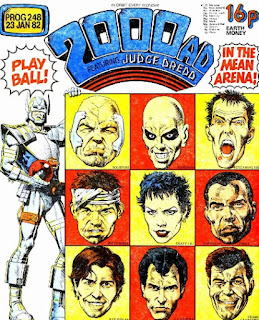 This issue has an absolutely iconic cover. I mean, it's an ancient and crazy comic book from back in the dim dawning of the 1980s, so probably nobody cares, but still, it is iconic.

What we see is a team of athletes from the future, who play a weird game that is half war, half rugby, through the deserted streets of a city block or two that have been cleared for the purpose. It's called Mean Arena, and it is bonkers. The team of players look like they have bags of character - they don't - but the cover makes it look that way.

The first story inside is Ace Trucking, and there is a nice panel that gives an idea of the scale of the cargo ship in the story. The crew stand in front of it on a landing pad, and it makes them look like ants. It is as big as a modern day container ship. I like it a lot.

Then comes the Mean Arena story featured on the cover, which is about a team of players of the future sport who have had plastic surgery to look like aliens. It's a dumb idea in a strip that never shies away from stupid notions.

Next comes Judge Dredd  and it carries on the epic story of future nuclear war. It's grim, but interesting, however the next strip was the one that, of this issue, most caught my attention. It's called Nemesis the Warlock.

Nemesis the Warlock is about xenophobic humans killing aliens and the art, by Redondo, is a thing of beauty. It's not O'Neil, the quintessential Nemesis artist, but it is good. It is more realistic than O'Neil's work, almost like it is images of actual events, while O'Neil's art is what is created after, to illustrate the stories told. The Redondo work is small scale and feasible, while O'Neil's is mythic and grand.

The issue is rounded out by some proto-cyberpunk from Rogue Trooper. And that's it for issue 248. It's not a classic, but that cover is something else.