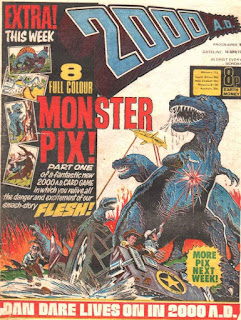 The cover of issue eight is a reprint of an interior splash page from an earlier issue. It is a very nice one, featuring the dinosaurs and time traveling cowboys of the Flesh strip, but it is also a surprise to me. I did not know that early issues of 2000 AD cut corners this way. Surely kids of the late 1970s would have felt cheated at this behavior, but who knows. 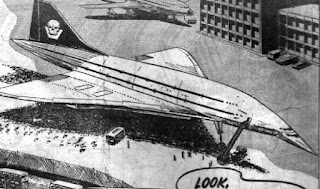 The first story is Invasion, which is a bunch of macho malarkey, but there is an interesting cameo in this episode, the Concord Mk III. It is beautifully drawn, and quite convincing as a design for a supersonic airliner of the future. 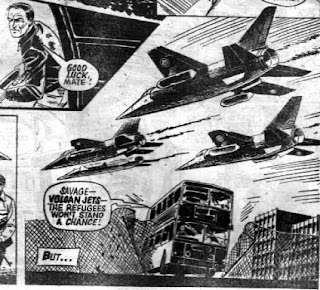 Volgans in jets turn up to prevent Savage stealing the Concorde, and they are modeled on Mirages. The action here is bonkers, as usual, but the drawings of the jets are beautiful. I was a fan of Mirages, after reading the terrible Wilbur Smith book, Eagle in the Sky.

I got myself a Mirage kit, the one shown in the image above, with glorious box art, and made it. I took photographs of it, which was difficult because my camera manual told me that objects had to be two meters from the lens to be in focus. I remember my disappointment at the camera's limitations very well. The camera was a Kodak Disc camera. Trying to get good shots, I became an expert on the Mirage, and can recognize one from any angle. I also painted one at school, much to the confusion of my art teacher.

The next story is Flesh, and as usual it starts with a great splash page. This time we have a giant, prehistoric snake attacking a top-hatted drunken and incompetent doctor. It's nicely drawn, with dark ink heavy on the page with all the detail. 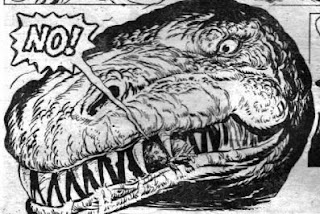 The bad guy, Claw Carver, throws one of his own men into the path of a dinosaur to save his own skin, and there follows a great image of the guy trapped behind a row of tyrannosaur teeth, like the bars of a prison. It's ridiculous, sure, but fun.

The artist seems to be getting tired of drawing old one eye, the tyrannosaurs chasing out hero like the crocodile from Peter Pan chases Captain Hook. The monster keeps getting more rounded and bloated. Either it is laziness, or he is being influenced by Kirby's devil dinosaur, which also had an unlikely, bulbous appearance. 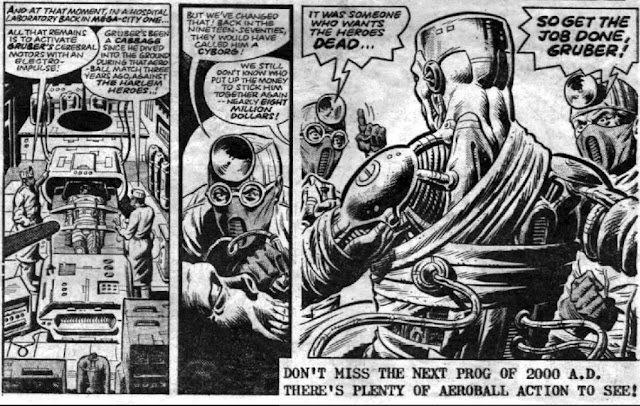 Next up is Harlem Heroes, and they are still fighting a team of Russian clones called Boris 1, Boris 2, etc. They win and we see the next match foreshadowed. A monster called Gruber is brought back to life, wonderfully drawn by Gibbons? The medics say nice dialogue, such as:

Back in the nineteen seventies they would have called him a cyborg.

But, of course, this comic book was published back in the nineteen-seventies. The lead surgeon is a nice design too, with a face entirely covered in a fabric mask, and a very anachronistic doctor's reflective mirror on his head.