This issue of 2000 AD, a comic book I write a lot about, has a great cover. It is a real work of art, with a mishmash of the Bermuda Triangle, a flood in Washington, and a stricken aircraft. It is very 1970s, screams action and mystery, and is very nicely drawn, too. I can’t wait to open it up and take a look inside. Reading 2000 AD was a very formative experience for me, and I still read it today. I have a 2000 AD page where I link to all the issues I have talked about on this site.Anyway, on to this week's issue. 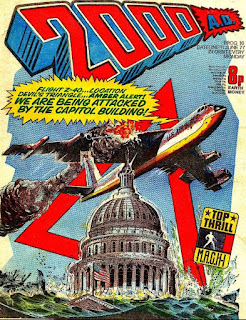 The first story is Invasion, where in a world of futuristic, prototype cars, the hero, Bill Savage, drives an old-style ford transit. Unfortunately he drives it into an obvious trap. This issue the Volgan bad guys have hired an Australian big game hunter called Quarry to kill Savage, and it is the Australian who set the trap. It’s pretty crazy, more like the plot of a superhero strip rather than the more realistic tone that Invasion usually attempts. 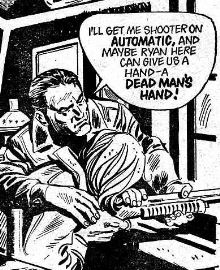 From this only semi-realistic start, things go even further down hill, as Savage sets his shotgun to automatic (huh, how’s that supposed to work?) and sneaks away as the gun fires itself. It doesn't make any sense, and there is no futuristic excuse given for it. Guns can suddenly just fire themselves, like it’s dream or something.


The hunter is soon chasing Savage in a zebra-stripe Range Rover. In a twist I should have seen coming, Savage forces Quarry to crash into a... quarry. It's stupid, sure, but it's good stupid. This strip was only tangentially connected to reality, but it did put a smile on my face. 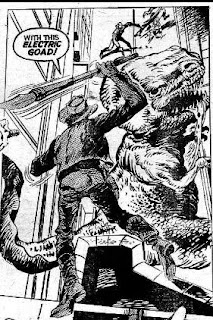 Flesh is next, and the chaos continues. The art is high energy, but not tightly executed, which I’m in two minds about. Looking at it positively, it is so loose and sketchy that it looks almost Cubist, but that means (on a purely practical level) it is difficult to tell where things are in relation to each other. All this makes the strip quite sophisticated looking... for a story about dinosaurs eating cowboys, at least. It’s possible I’m overthinking this. The focus of the story’s action is a battle between one cowboy, named Reagan, and a T-rex named old one eye. Ridiculously, Reagan actually holds his own for a while, before a ‘flesh dozer’ grabs the dinosaur.

The beast escapes, and eats the base controller, while Reagan falls into a spiderweb and gets poisoned by a giant spider. Flesh is, as ever, a brutal and unpredictable delight. Even though Reagan, the presumable hero, is dead, the strip is coming back next week. I can't wait to see what will be going on. I only hope they don’t somehow bring him back to life. 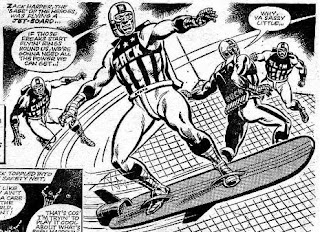 Harlem Heroes is next, and it has been a little dull lately. Thankfully the writer on this issue works against that by introducing a team of robots and a jet powered surfboard. This is the best this very controlled strip has been in a long while, and I hope it keeps going in this more gonzo direction. 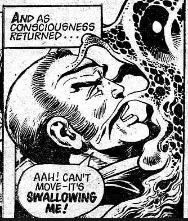 Dan Dare comes next, with a very inventive 90 degree flipped center speed, showing a hollow planet interior. Then Dan Dare is threatened with interrogation by some Cthonian blob creature, beautifully drawn and evocatively described. This is great space opera, of a loosey-goosey, Flash Gordon type. Theoretically it should be my favorite strip, what with my love of spaceships and power swords, but there is something generic about Dan Dare compared to the other, more idiosyncratic and characterful strips in these early issues of 2000 AD. It is no wonder that Dan Dare would eventually be sidelines, even though at this point he is still obviously considered the ‘star’ of the comic book. 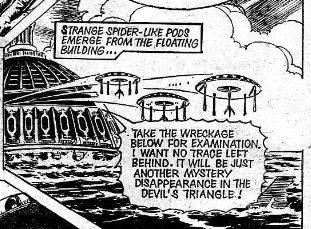 Next comes M.A.C.H.1, the story that the image on the cover comes from. After abominable snowmen last issue, and with the Bermuda Triangle this time, this strip could not be more redolent of the 1970s and the fads of the period. M.A.C.H.1 is a super-spy strip that is usually somewhat down to earth, but this episode is as out there as any of the other sci-fi strips in the comic book. There is a secret undersea base, designed to look like the Capitol Building in Washington, which is a fascinatingly bonkers concept. This is exactly the sort of convoluted and unlikely stuff I like, and it really started drawing me in, despite its pulpy, B-movie faults. But then... 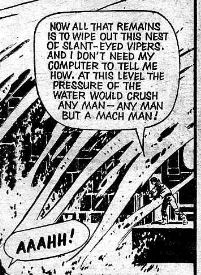 I was quite enjoying the story, in an absentminded way, when the hero calls the minions of the mad scientist big bad "slant eyed vipers". Ouch, that's some overt and nasty racism. It's a real shame, because the comic had been shaping up to be a classic until that point. 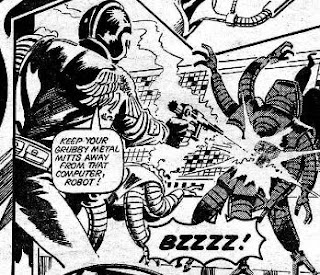 Judge Dredd rounds out the issue, with the robot rebellion that has been plaguing Dredd’s future city for weeks now almost crushed. Apparently the only thing left is a showdown next issue. The art wasn't great, and still off balance because of the racism in the previous strip, I found it hard to concentrate on. I have talked before about how 2000 ADs from the 1970s are a problematic fave, and I have decided to keep reading them despite the racism and sexism to be found within its pages.