Here is yet another post about 2000 AD (I have a 2000 AD page where I link to all the issues I have talked about on this site already). This particular issue was published in June 1977, which is obviously a very long time ago, and which also means that it does not read like a modern comic book. It is problematic in lots of different ways, but there is enjoyment to be had – even if a lot of that enjoyment comes from pure nostalgia. 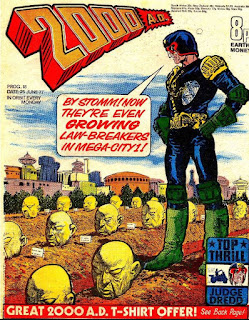 This issue has a wonderful cover, showcasing Judge Dredd. Now, after almost twenty issues, the publishers have to be starting to realize that Judge Dredd is the undisputed star of the entire comic book. Here Dredd is drawn by Mike McMahon, for my money the artist with the best take on this iconic character. This is an early stage in the evolution of the Dredd look, but it is already an extreme and Gothic creation. Later the character's uniform will become ever more exaggerated, but here the early subdued version is still iconic. The setting is great too, with Dredd standing in a cabbage patch, except the cabbages are heads. It’s the sort of high-concept image you would see on the cover of a 1960s or 1970s sci-fi novel.

Even though, as I said, the editors have to have been starting to realize that Judge Dredd was their star, he has still not been given his usual spot as the first story in the comic. Instead, the first story this issue is Invasion, which is a war story, of the type very popular at the time in comic books aimed at boys. The only thing that makes it futuristic is that the action is set in the UK almost thirty years in the future – the UK of 1999 – rather than thirty years in the past – mainland Europe of WWII. Thinking about that makes me suddenly realize that 1977 is a date nearer to WWII than it is to now. World War II must have been as fresh in the minds of the adults of the time, including the writers and artists of this comic book, as Operation Desert Storm is to us.

The story is quite sophisticated, with the invaders using ex-police and their networks of informants to find the resistance. Until suddenly it isn’t the least bit sophisticated and all hell breaks loose. The Volgans – who are thinly disguised Russians, and who have invaded the UK – come with tanks and patrol boats to capture Savage and his team of resistance fighters. The resistance fight back by jumping an articulated truck onto two tanks. They then break out of the trap in a convoy of futuristic 1999 cars. It doesn't sound like a great escape plan, and it isn’t a huge success. Half the resistance get killed in the confrontation.

FLESH is the next story, and it is much more futuristic and much less grounded than Invasion. This strip is a cowboy story, which were old-fashioned and fading in popularity in the UK at the time (though they are still widely read in Europe). To make it a futuristic Wild West story the cowboys have been sent through time to drive dinosaurs instead of cattle. It is a very strange idea, born of marrying the fading genre of Western stories with the newly-popular genre of sci-fi. And it works. Flesh was always one of my favorite stories and it is shocking to consider how short its run was. This is issue 18 and already this is the penultimate installment of Flesh. In this issue, things have gone badly wrong with the time-traveling, dinosaur herding business. The latest trip through time has resulted in three time travelers being melded genetically - like in The Fly - but with a tyrannosaurus. It is a crazy idea and the visuals created for the story are no less dumb. Then the guy running the time machine calmly says he has seen worse things appear. Worse than a tyrannosaurus with three human heads. Like I said, dumb, but dumb in an entertaining way.

Next wee see the first female character in the story, and her dialogue is EEEK! This is, as usual, not shaping up to be an issue that is going to come anywhere near passing the Bechdel test. The dinosaurs, including the three-headed one, are soon shot down. Then it comes time to apportion blame for this fiasco, and our hero, Reagan, must go in front of the justice machine. It seems he is going to end up with a long prison sentence – but wait, there is one more episode next week, so maybe he will be recognized as hero yet.

The formula for boys’ comic books in the UK at the time was a mix of war stories, Wild West adventure, and sport. 2000 AD at this period just takes these conventional story genres and adds a veneer of sci-fi to them, with varying results. The third story this week is Harlem Heroes, which is a sport story, but with a veneer of sci-fi. The sport is played with jet packs and games tend to have a body count. It is not gladiatorial in a Death Race 2000 way. It is just that accidents do happen. This week, for example, the Heroes’ opposing team is fielding a ringer in the form of a homicidal cyborg with a grudge.

The cyborg slashes at the Heroes with Freddy-Krueger-style retractable claws, but both teams ignore that and get on with the game. I’m not usually a fan of sports stories but Harlem Heroes is a superior example of the genre especially the intricate art by Gibbons, and this episode is enjoyable enough. 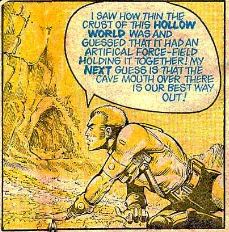 Next comes Dan Dare, a classic sci-fi character from the 50s and 60s brought back for 2000 AD, and it is the most generic story in the comic book. It’s not bad exactly, but it doesn’t have the bonkers energy of the other stories. It starts, for example, with the resolution of a literal cliff hanger. Last issue Dare was tossed into a pit, and this issue there luckily turns out to be a net-like force field at the bottom to catch him, yawn. The rest of the story is no better, with a series of escapes and recaptures before Dan steals a spaceship and finally escapes for real. Reading this story, with its vague and unlikely world building and theatricality is like watching a 1930s serial such as Flash Gordon. I even suspect that is the vibe they are intentionally shooting for and, if so, they can consider this strip a success. Unfortunately for Dare, tastes in sci-fi had moved on even by the 1970s, and Dan Dare was never again to regain his 1950s and 1960s popularity.

The next story is M.A.C.H.1, who is a super spy given his powers by acupuncture. This is usually brainless action in the style of the A-Team, except people die. It is actually surprisingly enjoyable when it isn’t being racist. This episode is set in South America, so apprehension sets in as you start to read about what xenophobic tropes might crop up. Luckily this issue seems to avoid too much problematic stuff, except for a lazy, stereotypical German terrorist. So we can relax and enjoy the show.

M.A.C.H.1 has a computer embedded in his brain, and having its deadpan commentary on his extremely violent shenanigans is often, probably unintentionally, extremely funny. For me, this juxtaposition is just priceless, producing dialog like: Subjects received extensive scalding prior to termination by Mach 1 gunfire. Which is in a small box in the corner of a from depicting a split second of violent mayhem.

Another interesting thing about M.A.C.H.1 is its love of hardware. In this issue we see a helicopter that looks a lot like an Apache. The Apache had its first flight only two years previously, so the strip is continuing the tradition of featuring cutting-edge military hardware in the morass of macho nonsense. This strip also features a single female character and her dialogue is, "Please don't hurt me," before giving M.A.C.H.1 directions to his target. Yeesh, 2000 AD from this period is a problematic fave. 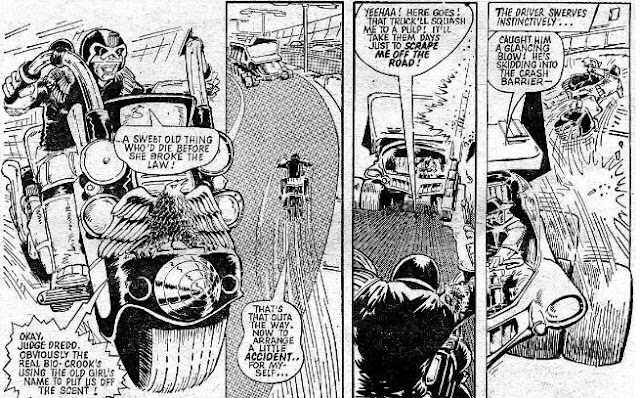 Next comes Judge Dredd, with a great story about bio-engineering novelty plants with brains that can sing songs. This is 100% going to happen in the future. It's a macabre little story made so much better by the way we can see McMahon inventing Mega City One out of whole cloth as Judge Dredd travels round it. The city he invents is influenced by Ezquerra, to be sure, but he makes it something of his own. He takes Ezquerra’s organic designs and makes them into something beautifully futuristic, plastic, and shiny, but grim at the same time. What a talent McMahon is. We also see riot foam used here for the first time - a gadget that will crop up more and more in future episodes of this strip. 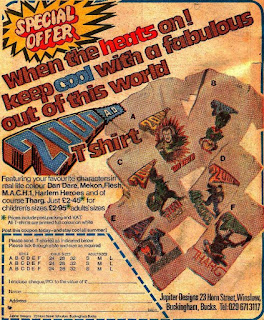 On the back of the comic book is an advert for 2000 AD branded T-shirts, and they are magnificent. I would buy the FLESH design right now if it was available anywhere. It’s interesting to see that there isn’t a Judge Dredd shirt, which just goes to show that nobody yet foresaw how massive this character was going to become.