In this blog I come back again and again to a comic book called 2000 AD. Reading it back in the 1970s and 1980s was a very formative experience for me, and I still read it today.  Because of my love of this publication I’m currently reading Thrill Power Overload, a book that recounts the history of 2000 AD. It’s an interesting read, with lots of exclusive interviews that really give an insight into the office politics and creative processes behind the scenes. There are decades of history contained within the book’s covers, and I have just been reading about the 1990s. There was a brief mention in that section of the book of a character called Bix Barton, and I remember enjoying his adventures at the time. The book also mentions his first appearance in the comic book, which was issue 663, so I went straight over to British Comics at Wordpress to download a few scans, and read it again, after thirty years. 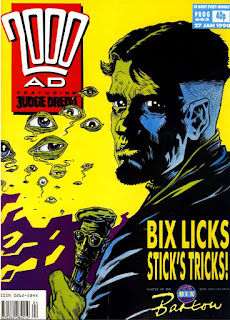 Of course, as usual, I won’t just be reading Bix Barton. I’ll be reading the entire issue, which was published 27th January, 1990, and cost the enormous sum of 40 pence, Earth money .

Befitting his first appearance, Bix Barton has been given the cover of the comic book, with art by Jim McCarthy. It is a very striking cover, and the flying eyes immediately hint at magic and psychedelia. However... the hero’s haircut is a little unfortunate. It’s short on the sides and long on the top that may have been innocent enough back in the 1990s but now makes the wearer look like a hipster or Nazi. It’s the defining look of today’s white nationalists, or the ‘alt-right’ as they have tried to rebrand themselves. This is their signature haircut, and it is referred to by many wearers as a fashy.
Of course I assumed Bix Barton hadn't chosen his haircut because it was associated with being a Nazi. I assumed he wore it because it has its origins in Victorian England, but in the story inside the comic he says he discovered the secret of immortality in the 1930s. Oh dear. Anyway, whatever the artist’s intent behind this choice of haircut, in the current climate it is a little unfortunate.
The first strip in the issue is Chopper by John Wagner, with art by Colin MacNeil, colored by Tim Perkins. Marlon ‘Chopper’ Shakespeare, is competing in Super Surf 11 which is taking place in Megacity 2. The event includes snipers, spikes, rockets, lasers, and almost certain death, making it brutal, even by the standards of 2000 AD. In this episode we see Chopper enter a hole full of spikes, where he gets gashed but makes it through... only to be struck multiple times by bullets on the other side. His girlfriend, Charlene, runs to help. He’s down but still on his board. The contestants in joint second place collide and are graphically impaled by spikes. It is attractive enough, being painted and all, and the story is gripping, but the art doesn't give much detail of the city the contestants are supposed to be flying through. There is no establishing shot of the building with the spike hole, and no idea is given of where the snipers might be who take Chopper out at the end of the episode. For a story so driven by action, it is strange that it is told using small boxes with talking heads in them. 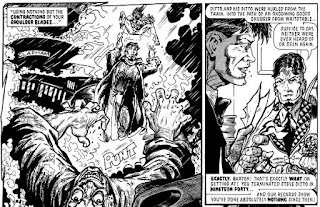 Bix Barton by Peter Milligan, with art by Jim McCarthy, is next. Bix is mysterious, and clearly intended to be humorous, in a gentle-humor sort of way, and he also has a lot of Holmes in his DNA, making him an engaging character to spend time with. This episode is mostly an introduction to the character, who we find out suspends his aging processes using nightly immersions in a tub full of chemicals, is the sole employee of Her Majesty's Government's Department of the Irrational, and has a sidekick that is a walking stick called Michael Cane. It is the same weird mix I remember and I enjoyed reading this installment. I think it holds up very well. The question is whether it will continue to hold the attention when I gets to the business of telling a story, rather than the world building we see here. The art, however, is just not good. It is inventive and fun to look at but the characters are samey and the spatial relationships so confused the world of the strip looks almost two dimensional. It is hard to work out what is even happening sometimes, but if I remember correctly, the art does improve a lot in later episodes.

Judge Dredd comes next, in a story called Tale of the Dead Man, by John Wagner. It’s a fascinating story, with a lot of depth. Here we have an aging Dredd training his replacement, which is a situation that can’t help but be full of tension. It is unfortunately let down by some truly terrible art, however. Nether the art on Chopper or Bix Barton is of the level of the great artists that have come before in 2000 AD, but at least they are of a professional, if flawed, standard. This mess isn't even that.

There is then a Tharg's Future Shocks by Ian Rimmer, with art by Art Wetherall. The art is okay and the story is the usual format of generic sci-fi with a twist ending. It’s not great, but the again the Future Shocks rarely are. 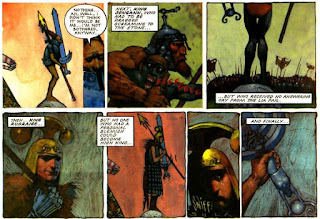 Slaine: The Horned God Book II by Pat Mills, with art by Simon Bisley is next, and I remember not being impressed with it at the time. I must admit that I am still not a fan today. The story in this episode is told in dense text boxes, which is hardly dynamic, and the art is nicely painted but extremely lacking in detail. Most of the images don’t even have a background, just solid colors and pretty swirls of paint. Bisley is a superstar of comic book art, but I never got along with his Heavy Metal sensibilities. 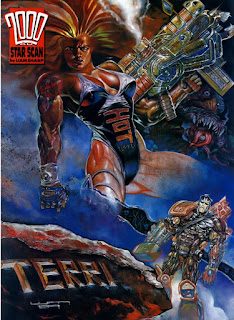 Whatever Bisley's failings, his greatest sin of course is the artists that followed him. There have been many since making careers attempting to ape his style, and the back cover of this very issue has an astonishingly bad example of just such a Bisley acolyte. It’s an image by Liam Sharp depicting a character from the ABC Warriors, obviously done before Liam went off to the United States to work on books such as Venom and Spawn: The Dark Ages. Sharp has also worked on more mature themed books for Verotik, doing GOTH, Jaguar God and a strip for Heavy Metal magazine that featured Playboy model Tiffany Taylor. The image is a hideous brown mess, featuring some cheesecake art, big guns, and one of the most insipid renderings of Hammerstein I have ever seen. These are all trends started by Bisley, but here they are taken to new lows. To end, just a reminder that the best way to support this blog is to buy one of my books. Simply go over to Amazon, or Kobo and get one.
Labels: 2000 AD British Comic Book Comic Books Prog Slog