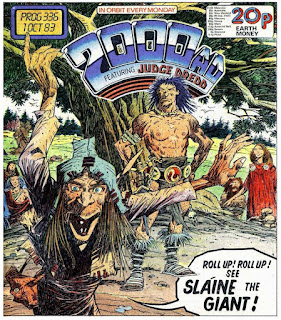 Issue 336 of the legendary comic book that goes by the name of 2000 AD was published in October of 1983, and it has an absolute peach of a cover, by the giant of British sci-fi comic-book art, Mike McMahon, but even so it is impossible for me to recommend reading it. 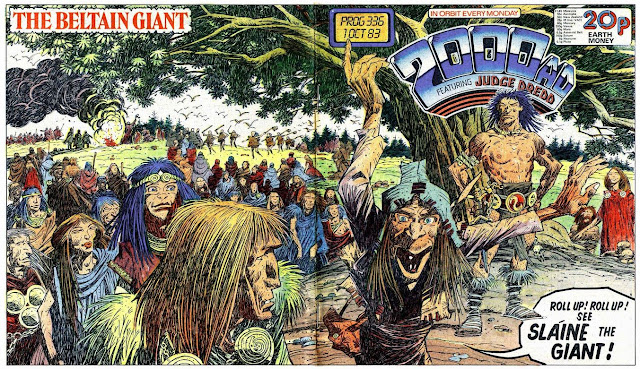 The cover is a real work of art, in color, that stretches across front and back cover of the comic, and is from Mike McMahon's Scratchy Period. Mike, like many great artists, has produced an oeuvre with definite changes and evolution in style that can be divided into periods. His most recent work is very abstract and geometric, but his early work was more interested in mark making, shading, and detail. That reaches its high point here, back in 1983, where even the shadows and deep blacks of am image are vibrant with jagged lines of shading.


The lines of McMahon's style are perfect for depicting the rough, raw materials of a medieval society, such as the hand-made fabrics, wattle and daub walls of huts, and the scarred hide of our hero, Slaine. Like I said, a great cover, but it hides within it a comic book with some serious problems. 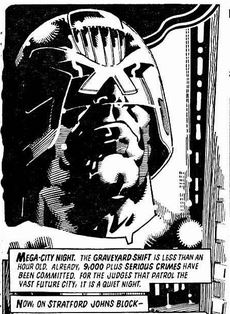 The first story this issue is Judge Dredd, and it is drawn by Ron Smith, an artist I don't rate in the first division of 2000 AD's roster, but who fits well enough for the chrome, shiny future city Dredd inhabits. He draws neon reflecting from a future lawman's shiny armor as well as anyone.

The story has Dredd presented with a range of future crimes and criminals, and he deals with them all by gunning down the perpetrators. He even uses incendiary ammunition in his summary execution of one of the criminals. It's a bleak and brutal read, and we will have to wait for the next issue to find out where this cavalcade of paramilitary police violence is heading.

The next story is the one featured on the cover, Slaine, and the art looks even better in black and white. Unfortunately, the story is nowhere near of the same level as the art. The dialogue is awful, too, including some homophobic slurs and some slut shaming and sexist language. Slaine's companion is also a money-grubbing, long-nosed dwarf, in line with the depiction Tolkien dreamed up, that Tolkien himself said was a depiction of Jewish people, transposed into a fantasy world - so homophobia, sexism and racism, all in one episode of one strip - that's not great. Then it turns out that the entire episode is just setting up a damsel-in-distress  story line to come, so... Great art, but the writing... Not so much. 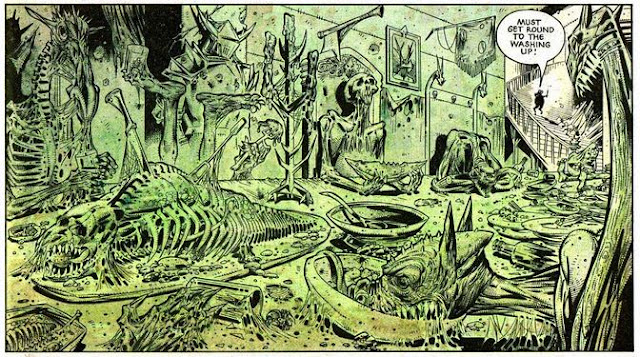 Next up is Nemesis the Warlock, and we have some art that is almost as amazing as that of McMahon, this time from the pen of O'Neil. O'Neil's art never changes, but he does what he does with such manic intensity that you have to admire it. This story too, hinges on a sexist trope, but this time we are not introduced to a damsel in distress but a jealous and manipulative woman, who is in love with the hero of the strip and about to deliver the woman he truly loves to his arch enemy, presumably for fridging.

Next comes Strontium Dog, drawn by Carlos Ezquerra, an old-school European artist, easily able to hold his own with British newcomers (back then) like McMahon and O'Neil. This is another virtuoso performance of sci-fi art. Johnny Alpha uses all his party tricks, including his X-ray eyes and a time bomb, in order to execute a criminal holed up in a saloon. Yes a saloon -Strontium Dog is a cowboy strip with sci-fi fixings. It even has a scene where instead of killing his target in cold blood, Alpha allows him a chance to dive for his gun, as he must dive for his own. He even fires it two handed, as if manually cocking the hammer. It's macho BS with no female characters, but it's fun.

Then comes Rogue Trooper, which is just appalling. It introduces a cheesecake female character in a Ursula-Andress-style bikini named Venus. Theoretically she is a genetically engineered soldier, just like Rogue, but she is described as a 'Doll', and as soon as there is any fighting, Rogue tells her to find cover. He then handles the man business of being s soldier. When their position is betrayed, it's because of smoke from where Venus has been cooking in the.kitchen. It's a level of sexism that boggles the mind.

After gazing in awe at the cover, I was really looking forward to reading this issue. Unfortunately the casual racism, sexism, and homophobia of the writers really took the wind out of my sails. I remember, back in the eighties, when I was a teen, that I didn't notice the racism and homophobia - to my shame - but even then I thought Venus was a little problematic.

It's issues like this that make me question the wisdom of returning and reading this dinosaur of a comic book, but that beautiful art keeps bringing me back.
Labels: 2000 AD British Comic Book Prog Slog